Home » Community and Society » Commonwealth Day celebrated around the globe

Commonwealth Day celebrated around the globe


Celebrations and events will be held across the world on Monday (March 11) to mark Commonwealth Day.

The day will feature everything from street parties to church services, from democracy debates to fashion shows as 2.4 billion people in 53 Commonwealth countries celebrate the history and values that bind them together. This year marks the 70th anniversary of the modern Commonwealth. In the 1949 London Declaration, leaders agreed that Commonwealth countries are “free and equal members of the Commonwealth of Nations, freely co-operating in the pursuit of peace, liberty and progress”. 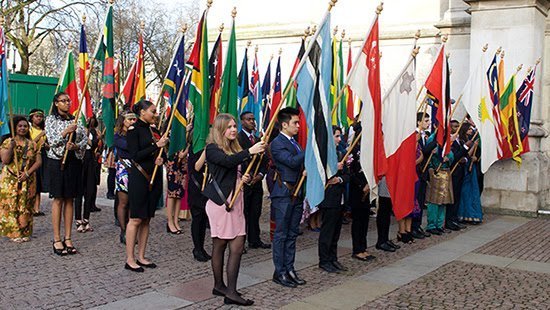 Her Majesty The Queen and HRH The Duke of Edinburgh attend The Commonwealth Service: A Celebration of the Commonwealth at Westminster Abbey. The Service was led by The Very Reverend Dr John Hall, Dean of Westminster..

This year’s event is centred around the theme of ‘A Connected Commonwealth’, highlighting how friendship, goodwill and collaboration among the Commonwealth’s culturally diverse members can be harnessed to tackle some of the planet’s biggest challenges – such as protecting natural resources and the environment.

Queen Elizabeth II, Head of the Commonwealth, has released a message to mark the occasion in which she says Commonwealth citizens can “look to the future with greater confidence and optimism as a result of the links that we share.”

She goes on to say: “With enduring commitment through times of great change, successive generations have demonstrated that whilst the goodwill for which the Commonwealth is renowned may be intangible, its impact is very real.”

The Queen, as Head of the Commonwealth, will join Secretary-General Patricia Scotland at Westminster Abbey for a multi-faith service to celebrate the day. It will include performances by the Grammy-winning British group, Clean Bandit, and tenor, Alfie Boe. Endurance swimmer and ocean advocate Lewis Pugh will also speak at the London event. The service will be broadcast live on BBC radio and television.

In her message the Secretary-General said the “dynamism and inclusiveness” of Commonwealth countries adds to the “rich and continuing narrative of Commonwealth connection”. She highlighted the Commonwealth Blue Charter, through which member countries work together to safeguard the ocean, as a great example of successful collaboration.