Home » Community and Society » Letter to the Editor:Speed Trap Island?

Most people who come here to visit from other developed countries were taught the speed limit was 15 mph in school zones, 25 mph in residential areas and progressed to 35 mph and up, depending on street conditions and location. It seems to me this island plan to stop excessive local speeders was put into effect with little more thought than a way to increase revenues; the term used in the states is “speed trap”. I fear tourists coming to visit our island will quickly dub us “the speed trap island” and I would not say, as it stands right now, I would blame them. When traveling down a road, most speed limits are fluid. Slower in busy congested areas and progressively faster as you get into less congested areas. Yet, from the bridge south there is not a single speed limit sign stating the legal limit everywhere is 15mph, NOT ONE!!! The only signs related to speed are “Slow, children playing” which most places mean to slow down, as this is a 15mph zone. Tourists do not intentionally try to break the law but how are they supposed to know that the commonsense speed limit rules they were taught that usually work in most other parts of the developed world, do not apply on Ambergris Caye? And how are they supposed to know what the speed limit is and how fast they are going anyway? The town board licenses businesses to rent vehicles to tourists. Yet the number one mode of transportation is golf carts which are not equipped with speedometers, even though most can easily travel at speeds of 20-25 mph and up. No speed limit signs and no speedometers in vehicles sure sounds like a government sponsored speed trap to me. My point being, 15 mph island-wide is not realistic or feasible, especially if you’re stuck behind a two or three exhaust pipe Polaris, or a taxi or big truck shooting a cloud of oil and gas from its exhaust pipe and need to pass for the sake of our health. Are we supposed to just suck it up or do we need to strap scuba tanks to our vehicles so we can breathe in these situations? There needs to be a commonsense solution when one is stuck in situations like that. Maybe we can just ban all these noisy, polluting passenger vehicles from the island completely. And as far as ticketing unsuspecting tourists. Most golf cart rental companies import golf carts with big tires which does help increase their speed. Some also “adjust” the governor to make them go even faster. I believe it is up to the Traffic Department to not license rental golf carts unless the company adjusts the governors to go no faster than 15mph or equip the carts with speedometers or stop writing out speeding tickets to anyone in a rented golf cart. This would be fairly simple to enforce in a very short period of time. Simply put, any person in a rental golf cart found speeding is not given a ticket (but must sign the bottom). The ticket for the infraction is made out to, and then delivered to the rental company who would be responsible for paying the fine out of their pocket. Problem pretty much solved overnight without imposing an unrealistic burden on our visitors. If the traffic department is unwilling to do this, I can only think of one alternative for tourists to be able to comply with the law. Decades ago, a man ran a mile in under four minutes meaning that he averaged 15 mph. Do they need to have someone in their group run beside their golf cart to make sure they aren’t speeding? What other choice are you leaving them with? 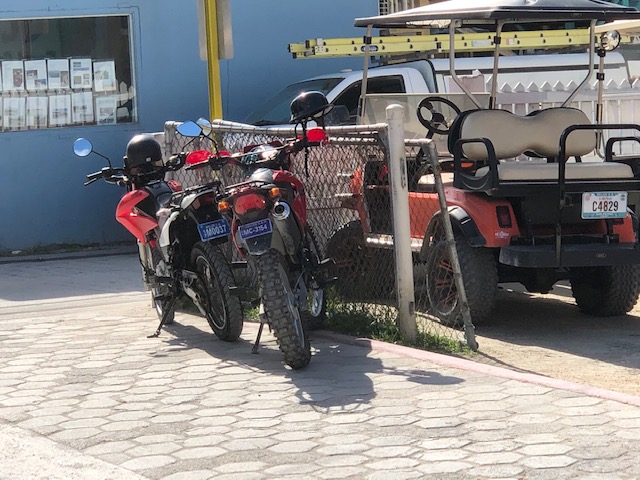 My next concern is that those who are responsible for enforcing the law act like they are above the laws they enforce. I’ll give you a couple of examples. As you can see in the accompanying picture that I snapped while driving thru town, these two government motorcycles are parked in a red zone. As I passed by forty-five minutes later to pay my cable bill, I saw a police and traffic officer come out of a restaurant and get on the motorcycles and drive away. Guess the law doesn’t apply to them. Since receiving my ticket for speeding I have kept an eagle eye on my speedometer. Imagine my surprise when I was in the middle of a convoy of vehicles going the 15 mph speed limit when I saw a couple of traffic officers passing the whole line of vehicles, not on their way to anyplace special, but just because they didn’t like following traffic going that slow and they knew they didn’t have to. Guess the law doesn’t apply to them. Or how about the traffic officer (nice lady) who picks up her child at school and brings her child home on her motorcycle without the child wearing a helmet? And how about starting to park ALL town board (the peoples) vehicles at the close of the business day unless used for town council business as the law states. These are just a few examples. Maybe the citizens should be given their own ticket books so they can force the enforcers of our traffic laws to follow the traffic laws they enforce.

As I said, I am all for cracking down on the excessive speeding on the island. But those in authority are supposed to lead by example. The only thing their example can lead us to believe is that once you’re in authority, the rules no longer apply to you!

/s/ practice what you preach
(name withheld by request)

The island’s sixth blood drive of the year nets 21 pints!