Following several reports of illegal dredging within the Hol Chan Marine Reserve near the Secret Beach area of Ambergris Caye, the Mining Unit in the Ministry of Natural Resources has launched an investigation to deter the unauthorized activity. The dredging consists of artisanal and small-scale dredging and is allegedly being done by several property owners, who are taking the sand from the seabed via boats to use as landfill. However, dredging can only be approved by the Mining Unit, and even though The San Pedro Town Council (SPTC) has been granting permission, they have no authority to grant dredging permits. 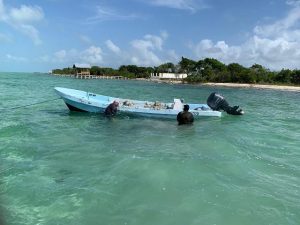 The reported activity is taking place within the expanded zone of the Hol Chan Marine Reserve and has become a concern for fisheries enforcement. Hol Chan’s patrol officers were the first to spot persons digging underwater, and others using dredging machines. When the patrol officers attempted to stop the activity, they were told that the SPTC granted them permission on a temporary basis. The permits are contrary to what is stated under the Mines and Minerals Act, whereby it is the Mining Unit responsible for the issuance of dredging permits. 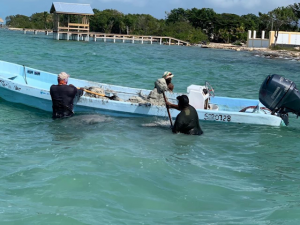 A permission letter from the SPTC was provided by a property owner to the media. The letter authorized the digging of about 50 feet around his pier for better access. The San Pedro Sun visited with Mayor Guerrero, who stated that such type of dredging is traditional on the island and has been happening for decades. “The problem now is that that area has become a marine reserve,” said Guerrero. “All of that coastline is very low and that is how people fill up their properties, I am not stopping it, especially traditional dredging,” Guerrero added that before Hol Chan was expanded to the western side of Ambergris Caye, there was an agreement to allow the continuation of traditional dredging. “I will not give permission for massive dredging, I know better than that, but the traditional, they can take me to court if they want,” Guerrero said. He stated that they will be having a meeting with Hol Chan in the following days to discuss the issue with these small scale and artisanal dredging. 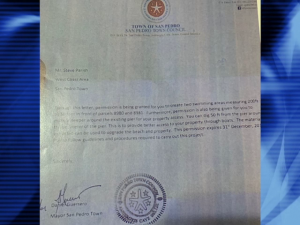 The San Pedro Sun reached out to the Hol Chan Marine Reserve, but no one was available to comment on the matter. However, a cease and desist order was issued to some people who were dredging in November 2019 by the Mining Unit stating, ‘You and/or your agents are hereby advised that if extraction is currently taking place outside of a valid mineral right adjacent to parcels 8980 and 8981; to cease all extractive activities until these extractions are normalized through the settlement of fines and subsequent issuance of a Mineral Right. Likewise you and/or your agents are hereby instructed to contact this office no later than November 20, 2019 to start the process or normalization.’ 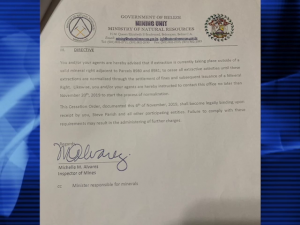 The Cessation Order was to come in to effect upon receipt and failure to comply with it would result in the further administering of charges.
The Mining Unit was contacted for a follow up on this Cessation Order, but they briefly stated that an investigation was taking place and could not further comment on the issue.
The reserve was established in 1987, and covers around 4,448 acres and includes coral reef, seagrass beds, and mangroves forest. It spans from the south-east to the north-west side of the island near Secret Beach, where in November 2019 motorized watercraft and recreational equipment of that nature were banned. These regulations were put in place to prevent the disturbance of natural habitats for species like Bone Fish and Permit, which supports the multi-million-dollar fly fishing industry.