Cayo farmers have been offered a sweet deal from the Santander Group, to get into the lucrative sugar industry without any initial investment by the farmers. Santander’s Chief Executive Officer (CEO) Jose Rodriguez says they can enjoy a secure income growing sugarcane while also increasing Belize’s exports and helping the country become self-sufficient in green, clean energy production.
The Santander management team, CEO Jose Rodriguez, his brother, and Chief Financial Officer (CFO) David Rodriguez, Agricultural Manager Enrique Sanchez, and Public Relations Manager Beverly Burke made their pitch to the farmers at a press conference at the Best Western Biltmore Plaza Hotel on Tuesday, February 25th.
No start-up capital? No problem, says CEO Jose Rodriguez, emphasizing that all the farmers need, is to have their lands cleared and prepared for farming. The company’s engineers will do the rest. The company will send in its heavy equipment, guided by high tech, state-of-the-art laser systems, to level the land for correct drainage. The company will do all the heavy lifting at the start, as their machinery will also do the planting and harvesting.
No need for the prospective cane farmer to hire cane cutters or to buy cane seed. The company will completely finance the initial cost of getting the farmer established as a sugar cane grower. The company would collect on the back end to recoup their investment when the farmer brings in his first harvest, with the company’s help.
When it comes to harvest time, the farmers will no longer need to hire cane cutters or a truck to deliver the cane to the factory. The company is 100% mechanized in its field operations, and it will send in its harvester combine to cut the cane and load it on to trucks, which will deliver the cane to the mill. This improves efficiency, reduces sugar losses from deterioration, as there is no long waiting in cane truck lines as was the norm in the north. Almost immediate delivery to the factory cuts the “kill-to-mill” time to a couple of hours.

CEO Rodriguez explained that since sugar cane is ratooned (a method of propagation in which subterranean buds on the part of cane left underground after harvesting give rise to a new crop stand), the farmer would be rolling in the money, as he could continue to harvest cane for the next five-six years, without replanting and the farmer would enjoy the profits once he has repaid Santander’s initial planting cost.
Construction of the Santander sugar mill began near Valley of Peace, Cayo district, in 2014, and the factory was commissioned in February 2016, with the first harvest of “zaffra” beginning in March 2016. The physical plant is about the same size as the ASR/BSI’s sugar factory at Tower Hill, Orange Walk. The plant was originally projected to mill 800,000 tonnes of cane per year, but cane production has not yet met this target.
Santander is encouraging Cayo farmers to get in on this sweet deal, as the factory ground 477,000 tonnes of cane in 2019, producing 44,000 tonnes of sugar, and they plan to produce 57,248 tonnes of sugar from 600,989 tonnes of cane ground this year. The yield or Tonnes Cane to make a Tonne of Sugar (TCTS) of 10.84 last year and 10.49 expected this year is not so good as ASR/BSI’s TCTS of 9.145 in 2019. Some of that cane from Corozal is so sweet; the TCTS cane is as low as 8.0.
Santander’s mechanized, computer-controlled methods of planting, cultivation, irrigation and fertilizing have been achieving far better yields per acre of sugar cane than in Orange Walk and Corozal. They produced 71 metric tonnes of cane per hectare in 2019 – or 28.73 tonnes per acre. This year they expect to produce 70 tonnes cane per hectare or 28.3 tonnes per acre. The Corozal and Orange Walk farmers’ traditional production of 16 – 17 tonnes per acre pales in comparison. 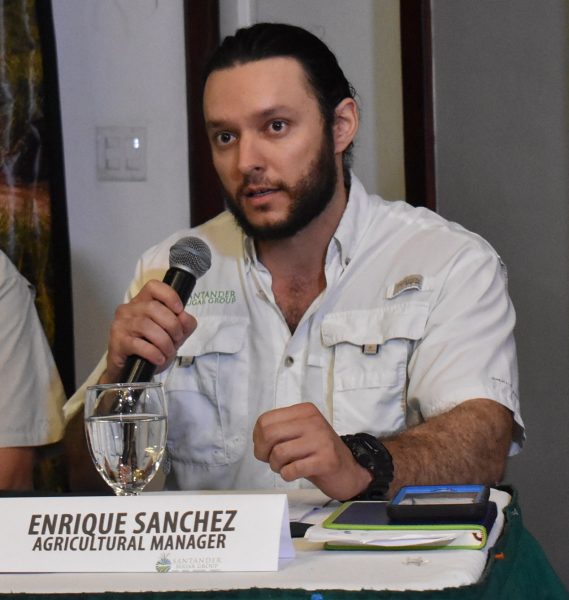