Home » Community and Society » Update on the Situation with Wildfires: Air tankers funded by PACT deployed

Update on the Situation with Wildfires: Air tankers funded by PACT deployed


The air tankers funded by the Protected Areas Conservation Trust ( PACT ) continued flights over the western communities in the Cayo District on April 30th, from 5:00 a.m. up to around 5:00 p.m. Several fires were suppressed in the areas of El Pilar and Chapel Hill in Benque Viejo del Carmen, and in the villages of Georgeville, Barton Creek and Unitedville. A house was saved from flames south of Unitedville and a large fire was extinguished in the Riverwalk area, among many other fires suppressed today. Around 5:00 p.m., a large thunderstorm rolled over the western part of the Cayo District, drenching all the fires in the Vaca Forest Reserve, Arenal, and Blackman Eddy. With the rains this evening, the far west is considered to be significantly out of harm’s way.

In Belmopan, the air had cleared after the air tankers drenched the fires on the eastern periphery on April 29th. However, at around 2:00 p.m. today, two fires were lit by what is suspected arson in the vicinity of the Palm View Psychiatric Clinic in Maya Mopan and on the forested property of the University of Belize in southeast Belmopan. Residents reported that a red late model Toyota Rav4 was seen entering and exiting the university property shortly before several small fires began burning along the road that dissects the property. The Department of the Environment (DOE) along with the police combed the area of the fires on the property but did not observe anyone in the area by that time. Due to those two fires, the conditions in Belmopan have degraded and the air is now thick with smoke.

The residents of Maya Mopan and the UB forested property are implored to keep a watchful eye. Take photographs of any suspicious activity in the area, especially during the afternoon hours when the fires are typically lit, and immediately report to the DOE or the Forest Department. The DOE and the police will be frequenting the area.

The Ministry once again thanks the board of directors of PACT for their generous show of corporate social responsibility. 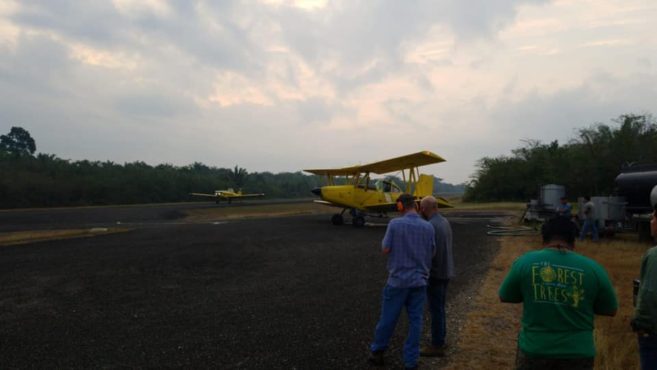 Since mid-April, the country has been plagued by large agricultural fires started by humans, causing smoke levels that have led to poor air quality conditions for residents in nearby communities. The situation is now being exacerbated by wildfires (forest fires) due to environmental conditions such as extremely low humidity, high temperature and wind.

As these fires continue to expand, the local smoke levels have become a health threat/hazard, affecting many citizens especially in the Cayo district and are now threatening to claim physical structures in the peripheries of residential areas.

The largest wildfire has been observed in the Vaca Forest Reserve region of Belize.

The firefighting efforts have been led by the Government of Belize through the Ministry of Environment and its agencies and departments including the Forest Department and the Department of Environment in partnership with the Belize National Fire Service, Village and Town Councils and impromptu community brigades. However, these traditional response efforts are only being moderately successful against the current, unprecedented wildfire and smoke situation being fed by the hotter and drier weather conditions.

#PACT is assisting the response effort, by enlisting Airmax Limited to provide aerial water bombing services to complement the ground efforts. The air tanker can hold and deploy up to 500 gallons of water and given the small size of the aircraft, can be reloaded quickly. The exercise commenced this morning in the City of Belmopan where 35 flights have since occurred and is being effective at controlling the spread of the fires and suppressing smoke. As a result, the service is being expanded to the Vaca region and municipalities of Benque Viejo and San Ignacio starting around 3:00 p.m. today with the same objective of bringing these fires under control and providing residents with much needed relief.

While PACT annually supports fire management programs for protected areas, as it is an important management aspect to ensure forest and biodiversity conservation, the current record-breaking wildfire situation comes at a time where the COVID-19 pandemic has put particular strain on emergency resources – intensifying pressure on already limited firefighting resources and funding. Despite these financial constraints, PACT determined the need to increase its individual contribution to preserve biodiversity and human health and has committed BZ$100,000.00 of its funds for the aerial water bombing services to assist the country’s response to the worst wildfires in Belize’s history.

PACT joins the Ministry of Environment in thanking all agencies, businesses, and communities that have and continue to assist with fire management efforts countrywide; and encourages everyone to contribute to fire prevention by reducing fire prone activities.

If other agencies, organizations or persons would like to contribute to supporting the wildfire response, please contact PACT at [email protected]