On Tuesday, April 28th, the San Pedro Fire Department (SPFD) responded to a bushfire, which was threatening to get out of control and edging to nearby structures in northern Ambergris Caye. The fire posed a challenge to residents in the area, who joined in the efforts with the firefighters to control the blaze.

(Above images taken from a live video)

The SPFD stated that the bushfire was major to an extent, given its location far up north. The cause of the fire has not been determined, but islanders living in those areas are advised to keep their surroundings clean and cleared from bushy areas. One of the challenges with this fire was accessibility to the spot and according to a representative from the fire station, it could have been worse if there actually had been no access to the area. In the event that there is a wildfire in such areas, residents are asked to make fire paths around their properties to prevent any tragedies.

There is currently a heatwave across the country, making conditions dry and windy. The mainland has seen its share of large bushfires that have already caused large economic losses. 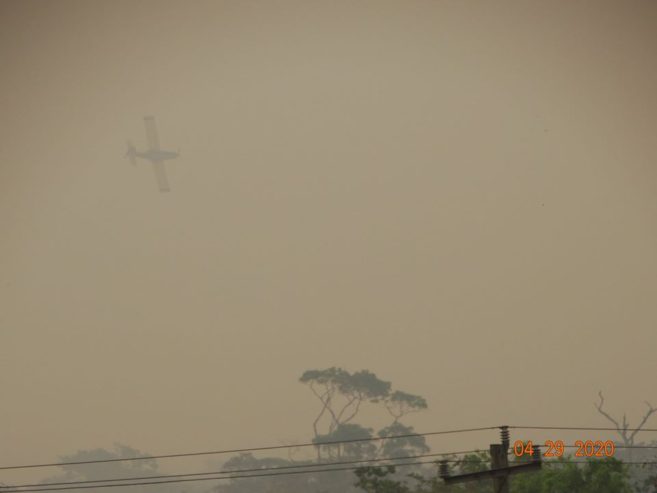 Some areas heavily affected include the surrounding areas of the Capital City of Belmopan, where until Sunday, April 26th, two wildfires were brought under control after causing high alarm and threatening nearby communities.

That same day, another wildfire in the Vaca Forest Reserve in the Cayo District was tackled by volunteers and firefighters before it could spread further. The fire was reportedly burning on multiple fronts and was responsible for much of the smoke over the towns of Benque Viejo del Carmen, San Ignacio and Santa Elena. (Above photos by Jungle Splash Eco-Tours)

The fires, considered agricultural, are believed to have spread due to the dry conditions, winds, and soaring temperatures of over 100 Fahrenheit. In order to prevent any potential wildfires, legislation was passed to penalize those caught setting fires in the wild, regardless if they are for agricultural purposes.