The public is hereby advised on the situation with wildfires across the country and updated on the work being done by the Government of Belize. The Forest Department, the Department of the Environment (DOE) and other agencies including the Fire Department, the Belmopan City Council, the San Ignacio Town Council, and ranger volunteers such as the Southern Wildfire Group, continue to collaborate to actively address the ongoing fires.

Over the Easter weekend, very high daytime temperatures were recorded. Temperatures approached and eventually exceeded 100 degrees Fahrenheit. The satellite-based fire detection system Fire Information for Resource Management System (FIRMS) recorded close to 80 fires per day, which quickly rose to over 117 fires in the week following Easter. Analysis of the location of these fires showed that they were all related to agricultural landscapes, either sugar cane, milpas, mechanized agricultural fields, or fresh land being cleared and burned for farming.

On April 15th, new legislation began to be drafted to prohibit the open burning of any vegetative matter to reduce the risk of wildfires and further smoke pollution during the state of emergency. During that same week, the public was also advised daily via afternoon and evening newscasts about the need to halt all open burning. 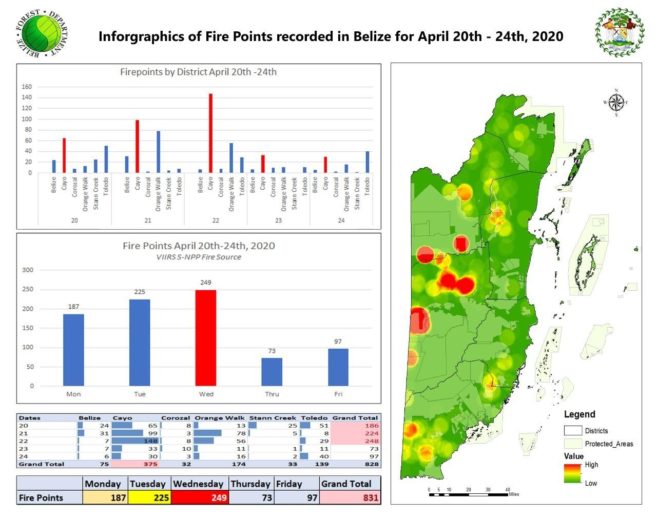 The DOE began its enforcement campaign on April 18th and visited the Santander sugar cane fields and instructed that all fires be extinguished. Santander immediately complied. The field campaign was expanded, and the DOE visited Spanish Lookout and surrounding areas to inform farmers of the upcoming legislation. The Forest Department also visited farmers in the Vaca area along the Arenal Road and along the George Price Highway between Belmopan and San Ignacio to inform village chairpersons and farmers of the upcoming legislation. Both departments reported that most farmers complied and immediately began outing fires.

On April 21st, the new legislation, known as the Environmental Protection (Prohibition of the Open-Burning of Refuse and Other Matter) Regulations, came into effect via Statutory Instrument No. 59 of 2020. The Forest Department and the DOE continued their enforcement campaign and visited several other communities in the Cayo District. Many farmers complied with the new law and began outing fires they had previously started.

By April 23rd, a 77% reduction in agricultural fires was observed on the satellite-based system as shown by the graph below. As farmers extinguished fires and retreated from the areas, the Forest Department began aggressively monitoring the situation. In addition, the monitoring of urban yard fires continued. No persons in the Belmopan and San Ignacio areas were encountered engaging in open burning in their yards during this time. Residents countrywide are encouraged to be mindful and respectful of the situation.

On April 24th, the daytime temperature approached 107 degrees Fahrenheit, and the Forest Department reported that several of the fires that were previously extinguished began flaring up, creating new fires and producing much smoke that settled on the municipalities of Belmopan, San Ignacio, and Benque Viejo del Carmen during the evening. In addition, escaped agricultural fires began spreading into the hills of the Vaca Forest Reserve and created a mounting emergency.

April 25th, the daytime temperatures again approached 107 degrees Fahrenheit, and new fires began flaring up in bushes surrounding Belmopan, Benque Viejo del Carmen, and San Ignacio. These fires are no longer agricultural fires but are now wildfires burning in the forests and bushes surrounding these municipalities. Almost all these wildfires are burning on private estates, except for the Vaca fire which is inside a forest reserve. Given the high sustained daytime temperatures, the now wild uncontrolled nature of these fires, the absence of major rain in the forecast, and the state of emergency that is in effect, the Ministry is advising that the fire situation in the Cayo District is rapidly approaching the level of an emergency. 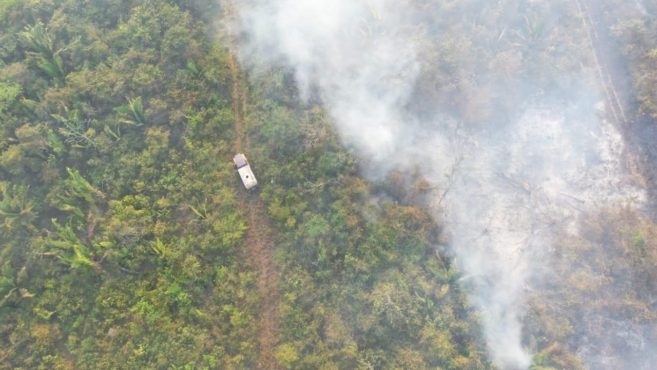 The Forest Department completed several ground reconnaissance missions in the Cayo District today and began outing fires in the J&W Estate area and in the Riviera Area of Belmopan with support from the Belmopan City Council, the Fire Department, and local businesses. Another Forest Department team began addressing fires in the west around San Ignacio and Benque Viejo del Carmen. Firefighting equipment from the Mountain Pine Ridge has been mobilized to address the wildfires in the Vaca Forest Reserve, including heavy equipment consisting of bulldozers and water trucks.

Tomorrow, April 26th, the Forest Department firefighting crew will enter the Vaca Forest Reserve to contain the wildfire there from spreading further into the forest and further into the Chiquibul National Park. This fire in the Vaca Area has the potential to release an enormous amount of smoke into the municipalities of Benque Viejo del Carmen and San Ignacio and has been determined by the fire teams to be a top priority. Based on tomorrow’s report, it will be decided whether to declare the Vaca fire an emergency.

The Ministry will also be coordinating efforts among entities such as the Friends for Conservation and Development, the Southern Wildfire Group, and the municipal councils to monitor and tackle the fire situation as best as possible.

The Ministry will be providing frequent updates through press releases over the coming days to keep the public informed. The public is reminded that in the absence of information reaching each and every person, there is still much happening and much work being carried out by the Forest Department and other national and local stakeholders to monitor and fight the fires affecting our communities. The understanding of the public during this state of emergency is again requested, and all persons are reminded of the new law which prohibits the starting of any fires. This will remain in effect until further notice.