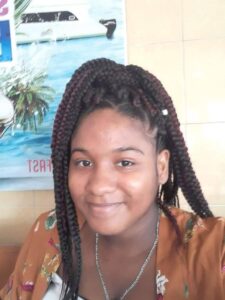 Police in San Pedro Town continues their investigation into the death of 20-year-old Abrie Tuyul. Tuyul was eight months pregnant and found motionless on the bathroom floor of her home on Friday evening, October 22nd, in the San Pedrito subdivision. Police suspect foul play, and since then, her common-law husband has been detained. The results of a post-mortem to determine the cause of Tuyul’s death are expected to shed more light on this latest death on the island.

According to an official report, Tuyul was at home with her two-year-old child and common-law husband. Neighbors claim they heard an argument between her and the common-law husband. After some time, reports indicate that the young child was seen sitting at a window from around 3PM, and it was some time after 5PM that the common-law husband came out of their apartment asked one of the neighbors for money to buy a smoke. The police report says that at that time, he did not mention anything about the whereabouts of his common-law wife until a few minutes later when he said that Tuyul apparently hurt herself.

Police say they are investigating this death from different angles and believe that due to the nature of the incident, they are ruling out suicide. The police did not offer detail of any injuries observed on Tuyul’s body. However, if the investigation reveals that the common-law husband lied, they will treat the case as murder. Police added that the couple used to argue regularly, and they believe that on Friday, it climaxed, perhaps ending with the life of the young expecting mother.

Tuyul’s partner remains in custody, and police are awaiting the results of a post-mortem to move forward in this sensitive case. They say this incident is being looked at very carefully and will act based on the facts gathered from the ongoing investigation.

More on Community and Society
BEL Statement on the CFE Supply of Electricity
Come one, come all!! Under-19 Championship Game