The Lions Club of San Pedro Town has presented well-known San Pedrana and Lion member Elvia Staines with the prestigious Melvin Jones Fellow/Award. The award is named after Melvin Jones, founder of the international organization, recognizes outstanding individuals and embodies humanitarian ideas consistent with the nature and purpose of Lionism. 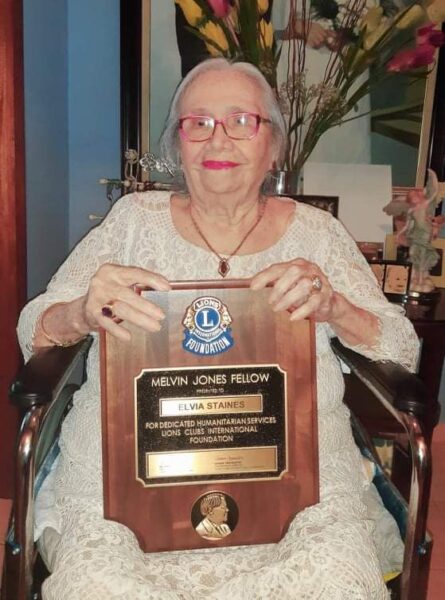 The members of the island’s club found Staines deserving of such recognition. Lion Staines, who also owns Elvi’s Kitchen, one of the iconic restaurants in San Pedro, has been a member for over 25 years. She was very active in the club’s different activities, meetings, and projects. According to the club, Staines has participated in my local and international Lions conventions. The awardee has always supported the community greatly through her business up to this day.

The Melvin Jones award is the backbone of the international foundation. It is presented to those who donate US$1,000 to the Lions Clubs International foundation or to people for whom others have donated in their behalf. According to Lion Marina Kay, San Pedro’s Lions Club donated under her presidency US$1,000 and voted to give the award to fellow Staines. It is a way to show appreciation for the years of service she has given as a Lion member.

Lion Staines has been recognized in the past with other prestigious awards. In May 2009, during the ninth Annual Belize Tourism Board awards, Staines was honored with the Lifetime Achievement award. Staines has been considered a tourism icon on the island, putting years of dedication, hard work, and contribution to tourism growth. In December 2016, she was once again lauded and recognized for her achievements during the 40th anniversary of Elvi’s Kitchen.