The Government of Belize, Re:wild and The Nature Conservancy (TNC) have agreed to co-operate in the implementation of a strategy and mutual undertaking of the parties for the benefit of the Government and People of Belize, to protect and conserve their natural ecosystems and its services, as well as its biodiversity in perpetuity while seeking to support sustainable human development.
Recognizing the economic crisis that Belize has been facing from combined climate and pandemic impacts, by way of supplemental agreements that amend the terms of agreements signed by the Government in October of last year, the Government of Belize, Re:wild and The Nature Conservancy have now agreed to a new model for conservation by providing guidelines for how protected land will be taxed and outlines how proceeds from the sale of carbon credits will be distributed. Such enhancements will now mean an additional BZ$20 million in land taxes to the Government over 50 years and the Government having the exclusive right to determine the use and disposition of a portion of the proceeds of sale of the carbon credits associated with the conservation lands that may mean millions of additional dollars to benefit the people of Belize. TNC has further committed to work with the Government of Belize to secure investments of approximately BZ$20 million over 10 years in order to improve regenerative agriculture and climate resilient land management in the region of the Belize Maya Forest. 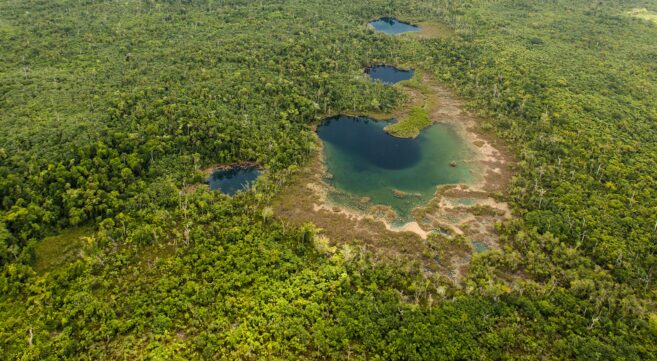 Photo courtesy of The Nature Conservancy

The supplemental agreements were approved in Cabinet and is a critical stepping-stone in conserving the Belize Maya Forest – 236,000 acres of land purchased through a collaboration of several partner organizations led by TNC that represents an irreplaceable linchpin in the conservation of one of the largest remaining tropical forests in the Americas.
In addition, the Maya Forest Corridor Initiative – a partnership led by Re:wild with the support of a coalition of local and international partners, is aiming to also protect the Maya Forest Corridor which is a critical link in Central America’s largest forest—the majestic Maya Forest—and a vital wildlife pathway.
This vital tract of land connects the Maya Mountains in the South and the Selva Maya of Guatemala, Mexico, and Belize and is a gateway that ensures the survival of many wildlife species. Since 2011, the Maya Forest Corridor has faced deforestation rates almost four times the national average, primarily as the result of large-scale agriculture. The protection of the corridor is also an investment in Belize’s immediate and long-term economic growth, as it will create jobs in forest restoration, protection, and management; and has the potential to unlock international climate financing. Together, these two conservation projects are a significant addition to Belize’s globally recognized, protected areas network, with the lands being held in trust for the benefit of the Government and People of Belize.
“The Government welcomes the conservation initiatives of The Nature Conservancy and Re:wild and their willingness to constructively participate in Government’s effort to strike a balance between the protection of biodiversity and sustainable human development,” said Prime Minister Honourable John Briceno.
“With the full support of the Government of Belize, these conservation efforts are a tremendous step forward in protecting a globally important wildlife habitat with rich biodiversity, that can also play an important role in mitigating climate change,” said Julie Robinson, Director for TNC in Belize. “With over 60% forest cover, Belize is one of the world leaders in conserving forests,” noted Chris Jordan, Re:wild Latin America Director. “Their willingness to work with conservation organizations to enable large-scale conservation projects such as these indicates that they remain forward-thinking and truly invested in a development model that recognizes the importance of forests for the national economy.”
The Government of Belize, Re:wild and The Nature Conservancy are mutually committed to the promotion of the long-term conservation, management, and protection of the natural resources of Belize for the benefit of people, nature and climate.