The Turley home, located in the San Pablo Sub-division, south of San Pedro Town, was the target of a shooting on the early hours of Sunday, December 9th. Although no one was hurt, a member of the family told The San Pedro Sun that as many as ten gunshots were fired towards their home, with at least six of them hitting windows and other parts of the house. After the incident, the family claims to have received death threats from unknown persons, and have reported these to the authorities. As of press time, no official report on the shooting has been made available by the police department. 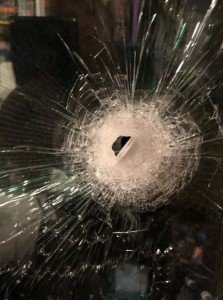 According to information provided by family members, the incident took place around 1:30AM, when several explosions were heard coming from outside the residence. They later noticed the bullet perforations on the walls and window glass and called the police. Police inspected the visible gunshots, looking for more damages to the structure. Witnesses have stated that immediately after the shooting, a dark-skinned man was observed running from the area in a southbound direction. 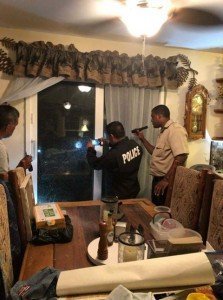 The Turley family believes that the attack might be linked to an incident that occurred on September 9th when a suspected arson destroyed a Honda motorcycle belonging to 21-year-old Trent Turley. A golf cart parked nearby also sustained minor damages in the blaze. The motive is believed to be an ongoing dispute, including a court case, which the Turley family won sometime in November. They believe this attack is some type of retaliation.
The situation seems to be escalating, as the Turleys claim that they have received death threats and extortion via emails and social media. According to Turley, the threats are demanding for an amount of $550,000 US dollars and if no payment is made things will be resolved the ‘Belize’ way. He claims that the threats towards him on social media include messages for him to get a coffin.
The family is fearful for their lives and urge the police to find the responsible persons behind these attacks. They hope for a quick solution and a stop to these acts of violence that are affecting their lives and property.
The San Pedro Sun attempted to get an official statement from police, but to no avail.

Photos:Local Police and Fire Department are ready for the Christmas Season