« Older: No island Government School for the new school year starting in September 2016
Newer: » 2016 PSE Results are in; SPRCS tops the island


The weekend of Saturday, June 11th and Sunday, June 12th was a celebration of two secondary institutions’ graduation ceremonies on La Isla Bonita. The San Pedro High School held its 45th Graduation Commencement Exercise on Saturday, June 11th at the Angel Nuñez Auditorium starting at 5PM when 96 students marched in to the tune of Pomp and Circumstance.

Tanairi Arana and Jonathan Andino were the Mistress and Master of Ceremonies. After the graduates sang their school song, Elladira Garcia delivered the salutatory address. Principal Emil Vasquez and Chairman Aljemiro Paz Jr. distributed diplomas to the Class of 2016, after which outstanding students were awarded. Jonathan Andino was voted Senior of the Year, Louis Valdez won Best Athlete, and Bruce Garbutt was awarded Student of the Year. 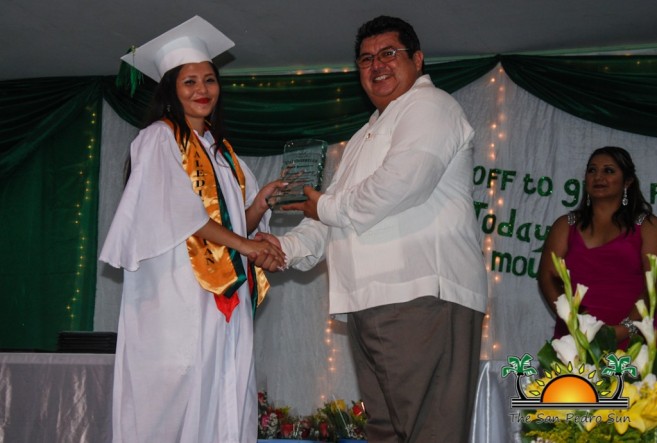 Giselle Flores served as the guest speaker for the graduation, and her heartfelt speech encouraged the students to value, and make use of their education. The ceremony continued with the valedictory address given by Virginia Vasquez, who based her speech on Nelson Mandela’s popular quote: ‘May your choices reflect your hopes, not your fears’. “Education is everywhere, so I urge all of my fellow graduates to never stop learning. Do the best you can until you know better, and when you know better, do better. I hope we all could become fearless,” said Vasquez. 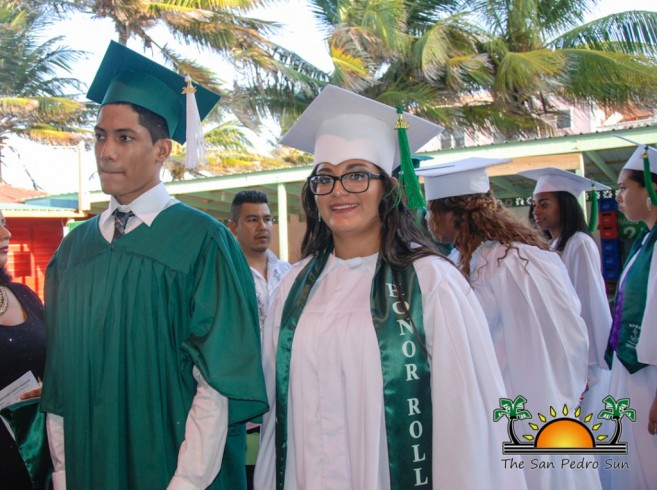 The traditional rose ceremony was led by Jasmin Marin and Marissa Gonzalez, while the candle light ceremony was led by Rosely Carillo and Kristy Arnott. Vasquez gave his principal’s address, proudly mentioning that the Class of 2016 made history. For the first time, SPHS had the highest number of graduates to date, more than 50% of the students were on Honor Roll, and after adapting the Grade Point Average system, Valedictorian Vasquez was the first to receive a perfect average of a 4.0. The ceremony ended with the Vote of Thanks given by Delmi Garcia.

On Sunday morning, June 12th, the San Pedro Adult Continuing Education (SPACE) held its 4th Commencement Exercise at the Angel Nuñez Auditorium. SPACE is the high school night division managed by the San Pedro Junior College and has been in operation for four years. A total of eight students graduated as the Class of 2016.
Master of Ceremonies Alex Nuñez led the ceremony as family and friends joined the graduates in their special moment. Miguel Coc delivered the salutatory address, followed by an inspiring lecture given by international guest speaker, John G. Kennedy. Afterwards, Jose Milo Paz Jr., along with his wife Mini, distributed well-earned diplomas to the graduates. Nancy Paola Navarrijo gave her valedictory address, and after, the graduating class sang the rendition of “Breakaway” by Kelly Clarkson. To close off the ceremony, the Vote of Thanks was given by Geovanni Guerra.