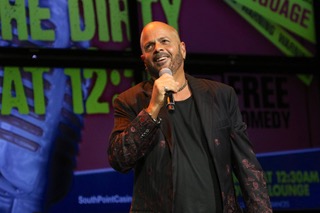 The restaurant’s first professional stand up comedy show starring headliner Rob Sherwood takes place Wednesday, February 21 at 8:00 p.m. Sherwood is the opening act for mega prop comic Carrot Top in has Las Vegas showroom at The Luxor, and he has headlined comedy club across the US and abroad. Tickets can be purchased online via Iguana Juan’s Facebook page or at the restaurant during opening hours.
Other unique events coming soon include Saturday morning reggae brunches with local musicians and interactive tamale making classes.
Brad and Shannon Reeder bring years of comedy club and restaurant experience to Iguana Juan’s. Brad is a professional comedian who has opened for Jay Leno and Jerry Seinfeld, and he has been seen on TV’s Comedy Central, Evening at the Improv and Last Comic Standing. The Reeder’s owned one of the top 10 comedy clubs in the US as ranked by USA Today, along with two restaurants, in their hometown of Raleigh, NC. After selling their business in the US in 2013, they began to explore Belize, first living in Hopkins, before making the move to San Pedro in 2015.
Iguana Juan’s menu blends American and Central American favorites, with an emphasis on fresh and house made ingredients. Specialties include burgers, tamales, ceviche, creative salads, sandwiches, vegetarian dishes and more. Opening hours are 11 a.m.- 10 p.m. Tuesday through Sunday.

Another Shade of Blue films on AC