Placencia village is known as a tourism destination but back in the 50’s and up to the early 90’s, it was known as a thriving fishing community. In fact, fishing became the main revenue for the area so much so that in 1962 fishermen from the area formed the Placencia Producers Cooperative Society Limited (PPCSL). In the mid 80’s the PPCSL grew to over 100 members. Also growing at the time was the local and international demand for fishery products and by the mid 80’s fishing yielded 50,000 pounds of whole fish, 75,000 pounds of conch and 40,000 pounds of lobster tail per year. With unregulated extraction of fishery products, along with the demands of a growing tourism community, production began to decline. In an effort to diversify, in 2005 the community fishermen began exploring the possibility of seaweed (Euchuma isoforme and Gracelaria spp) production.

But how exactly does the seaweed farming operate? According to PPCSL Chairman Sydney Lopez Jr., the seaweed farming project is a module adopted from another Caribbean country that is doing a similar project with seaweed taken from the wild in Belize. “Some people from Saint Lucia came to Belize in the mid-2000’s and took live seaweed from Belize to work on a pilot project and now they have a market and industry from it. They came back to Belize in 2005 and showed us how they were doing it and we thought it would be a good idea to diversify. We saw a constant decline in the [supply of] traditional marine products [despite an increased demand] and so we saw the seaweed project as an opportunity to diversify.” After submitting a proposal in 2010 to the Community Management of Protected Areas Conservation Programme (COMPACT), the PPCSL was awarded an 18 month grant in the amount of $90,000 to start off the project. 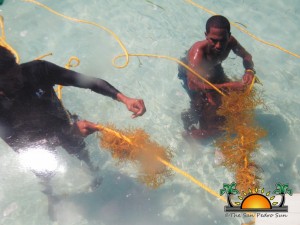 Once the grant was approved Lopez Jr. and PPCSL members, with the use of a Saint Lucia module, began their new venture. “We went over to Glovers Reef, where we got the natural seed stock because it is over there in abundance. We went over for two to three nights with a group of about 15 and took ropes where we planted seed stock on the ropes. Then we brought them to the Barrier Reef near Hatchet Caye where two farms are located. This is how the process is: we plant on the ropes by breaking off a piece from a big seaweed head patch and putting a little piece through the openings of the rope. Then we have the nets (previously acquired from the trawlers once owned by Oceana) and sew part of nets to put over the ropes. The nets protect the seaweed from rough weather so that it doesn’t break off when it grows big.” 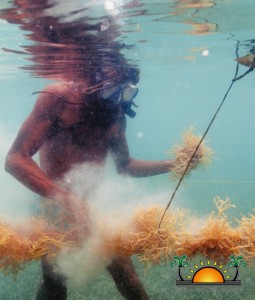 According to Lopez Jr. once the seeds are left to grow for three months, they should be ready to reap. After the first crop, each field can be harvested on a monthly basis and can yield up to 50 pounds of dry seaweed. “Once it is ready for harvest, we go into a different process. We clip it off the ropes and the small piece that remains will regenerate. Whatever we clip off we take to the island at Hatchet Caye for now and we dry it. Once it is left to dry for about three days we transport it and process at our facility at the cooperative.”

Currently at the Placencia coop’s facility, the seaweed is packed into bags or sold in a gel form to the local market. “At the cooperative facility, a group of women that we employ bags them in different sizes which we sell as dry product. We also sell in a gel form. The dry seaweed is soaked in water for an overnight and it melts forming a jelly and that is what people use for their shakes, smoothies and other forms of cooking. It can also be used in all different forms including cosmetics and soap and those are other avenues we are exploring. We have begun exploring making soap and we are selling it locally.” According to Lopez Jr. a US businessperson has already expressed interest in purchasing raw dry seaweed to produce a brand of soap made with a combination of Belizean local products, including cacao. 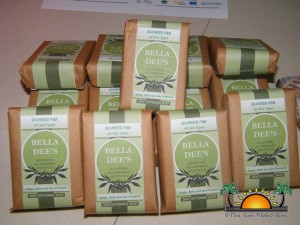 Currently the PPCSL only has seaweed for local demands but with the acquisition of Northern II, a bottom trawler once used to extract fishery products in Belize, they plan to move into their second phase which will eventually see them exporting their product. “We are going into our second phase and plan to expand so that we can begin to export. For the expansion project we plan to double our seaweed field and annually we plan to add 20 farms,” said Lopez Jr. The PPCSL are currently looking at exporting to the Asian market where the seaweed has a higher price and is consider a staple in their diet.

PPCSL estimates that with the new expansion there will be an increase in production of the seaweed, training opportunities and creation of new jobs in the areas of processing and packaging. Based on the market study provided by Belicana Consulting and Development Ltd (BCDL) a pound of seaweed is sold for roughly $30 in Belize. These products currently generate $510,800BZD [gross] annually to the economy. BCDL projects a potential market increase with active marketing from the PPCSL to $574,700BZD per annum. The PPCSL is also looking at other forms of sustainable fishing such as the processing and exportation of the invasive Lionfish flesh into the US market.