The cold cool beers flowed and a full buffet beckoned as the expansion of Hol Chan Marine Reserve was launched just days before a major election on February 25th. But even though Cabinet has approved the plan, The San Pedro Sun can confirm that the expansion has not been signed into law, one full month after it was launched in grand style. So what is the hold up and just how long will it take before it is legislated?

No one knows for sure how long it will take before it is turned into law. What is known at this time is that the document is before the Solicitor General’s Office, yet to be reviewed before it is returned to the Ministry of Fisheries, Forestry and Sustainable Development to then be signed into a Statutory Instrument (SI). During the official launch of the expansion, Fisheries Administrator Beverly Wade indicated that it was just a matter of days before the SI would be signed into law. 30 days after the launch, the document still sits before the Solicitor General’s Office. Before any document is signed into law, it must be reviewed by the Solicitor General’s office to ensure that it does not contravene any other law.
Hol Chan Marine Reserve Manager Miguel Alamilla explained that he cannot speak as to how long it will take before it is actually signed into an SI and gazetted. However, he did say that the staff at Hol Chan is already doing preliminary work such as placing markers in the new area.
At the official launching of the reserve, Area Representative Manuel Heredia Jr. was one of the speakers, and in which he indicated that some adjustments were made to the coordinates of the expansion. One of those changes that were made was to exclude a portion of the wetland area. The portion that was excluded from the reserve was part of the wetlands that came under public scrutiny when it was parceled out for a subdivision. Although the proposed subdivision has been relocated the land was excluded from the reserve. Alamilla confirmed that the “government and some local stakeholders’ recommended that the border of the subdivision be moved to exclude that area. The adjustment will see the reserve running almost parallel to the road that leads to Grand Belizean Estate subdivision. 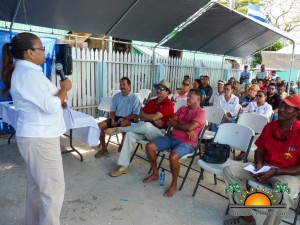 Another notable adjustment was that while the polygon of the expansion shows the inclusion of a mass area, Alamilla indicated that a clause in the official documents exclude private land from being treated as part of the reserve. Those lands include a significant amount of private land, a portion of the Social Security Board land and some of BELTRAIDE’s properties. In fact, there was a special request made by BELTRAIDE to be excluded from the polygon, with over 1000 acres of their property intended for future development.
As part of the adjustment, the demarcation of the reserve was moved approximately one kilometer from the main coastal areas. That was done to allow fishermen, especially from Bomba Village in the Belize District, the opportunity to continue using the coastal waters as traditional fishing grounds. In addition, dredging will also be allowed in the general use area of Zone E. Dredging will not be allowed in E-I to E-VI areas. Dredging is subject to the approval of permits and other related documents by the authorized government agencies and will be supervised by Hol Chan Marine Reserve staff. ‘When establishing protected areas, you have to make some compromises,” said Alamilla.
Alamilla explained that the establishment of the expansion of the reserve was a “complex process,” that changed on several occasions. He said that until all the legislation is in place, following the signing of the SI, the area is still not considered a reserve.
The San Pedro Sun attempted multiple times to get a comment or an update from Administrator Wade, but all attempts were futile.