The Hol Chan Marine Reserve located between Caye Caulker and San Pedro Town has increased in size following the launching of the expansion of the reserve. The inaugural event took place on Wednesday February 25th at the Hol Chan Marine Reserve office on Caribeña Street in San Pedro Town before a cross-sector of stakeholders. On hand for the official launching of the expansion were Belize Fisheries Department Administrator Beverly Wade; Minister of Tourism, Culture and Civil Aviation, Honorable Manuel Heredia Jr. and the incumbent Mayor of San Pedro Town, Daniel Guerrero.

Hol Chan Marine Reserve was officially declared a reserve in 1987, and at the time included 18.1 square kilometers. In 2008, the reserve was expanded to include seabed, mangrove hatchery areas and grew in size up to 55.4 square kilometers. After five years of work, the marine reserve has expanded with the addition of 359 square kilometers of reef, sea, shoals, lagoon and wetlands added to the reserve. In his remarks, Hol Chan Marine Reserve Manager, Miguel Alamilla told the gathering, comprising of tourism and fisheries stakeholders, that the project was the brain child of San Pedro Tourist Guides Association, the Ambergris Caye Citizens for Sustainable Development, the Ambergris Caye Wetlands Committee and the Hol Chan Marine Reserve. “Through an integrated approach and with the full participation of the government agencies and stakeholders, we are happy that we accomplished what we started a few years ago,” said Alamilla.

The expansion will include four additional areas. The largest of the four areas is Zone E referred to as the Bajos General Area. It will also be the largest of all eight zones that will now form a part of Hol Chan and accounts for a total of 330.6 square kilometers. Zone E has been further subdivided into I – Bajos General Use Zone, II – Cayo Pajaro Conservation Zone , III- Bajos Conservation Zone, IV – Cayo Rosario Conservation Zone, V – Blackadore Conservation Zone and VI – Los Salones Conservation. Zone E borders the current boundaries of Hol Chan to the south and then runs along the leeward coastland of Ambergris Caye up to Bacalar Chico Marine Reserve. To the west and north, it runs up to the mainland near the Bomba Village Lagoon entrance then northwards to the Corozal Bay Wildlife Sanctuary.
Zone F consist of Cayo Frances Conservation Zone which encompasses 13.5 miles of lagoon, cenotes and interconnected wetland area. It is located within the inner part of northern Ambergris Caye starting from the Grand Belizean Estate Road heading northwards along private resorts ending by the Social Security Board property. The area serves as a hatchery and home for thousands of juvenile reef fish and is also used for sport-fishing. 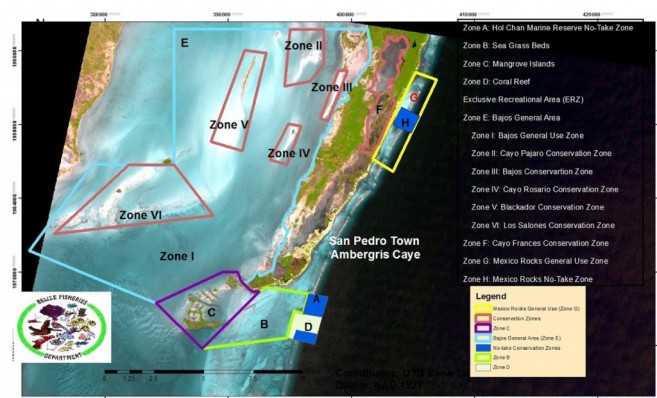 Zone G is considered the Mexico Rocks General Use Zone, comprising of 15 square kilometers. It takes into consideration seabed, reef and part of the sea. Within this zone is the smallest addition – Zone H – consisting of Mexico Rocks’ No-Take Zone. It is approximately one square kilometer in size. Only recreational activities will be allowed in the area, and no extraction of any kind of marine resources (alive or dead) will be allowed.

Minister Heredia and Mayor Daniel Guerrero both took the opportunity to highlight that while securing the expansion of the reserve, there were many challenges that had to be overcome. The two said that amongst the difficulty faced was the re-acquisition of land, shoal and part of the sea that were sold to private owners under the previous People’s United Party government of 1998-2008. “Everybody in Cabinet came on board after a series of consultation. From the beginning, this administration has been very instrumental, ensuring that we do everything possible to conserve and preserve our natural resources,” said Heredia. He explained that for tourism, the expansion of the reserve will compliment what the island currently has to offer. “Any reserve that you create in the Number 1 tourism destination will definitely enhance the visiting experience of our tourists. I can guarantee you that once it is internationally know that the reserve has been expanded, then we will see more tourism coming to the island.”

While conservation is one thing, it also has a financial side as far as the use of the area is concerned. The area considered in the expansion of the reserve has been used for years by the over 400 tour guides of Ambergris Caye who take tourists on various daily activities free of charge. With the area now a part of Hol Chan, guides will have to add on a park-fee to the visitors wishing to use the area. According to Wade, that concern was raised in the early stage of consultation. “This was very well consulted with the stakeholders in the industry, because we realize the crucial role they play. We got very good support from the tour guides on the island. Yes, there will be some glitches, but we have the commitment from them to comply by the regulation. They were part of the group that advocated for the area to be placed under a reserve,” said Wade.

From the management perspective, Wade told The San Pedro Sun that there will be the need to significantly increase the staff of Hol Chan Marine Reserve, as well the resources available to regulate the area. That by itself requires additional financial allocation. According to Wade, the initial cost of the first year of implementation stage will be done through a grant commitment made by the Protected Area Conservation Trust (PACT). “With this expansion, we have to look at the capacity to implement the expansion. That concern has been discussed by the board and we have the approval of a sizeable grant from PACT. We are also looking at integrating the fee collection and our revenue base will obviously expand and so that analysis has been made. That will allow us to hire more rangers to implement our program,” stated Wade. The grant commitment from PACT is the same $199,500 that was re-called from Hol Chan Marine Reserve last year when a deadline was not met for the approval of the reserve expansion.
Wade said that the expansion is an environmental boost for the regional efforts between Mexico and Belize. “This new addition to Hol Chan further strengthens our ecosystem management approach and enhances the sustainable use of our marine areas not only in northern Belize. As rightly pointed out it now forms a corridor of protected areas from Belize to Mexico which goes hand in hand with our regional efforts.”

With the new addition to Hol Chan Marine Reserve, it now encompasses 414.4 square kilometers and is one of the largest marine reserves in Belize. The regulation of the new addition of the reserve will start immediately after the Statutory Instrument (SI) is signed into law by the Minister of Forestry, Fisheries and Sustainable Development, Lisel Alamilla. It is expected that the SI will be signed by Friday, February 27th.