Since the beginning of turtle nesting season, Hol Chan Marine Reserve has scouted and discovered a total of 55 incubating nests for this year. After Category 1 Hurricane Earl made landfall in Belize, there was only hope that the nests were not affected. August is usually the peak period for the nesting season in Belize, and the Ambergris Caye Marine Turtle Program (ACMTP) recently made another assessment post-Earl on Tuesday, August 9th.
The three species native to Belize are the Loggerhead turtle (ChleoniaCaretta), the Green turtle (ChleoniaMydas) and the Hawksbill turtle (Eretmochelys imbricate). After a crew of Hol Chan members and volunteers assessed Robles Beach, they observed that the hurricane brought a lot of debris to the nesting site, and caused erosion to the southern end of the beach. They recorded two nests as hatched prior to the storm, and one nest completely spoiled. 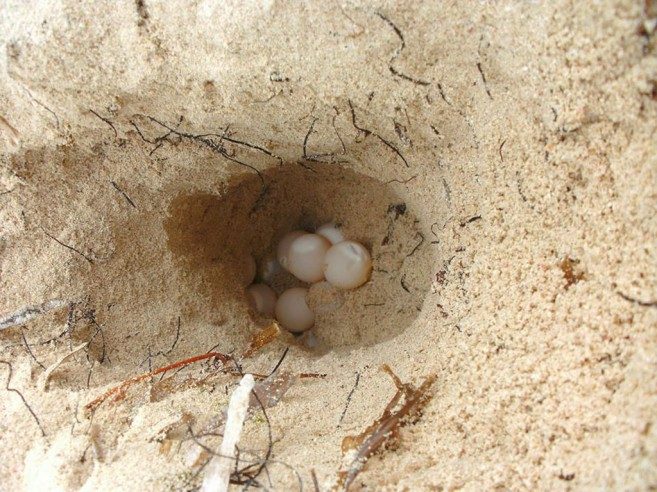 According to Kirah Forman-Castillo, a Marine Biologist at Hol Chan Marine Reserve and leader of the ACMTP, a full assessment was not completed due to lack of staff and volunteers. “We still have not located all the nests as yet. There are only two nests that we have confirmed to have been washed away by the hurricane, and we are still in the process of searching for the other nests that were affected. However, the good news is that we discovered two new nests at Robles since the storm,” said Forman-Castillo.
Since the turtle nesting season culminates in the next two months, there are too many unknowns for Hol Chan to make predictions. “We are just hoping for the best and will continue to try and locate the nest that were laid before the storm, and to look for new ones. We are still hopeful that the hurricane did not destroy all the nest, and that a few survived,” said Forman.
Hol Chan indicated that extreme weather conditions can have a severe impact on the nests survival rates. In the case of hurricanes, high tides can prevent nests from hatching. Unfortunately, the sea turtles run the risk of their nests being entirely wiped out if a stronger hurricane comes along. This means that an entire season of new hatchlings will be gone, and cause their population to decrease. In bad weather, other marine animals are able to relocate and cope, but turtle nests are immobile, impacting nests and corals greatly.
According to Hol Chan, erosion is the main issue when it comes to nesting. Currently, there are natural fluctuations within the beach, and the ACMTP is working on a project that will use aerial imagery to map the beach over time to understand said fluctuations.
The public is also encouraged to be aware that Robles and Rocky Point beaches are sea turtle nesting areas and nesting sites should be respected. “Most of the time, these sea turtles cannot recover from impacts of human interference, beach lighting, seawalls, poaching of eggs, boat strikes, fishing, etc. All these things are occurring and we need to start mitigating human actions to ensure that the population of one of our most charismatic marine animals does not decline,” said Forman.
Traffic and garbage have been major contributors negatively impacting turtle nests. In the past, marked nests were ran over by golf carts, causing the sand to compact, and making it difficult for the hatchlings to dig their way out after they hatch. Visitors should be mindful of their surroundings, and to not dispose any garbage in the nesting areas.
Not only are sea turtles ecologically important, but they contribute greatly to our tourism industry. In the case of Ambergris Caye, healthy marine life means continued tourism. Hol Chan stressed how the tourism industry ties heavily to the health of the reef, and how a lot of livelihoods are at stake if our marine habitats degrade. “It is in the interest of everyone, from the persons who clean the hotel rooms, people working in restaurants, to the tour guides, and even construction workers, to be environmentally conscious. We often think about the fishermen and the tour guides and operators as the ones that would be most affected, but the reality is that the effects would trickle down throughout the community,” said Forman.
The community can also help preserve turtles by reporting any sign of turtle nests. The ACMTP will then be able to verify, confirm, and mark the nest. You may report all suspected nests or sea turtle crawls to the Hol Chan Marine Reserve office at 226-2247.