An investigation into the effect of Sargassum in the marine environment surrounding Caye Caulker was conducted by a team comprised of members from the Belize Coastal Science Alliance and the Ocean Academy High School. The project aimed to find out the magnitude of the Hypoxia (low oxygen conditions) believed to be the result of rotten Sargassum. As such, the project also studied the comparison between areas on that island that have and have not seen human intervention. At the end of the research, and according to the findings, it was concluded that the area receiving human intervention had higher oxygen levels compared to areas that did not. This result advocates the initiative that removing the Sargassum from near shore water areas does reduce the impact to local marine life threatened by the large mats of this brown seaweed accumulating on coastal areas. 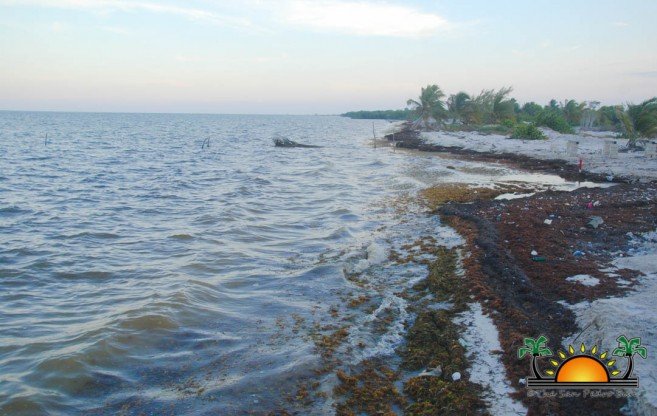 The algae naturally occurs in the Sargassum Sea on the north-east Atlantic Ocean, providing the basic structure for complex habitat and food chain. Many small sea critters make the floating algae their home, including certain species of shrimp, crabs, sea horses, and baby turtles among other creatures. It also provides a good hiding area from small fish that are swimming away from predators. In recent years, strong easterly winds have pushed mats of Sargassum south-ward to the Caribbean Sea where it has been nurtured by waste nutrients found in those waters. This has led to a high overgrowth of the algae that has washed onto the coasts of many Caribbean island countries, including Belize. Beaches have been choked with large amounts of Sargassum that upon rotting, emits a putrid smell. In addition its accumulation along the shorelines, it deprives these areas of oxygen, creating dead zones. 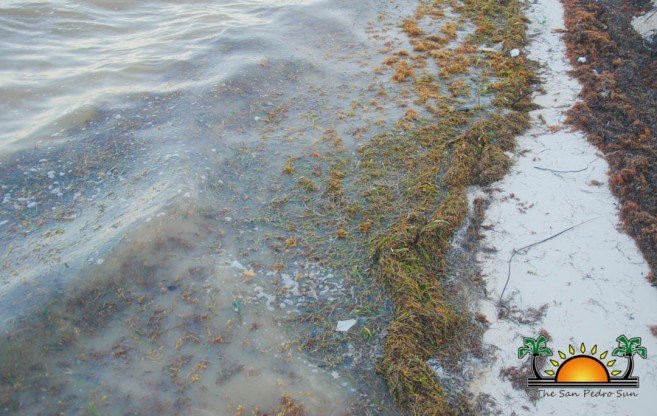 In Belize, at certain times of the year, when the bloom of the algae is at its strongest, it has even killed fish population that lives near the shorelines. According to the investigation, the normal oxygen concentration in tropical seas lies between 6 and 8 mg/l, depending on temperature and water movement. If the oxygen concentration is than 3mg/l, this level can kill fish larvae that require higher levels of concentration. These low levels are also bad enough to stress adult fish, making them weak, less efficient, and more vulnerable. When the seaweed consumes all oxygen, and levels reach below 1mg/l, that is when marine life begins to perish, thus creating a dead zone.
During the project, seven sites were inspected throughout the island: one site on the leeward side and the other six spread across on the windward side. These sites were docks, including docks at Tarpon, Caveman, San Pedro Belize Express, Tropical Paradise, Margarita Mike’s, la Isla, and Blue Sea. Every day and at the same time, measurements were recorded at the base of the dock. Each site had a point A and B. Point A was at the point just far enough from the beach to be at approximately one foot of water to allow the instrument to read. Point B was at the end of the dock. A scale was pre-planned to denote the level of built-up of sargassum as it extended horizontally from the beach. The scale used categories of width and stages of rot. The investigation reported that Sargassum accumulated against the beach floating at surface level with bright golden yellow color was classified as early decay. Midwater or neutrally buoyant sargassum, light brown in color or with a dusted look was considered mid-stage decay. Sunken, dark brown sargassum and disintegrating material were classified as late-stage decay.
Other factors that were also recorded include the weather conditions, atmospheric pressure, dissolved oxygen, salinity, turbidity, and temperature for each site.
The results showed temperatures at A were 29.74C with a standard deviation of 2.17, the average temperature at B was 29.55C with a standard deviation of 1.98. The average temperature excluding site number one for point A’s was 29.78C, and point B was 29.53C. The site on the leeward side was found to be a poor control and had lower levels of dissolved oxygen compared to the other sites. The build-up of Sargassum across the sites varied, and although some areas were choked with the seaweed, they were relieved by human intervention. The results began to show the areas with the massive build-ups of the decaying seaweed that received no attention were the potential sources of dead zones.
The deficit of oxygen or Hypoxia appeared to be localized, as a 100 feet from the shore, the oxygen levels are relatively normal. The conclusion of the research highlights that the lethal amount of Sargassum that can affect larvae, and some fish is around 17 feet of this brown algae. It was also discovered that anything above 25 feet is lethal to most multicellular organisms.
Another observation that is also a threat to marine life is the build-up of acid caused by the decay of Sargassum, impacting the ocean’s chemistry and local calcareous organisms such as the Caribbean Spiny Lobsters and coral reefs. The report indicated that addressing the Sargassum issue is very important for both Caye Caulker and Ambergris Caye, because the increase of its influx has not just created large dead zone areas, but also claimed many bonefish and permits, two protected sport-fish species in Belize and drivers of a multi-million dollar fly fishing industry.
The Sargassum problem is far from going away, and environmentalists claim it is a human-made natural disaster. They believe that it is fitting that humans try to fix the issue preventing further damage to the sensitive marine ecosystems, which are the engines of Belize’s tourism industry.