The health of the Belize Barrier Reef System is becoming more than a priority for the environmentalist community as Belize’s reef is under attack by a disease called ‘Stony Coral Tissue Loss Disease.’ The damaging coral disease primarily affects the stony coral species and has killed out large areas of coral in other regions such as Florida USA. In Belize, the coral infection was first detected in July of this year at Bacalar Chico Marine Reserve in northern Ambergris Caye. Local biologists teamed up with international counterparts and applied a treatment composed of chorine and shea butter to the affected coral, but after several weeks, they claim the method is not working and are seeking other forms of treatment before the disease spreads to other areas along the Belizean coast. 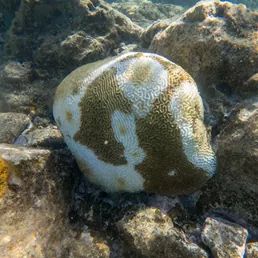 The disease is new, and researchers and scientists are still trying to find out what causes it and how to properly treat it. The treatment applied at Bacalar Chico was applied in the form of a paste to the affected areas of the coral to decrease or eliminate the infection. Unfortunately, the remedy was unsuccessful, and biologists in Belize plan to explore another form of method used in Florida.
The manner Stony Coral Tissue Loss Disease kills is by causing lesions on the coral, which causes the tissue of the coral to slough off, ultimately leaving bare skeletons and patches on the corals. It spreads rapidly on the coral colonies and between different types of corals with a high rate of mortality and spread between the susceptible corals. It attacks the fundamental corals that build the reef like brain and boulder corals. On Ambergris Caye, the only area in the country where it has been detected, it appears to be spreading in a southward motion. According to some tour operators, signs of the Stony Coral Tissue Loss Disease have been noted in the Mexico Rocks protected area. This alarming news could affect the main economy of the island relies on fisheries and tourism, and without the reef such industries can be significantly jeopardized.
Estimates are that the Belize Barrier Reef brings in over $28 million in revenue from marine products every year. The loss of the tourism industry would mean hundreds of millions in deficit for the national economy. Besides monetary revenues, if the disease kills the reef system, the natural barrier that currently protects the Belizean coastline against hurricanes and storms would diminish, jeopardizing the livelihoods and protection of the Belizean people.
At a workshop in Belize City on Tuesday, October 8th, Fisheries Administrator, Beverly Wade weighed in on the importance of the reef. “The Meso-American Reef is central to the economies of the region, particularly for Belize with fisheries and tourism,” she said. “It is really a universal heritage, and at the end of the day, its health really determines how well we do for a number of our productive sectors.” The workshop, which will run for three days will see researchers and scientists share best practices that are available in Florida, Mexico and other countries. At the end of the working session they expect to come up with a plan to address the situation in Belize.