On Thursday, January 23rd representatives from the Coastal Zone Management Authority and Institute (CZMAI) along with members from the World Wildlife Fund (WWF) engaged with stakeholders in San Pedro Town to present a project entitled ‘Climate Smarting Marine Protected Areas and Coastal Management in the Mesoamerican Reef Region.’ The project aims to increase awareness in coastal communities about the dangers posed to their natural resources and what mechanisms can be adopted to tackle the environmental challenges. 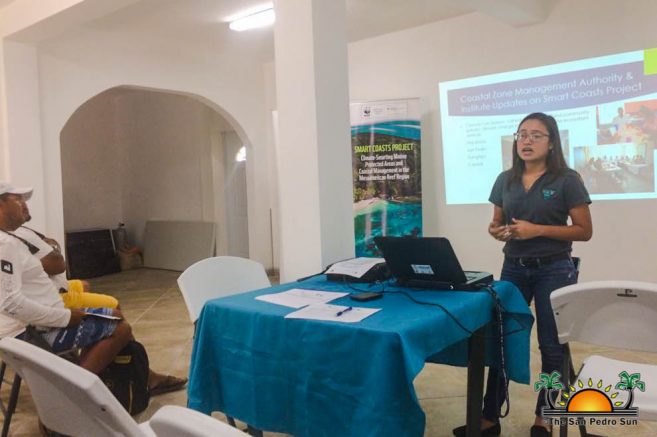 According to Azelea Gillett, Coastal Planning Technician at CZMAI, the project is being done under WWF’s watch and plans to develop and implement model outputs for coastal vulnerability, tourism and sediment retention. The session in San Pedro saw a handful of stakeholders, who were engaged and asked for their input in order to validate the models. “The input of the stakeholders in this area of the country is vital to validate the models and go to the next step,” said Gillett. “The next phase of the project will see these models being used to develop certain policies and make it available to protected areas managers to further enforce their regulations.” Gillett stated that the goal is to promote the protection of coastal areas as it is vulnerable to natural and man-made disaster. They also aim to educate the coastal population about the importance of certain resources like mangroves, which protect the shorelines. 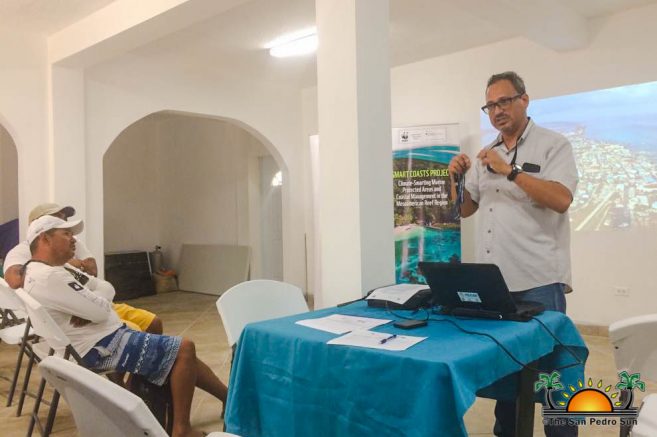 WWF’s Roberto Pott is heading the program, and he explained that many of Belize’s coastal communities need to start acting now if they want to save their livelihood: fishing. “There is a need to understand that mangroves are extremely important for any coastal community. It can protect against storms, and provide a nursing grounds for the replenishment of fish stock,” he said. Pott explained that the fish population along Belizean waters is decreasing, with little opportunities for certain fish species to reproduce. The destruction of natural habitats such as sea grasses and mangroves for development can be catastrophic for places like San Pedro Town, which depends on tourism. He emphasized that the building of sea walls to replace mangroves not only removes the charm of the area, but kills what attracts tourism. “You remove the natural habitats, nursing grounds, and both the tourism and fishing sector will suffer because without an area for fish to reproduce, they can disappear,” said Pott. According to him, the project hopes to allow for institutionalization of climate-smart policy and management frameworks for coastal and marine resources. It also seeks to replicate the activities beyond the geographical scope and duration of the project. Pott indicated that the preservation of the island’s natural resources is imperative and encourages stakeholders to raise awareness for sustainable development that will be able to coexist with the natural environment. 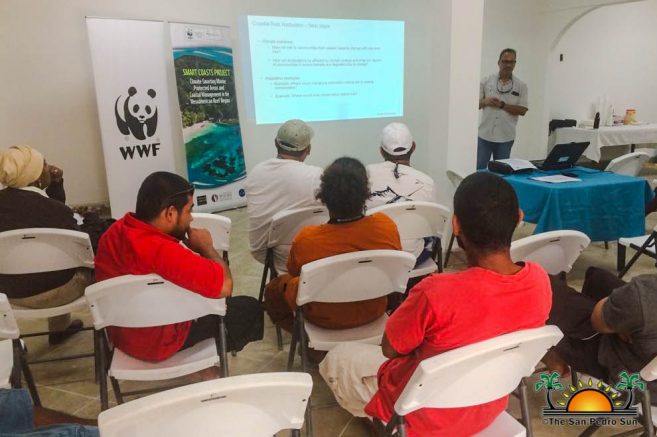 Ambergris Caye, like others parts of Belize, is not considered at risk of losing its coastal protection yet. However, if fisheries regulations are not properly enforced, leading to overfishing, and if more mangroves are destroyed, the island’s main livelihood, tourism and fishing may be significantly jeopardized. The project has been presented to several coastal communities across the country, considered key areas for tourism and fisheries. A second round of presentations is expected to take place in the near future in order to implement a plan of action that will safeguard the future of Belize’s coastal communities.