« Older: Forward Operating Base at Sarstoon coming along
Newer: » BTV Expedition greeted with a blockade from the Guatemala Armed Forces


From Tuesday, February 16th to Wednesday, February 17th, Belize hosted the 27th annual Intersessional Meeting of Caribbean Community (CARICOM) Heads. The event saw the participation of representatives from all 15 member states, with the Prime Minister of Belize, Honorable Dean Barrow heading the meeting as the acting Chairman of CARICOM. The two-day meeting aimed at discussing issues within the region and developing possible solutions, was held at the Placencia Peninsula in the Stann Creek District. Among key issues discussed were regional health, security and economic threats. 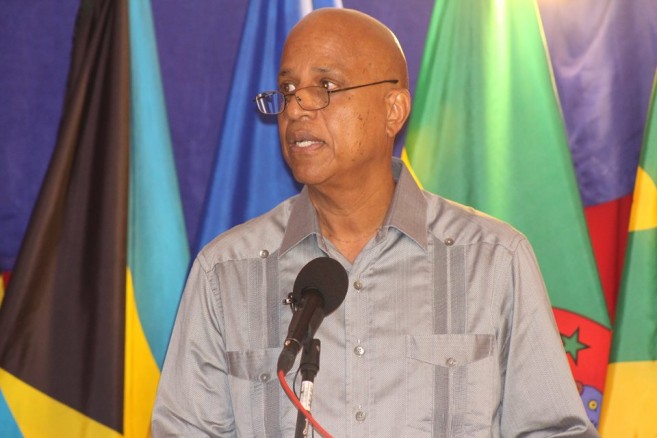 Opening the forum on Tuesday was Barrow, who delivered the official welcoming remarks, setting the tone for the meeting. “There has been a failure of the world economy to recover properly from the shock of the financial crisis that began in the last part of the first decade of this new century. That failure, for the majority of us in CARICOM, has meant slow growth, increasing difficulties with our public finances, and tremendous strains on our capacity to satisfy the life-improvement aspirations of our people. And it is worth noting that even in the few countries that have shown substantial enough expansion, much of the net effect has been depreciated by population increases. On the bright side, though, there appears to be what we hope will be a sustained resurgence in our region’s all-important tourism industry. This would be a welcome offset to the continued volatility in our commodities sector,” said Barrow.
He went on to speak of many issues the country of Belize is facing, including the reduced PetroCaribe funds due to declining oil prices and the loss of correspondence with USA banks. “The oil conundrum has severely constrained the flow of resources to those of us that participate in the PetroCaribe arrangements. This is, of course, in consequence of the havoc done to Venezuela, the source of our erstwhile bounty. To compound matters, it is clear that the oil price phenomenon is symptomatic of the more generalized weakening, to which I earlier alluded, in commodities markets. This worsens the crisis situation in public finances in certain parts of the Eurozone, so that altogether there appears to be a distinct possibility of the world economy sliding back into recession. The consequences that would entail for our region are both obvious and frightening. And when we move from the general to the particular regarding global economic and financial currents, there is one already extant development with absolutely cataclysmic ramifications for us. I am talking, of course, about the phenomenon of so-called de-risking. Under pressure from their regulatory authorities in Europe, and especially the US, banks in those jurisdictions have been closing their correspondent relationships with our indigenous financial institutions. This deprives our banks of the ability to keep US deposits, do wire transfers and facilitate credit card settlements for their local clients and our economy. The implications of this for our international trade, for our remittances, for our structures of production, consumption and investment, are so obvious as to require little further elaboration. It is therefore no hyperbole to say that, especially in an environment where the value of our imports and exports taken together equals or exceeds our GDP, any attenuation, not to say complete cutoff, respecting our trade and remittance flows, constitutes a clear, present and compendious danger,” explained Barrow. He ended by asking all CARICOM leaders to unite in the effort to reestablish economic stability in the region.

Also addressing on the first day was former CARICOM Chairmen, Prime Minister of Barbados, Right Honorable, Freundel J. Stuart. “I am especially pleased to be here on my first visit to Belize, and to be able to savor the charming manner and warm hospitality of the government and people of this great country, often described as the potential bread basket of the Caribbean… I have frequently stated my deep conviction that our decision-making must be orderly and rigorous. Only in this way can we deliver to our peoples the regional public goods they expect as the fruits of our deliberations. In this context, I was especially satisfied that at our last meeting we adopted some clear rules about how the Conference takes and implements its decisions,” said Stuart who also called for unity with in members. “I should like to highlight another one of the essential principles that must permeate what we think, what we say, and what we do as a region. I speak of the need for an unshakeable commitment to unity in the face of adversity. This year, 2016, is an important year for all our countries, as we propose to implement some of the more important initiatives to which we committed ourselves in 2015, and to further those begun in previous years… In order for CARICOM to fulfill its immense promise, first, we should look at the strengths of our movement and seek to retain them at all costs; second, we must look backward at important elements that we have lost in the regional integration movement and seek to reclaim them; third, we must look inward at our movement to carefully identify those aspects that hinder us, which we can discard, and should do so with some urgency. We must then look forward to see what new or different measures we need urgently to adopt to ensure that our movement remains both vibrant and relevant in this 21st century, but more importantly, that it remains a sustainable project that continues to meet the needs of the people of the Caribbean.” 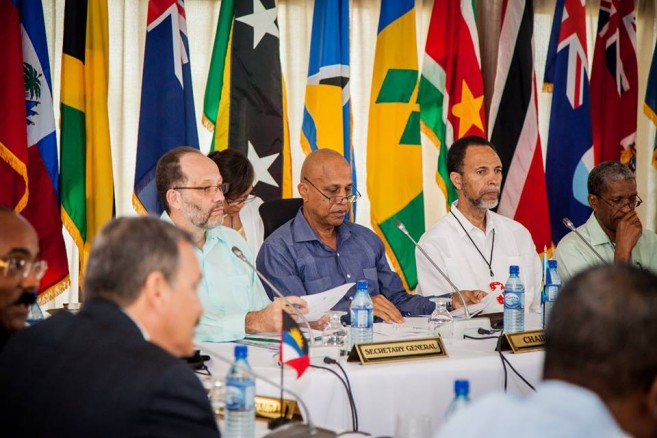 As the meeting progressed, Barrow made emphasis on the threats to the region’s banking sector. He indicated that the USA de-risking could have “cataclysmic ramifications” for the Caribbean, and a “relentless” campaign must be waged against it by all CARICOM members. The matter was a key agenda item of the two-day Summit. The threats discussed relate to the possible loss of access to the international financial markets by mainly the Regional indigenous banks, an issue that Belize has faced in the past year. One of the suggestions Barrow put forward for consideration, was for respective country banks to get together across jurisdictions and, as a bloc, approach target banks in the USA for pooled correspondent services. “Meantime our campaign, and I speak now of CARICOM, continues. And it cannot be other than relentless in the face of the possible correspondent banking Armageddon that we face. It is therefore a matter that looms extremely large on our Agenda over the next two days, and has already been the subject of a dedicated Finance Ministers meeting,” said Barrow.
CARICOM Secretary-General, Ambassador Irwin LaRocque also addressed the correspondent banking relationship issue and referred to it as an immediate existential threat. “This situation threatens the financial and economic stability of our Region. It is having an impact on the ability of our people to receive their remittances and transfer their funds for trade and investment transactions. This state of affairs demands that we act collectively to address this issue with the relevant regulatory authorities and the international community,” said LaRocque. 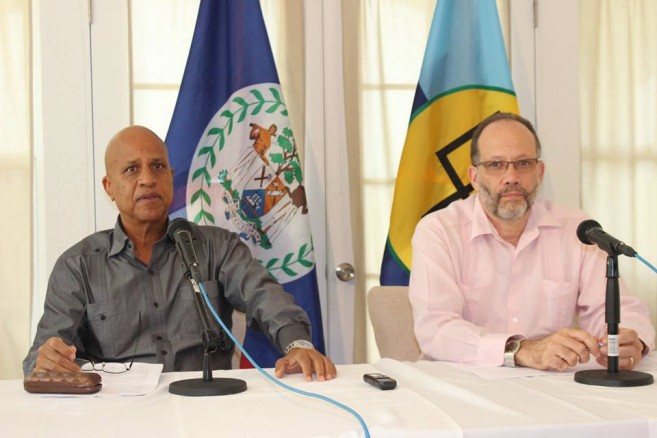 LaRocque also called for action against security, economic and health threats. “As we move to enshrine Security as the fourth pillar of integration in our Treaty, it is important that we demonstrate our resolve by formalising the regional legal framework and supporting institutional infrastructure that would help us fight the menace of crime and threats to our security,” said LaRocque. Regarding the threat from Zika, LaRocque said the Caribbean Public Health Agency (CARPHA) has been at the forefront working with member states and other institutions in dealing with this challenge.
Climate Change was another key issue discussed. Stuart said the Community got major breakthroughs that it wanted from the COP 21 (Climate Conference) Agreement (an international agreement on climate change to keep global warming below 2°C) signed in Paris in 2015. “I am of the view that, the agreement, implemented with seriousness and determination by the international community, will allow us to address the multi-faceted challenges which climate change poses for our countries,” Prime Minister Stuart said. Barrow went on to assure that the Task Force on Sustainable Development, led by the Honorable Dr. James Fletcher, and the team of negotiators and experts would continue their work to facilitate the implementation of the Agreement reached in Paris. 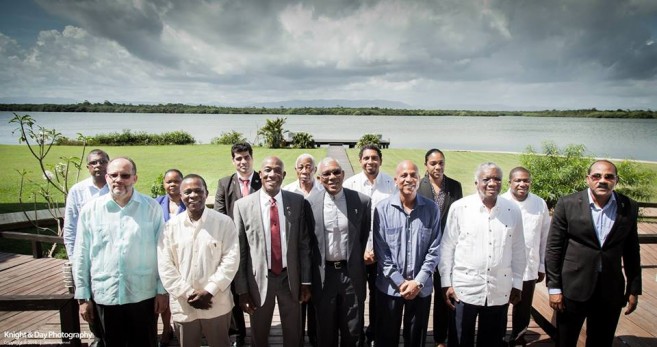 At the closing of the meeting, CARICOM Secretary-General Ambassador Irwin LaRocque was re-appointed to a second term of office. “The Secretary-General’s initial five year appointment was scheduled to end in August 2016, and Heads of Government decided to deal with the matter of his reappointment now because they felt the next meeting in July 2016 was too close to the August expiration date. I’m pleased to say that there was unanimous agreement for the SG’s reappointment. I want to make clear that on a personal note, I am as convinced as anyone else, and perhaps more so, that the Secretary-General has done an exemplary job. His commitment to reform, the changes he has already made along the lines of obliging the Secretariat and the Community to become more productive, more efficacious, are well known, and he has done all this while remaining throughout, extremely even tempered and accessible. I am pleased to say what a tremendous job of work this Secretary-General has done,” said Barrow.