On Thursday, June 18th, nine armed soldiers from the Guatemalan Armed Forces (GAF) vessel attempted to stop a Belizean vessel with two media personnel from traversing the north side of the Sarstoon Area. The incident occurred after 6AM, and the Belizean vessel was able to speed away back to Punta Gorda. The Government of Belize (GOB) is investigating the incident in an effort to verify all the particulars, including that the media vessel was in Belizean waters. Guatemalan authorities have communicated that they attempted to stop the vessel to inquire the reason the media was taking photos of their naval base. However, video footage has shown that the GAF claimed that the vessel was on Guatemalan waters. 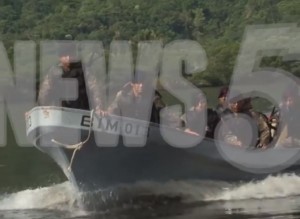 Mike Rudon, news reporter at Channel 5, recounted to officials that as they traveled, the GAF followed them. As the Belizean vessel entered Sarstoon, and turned back, the GAF ordered them to stop, but the Belizean vessel refused. The GAF continually argued with the Belizeans that they were in Guatemalan waters, and immediately ran their boat close to theirs. However, since the GAF had more passengers on their boat, the Belizeans were able to outpace them. In addition, Belizeans on the vessel reported seeing Guatemalans fishing with gillnets near the mouth of the Sarstoon on the Belize side, and mentioned that one of the dugouts was full of gillnets.
The GOB was informed that the GAF was significantly more hostile than in the May 27, 2016 incident, where two boats filled with Guatemalan soldiers blocked the Belize Defense Force from passing through the Sarstoon River.
According to a press release from the GOB, “they are seeking to confirm the details of the Channel 5 version of events. GOB makes clear its firm position that if the report is accurate, the incident would constitute a breach of the spirit of the Confidence Building Measures and must also be rejected as prejudicial to the ongoing diplomatic efforts, including next week’s meeting in Washington, to establish a bilateral Cooperation Mechanism for the Sarstoon.”
Within the bilateral talks between Belize and Guatemala in Istanbul, Turkey on May 24th, the Government of Belize revoked a statutory instrument (SI) that was put in effect on May 9th that prohibited Belizeans from going to the Sarstoon. Both parties had committed to start working on a formal cooperation mechanism that will respect Belize’s and Guatemala’s respective use and navigation of the Sarstoon.
However, only three days after the statement, reporters from Kremandala traveled to the Sarstoon, and GAF soldiers also blocked their entry into the Sarstoon. It has been reported that on Saturday, May 28th, the Embassy of Guatemala in Belize wrote Belize’s Ministry of Foreign Affairs, disputing Belize’s claim there would now be untrammeled traffic by Belize’s military and civilians along the Sarstoon. The Guatemalan Embassy argued that the release from Belize did not reflect what the parties had agreed.
The Embassy’s letter also states that Guatemala considers the Sarstoon River as an integral part of its territory, and added that several of its state institutions, including its Ministry of Defense, would be involved in efforts to reach an agreement on the Sarstoon.
Belize and Guatemala met Tuesday, June 21st at the headquarters of the Organization of American States (OAS) in Washington, DC, USA to further discuss the problems at the Sarstoon.