Home » Government » “To the ICJ or not?” BNTU holds forum


As part of their educational campaign “Stand for Belize,” the Belize National Teachers Union (BNTU) has been holding a series of informative sessions across the country on taking the Belize-Guatemala Territorial Dispute to the International Court of Justice (ICJ) to settle. The educational presentations were held on May 18th and Saturday, June 4th. The first session was held in San Pedro Town at the Angel Nuñez Auditorium, where different perspectives were presented to determine whether or not the unfounded Guatemalan claim should indeed be taken to the ICJ for a definitive resolution.
Presenters at the forum included Ambassador of Trade at the Ministry of Foreign Affairs Stuart Leslie who has served as Belize’s Permanent Representative at United Nations (UN) from 2000 to 2005, Robert “Bobby” Lopez from the Belize Progressive Party (BPP), and representatives of the Vision Inspired by the People Party (VIP) among other invited guests. The presenters were amazed to find out that the majority of the attendees had been born after 1981. 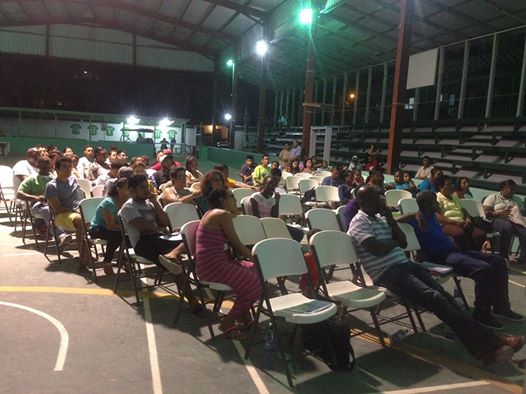 ‘For” was Ambassador Leslie, who recommends that Belize should head to the ICJ. He emphasized on the fact that Belize has experienced lawyers and that there is no way the country can lose the case in the international arbitration. According to Leslie, one of the main reasons for trusting the international court is the fact that Belizeans have occupied Belize for so long, in contrast to any occupation or governance by Guatemala. He also exposed some of the historical ratifications in which Guatemala failed to do when Great Britain was willing to take the issue to the ICJ long before Belize became independent. Therefore, such Guatemalan reluctance to cooperate is another point against the neighbouring country. “We have a strong case and now is the time to go to the ICJ,” insisted Ambassador Leslie. He assured the audience that the country has nothing to lose, since the case is in good hands of the experts. Leslie pointed out similar cases which ended positively for the underdog country.
Opposing Leslie’s point were the guest members of the BPP and VIP. They argued that Belize should not head to the ICJ, but rather, go along with the United Nations (UN) Security Council instead. The call to not adhere to an ICJ resolution was very strong, and even the idea to have a referendum on the ICJ or to include land, insular and maritime cession was disregarded.
According to BPP’s Bobby Lopez, if the government continues along the same path as they have been on, the time to settle the dispute in an international arena is not now. He stated that Belize is currently negotiating under article 33 (1) of the UN, which applies to situations under peaceful understandings between two parties. According to Lopez, Belize should adopt the norm of UN article 39, which states that negotiations are underway in the middle of threats of the peace between two parties.
Belize was recognized with all its actual territory in 1981 upon obtaining independence by the UN, thus, Belize needs to use this fact as its advantage which is backed up by article 39. During the forum, it was stated that if there are negotiations with Guatemala regarding the territorial dispute, it should not include land cession, since according to the UN, Guatemala must recognize the country’s boundaries established in the 1859 treaty. Prior to the boundary treaty, in 1856, the Dallas Calderon Treaty stated that from the end of the Yucatan peninsula the boundary of the English settlement of British Honduras (now Belize) would start and extended all the way to the Sarstoon River at the southernmost tip of the territory. The treaty also demanded that Great Britain urgently establish a western boundary with Guatemala, since the northern and southern borders had already being established.
BPP Leader Patrick Flowers, explained that one of the ways to negotiate and try to solve the long-lasting dispute with the neighbouring country, is perhaps through compensation or negotiated access to maritime areas which have already been established in the 1990’s with the government of former Guatemala’s president Jorge Serrano Elias. The Guatemalans were offered access to portion of Belize’s southern waters including the Sapodilla Cayes, however the Guatemalan congress did not agree to such proposal and upon Serrano Elias recognizing Belize as an independent nation, he sought political asylum in Panama after he failed an attempted self-coup. The Belize and Guatemala situation did not get any better after that incident.
However, according to those arguing against going to the ICJ, Guatemala’s current position is to claim not half, but the entire territory of Belize. According to Guatemalan officials Belize belongs to their department of Alta Verapaz, from the Belizean Districts of Toledo, Stann Creek, Cayo to parts of the Belize District. The presenters urged the Government of Belize to seek assistance from the UN Security Council, who in one instance, had demanded the United Kingdom to find a resolution to the territorial dispute with Guatemala without Belize losing any of its territory. Some of the strong recommendations from the presentations are for Belize to head to the UN Security Council and have Guatemala out of our river and maritime waters, and to once and for all stop their threats and aggression towards Belize.
According to both members of the BPP and VIP, heading to the ICJ is giving Guatemala a blank cheque. There is a lot to risk. “We should move completely from the notion of the ICJ and deal directly with the UN Security Council which oversees the ICJ. If this is done, Great Britain can be brought into the picture to try and assist in the resolution of the issue,” said Lopez. “At the same time, if there is a need to head to the ICJ, the UN can dictate that the case should be submitted with Belize not compromising its territory.” It was also suggested that Belize needs to reach out to its allies so they can create pressure on Guatemala, to ease down their hostile behaviour towards Belize.

A different reason for resurrecting the claim
Of much interest to those in attendance was a theory that was brought to light. It is believed that the sudden interest by Guatemala to get the southern part of Belize has to do with political interest. One of the largest oil reserves is believed to sit on the Belizean side, near the Temash River. This is where the American company Capital Energy was given the concession to drill. However, they lost the concession in court to the Maya people, who see those areas as their ancestral lands. According to speculations, the knowledge of this oil reserve in southern Belize is why Guatemala is now so aggressive and persistent in acquiring that southern portion of Belize.
Organizers believe that the presentation was quite successful, and a strong message was delivered during the educational campaign. The group of presenters headed by the BNTU hope that the Ministry of Education understands the importance of the topic and that students are given the right facts about the current situation.
The educational campaigns will continue throughout the country and even beyond our borders. A presentation on the Anglo-Guatemala issue and alternatives to the ICJ will be held on Sunday, June 12th at Holy Name of Jesus School in Los Angeles California USA. Members of the Belizean public Diaspora are expected to attend.

Credentials presented to the Governor General of Belize