H.E. Carlos Fuller, Belize’s Permanent Representative to the United Nations (UN), presented his credentials to H.E. António Guterres, the Secretary General of the UN, at the UN headquarters in New York on May 17, 2021. 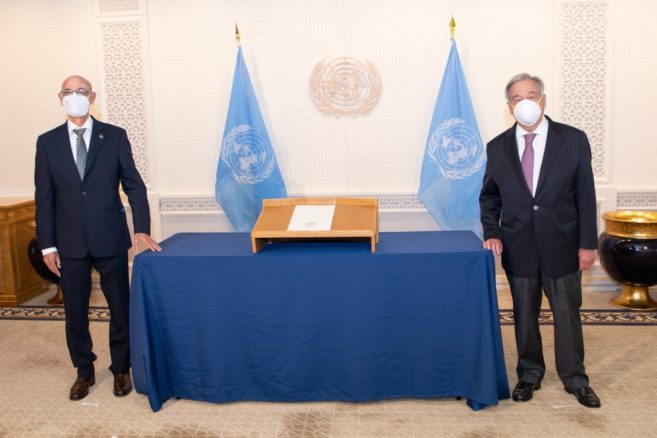 Ambassador Fuller delivered greetings on behalf of the Governor General, Foreign Minister Hon. Eamon Courtenay, and the Government and people of Belize. On receiving Ambassador Fuller’s credentials, the Secretary General noted that Belize has played a major role in the UN system furthering the interests of small island and low lying developing states, climate change and oceans. Ambassador Fuller assured the Secretary General that Belize’s Permanent Mission to the United Nations would continue to support the UN system in these areas.
This was a ceremonial presentation and a photo opportunity as Ambassador Fuller had presented his official credentials via the UN’s e-portal system on March 31, 2021 following his arrival in New York. This is a consequence of the measures taken by the UN to ensure a safe working environment amidst the COVID-19 pandemic.
Ambassador Fuller was accompanied by Ms. Sharleen Henderson, executive assistant to the permanent representative. The permanent representatives of the Bahamas and Burundi and the representative of the International Renewable Energy Agency also participated in the ceremonial presentation of credentials.

Dr. Marvin Manzanero may return to the Ministry of Health and Wellness