Home » Environment » Belize can have Energy without Oil

Belize can have Energy without Oil


A bottom up approach driven by consumer demand and supplied by private sector cost efficiency is the best way to meet Belize’s need for renewable, clean energy and to reduce Belize’s dependency on fossil fuels. This would eliminate any need for offshore oil exploration which would endanger the Belize’s pristine marine environment and the $650 Million annual value it provides to the tourism, fisheries and disaster management sectors. This was the finding of a panel of scientists and many other youthful participants at a one-day symposium on “The Nature of Energy vs the Energy of Nature” hosted by Oceana Belize at the Radisson Fort George Hotel in Belize City on Wednesday, July 27th. 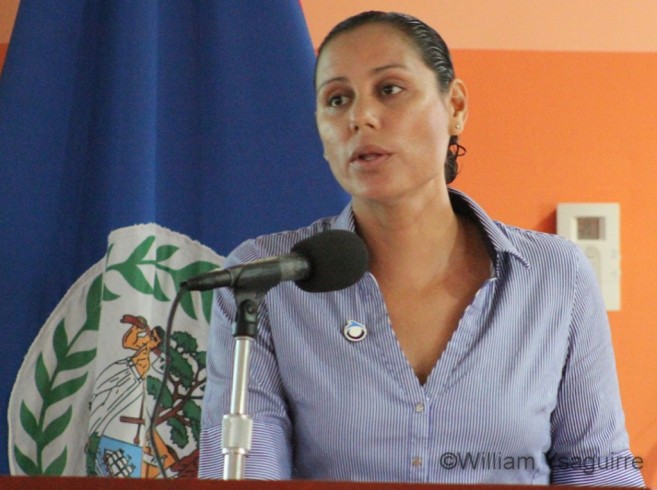 One of the presenters, former United States Vice President Al Gore was present via video presentation from YouTube, and his message was that ultimately the world will win the fight to find renewable sources of energy. He cited the exponential increases of energy production from solar, wind, hydro and biofuels over the past 20 years, achieving economies of scale to make this kind of energy even cheaper and available to people who have been off the grid since the dawn of civilization. He noted that in India, where more people are living without electricity than entire population of the United States, cheaper solar panels and storage batteries are making electricity available to people living in mud huts with thatched roofs, driving a wave of entrepreneurship. He cited Bangladesh as one of countries with the largest growing demand for this sort of cheap, renewable energy, especially since Bangladesh’s low-lying coastal areas make it especially vulnerable to sea level rise from climate change.
Belize’s climate change focal point Mr. Carlos Fuller from the Caribbean Community Climate Change Centre (otherwise known as 5C’s) admitted Al Gore is a tough act to follow; as he outlined the seven areas in which Belize is preparing a national policy and implementing measures to mitigate and adapt to the effects of climate change: first and foremost – water! The other six areas are all related to water and equally important to the national economy: agriculture and food production, health, energy, coastal and marine areas including fisheries, tourism and forestry. 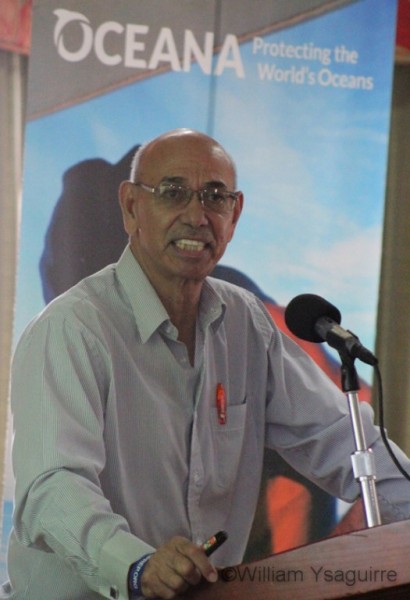 Belize’s population lives largely in coastal communities, but Fuller pointed out that environmental issues have forced San Pedro and Caye Caulker to resort to reverse osmosis to meet their water needs, Placencia has to have its water piped in from the mainland, and Belize City has its water treatment plant 17 miles upriver on the Belize River where rising salinity levels from sea water is already indicating a need to relocate the plant further upstream. Warming seas from Climate Change has not only caused coal bleaching on the Meso-American Barrier Reef, which is bad news for tourism; it is also causing fish to migrate to cooler waters. As fishermen have to travel farther away from home for their catch, the increased fuel cost will drive up the cost of this once cheap food source. Aquaculture can farm fish on land, but limited water resources means a delicate balance between drinking water, domestic use, agricultural needs, energy production, transportation and other industrial uses. Water reservoirs also mean a haven for the larvae of mosquitoes and other insects which carry diseases like dengue, chikungunya, malaria and zika.
Heat and drought not only affected health, but also caused lower yields from agriculture, $400,000 losses to Belize’s cane farmers from sugar cane that was planted but failed to sprout for lack of rain. A 2-degree Celsius rise in global temperature would mean a 15 to 20 percent reduction in yield of our staple foods: corn, rice and beans. 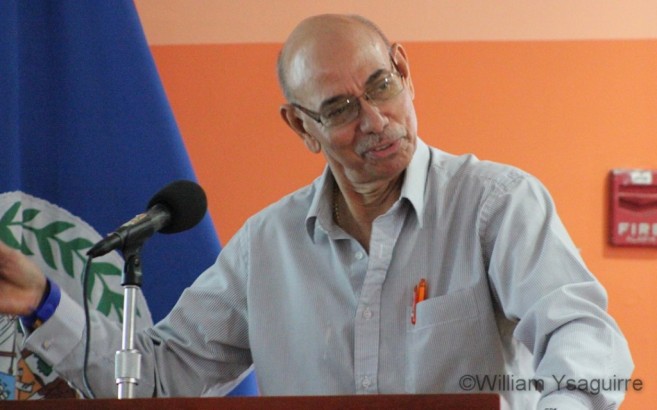 Fuller explained how carbon dioxide and other greenhouse gases spewed into the atmosphere by energy production from fossil fuels like petroleum and coal, has caused Climate Change. While Belize’s carbon footprint is so minuscule as to be negligible, less than 0.01 percent of the global total; Belize is especially vulnerable to Climate Change impacts which could completely reshape our coastline, as many low-lying coastal areas and islands submerge under the sea level rise which scientists anticipate will be 1.5 meters to 164 centimetres by the next 50-100 years. He remembered when Deputy Prime Minister Florencio Marin signed on to the United Nations’ Framework Convention on Climate Change (UNFCCC) in Rio de Janeiro in 1992; and how Belize has dutifully attended subsequent Conference of Parties (COP) meetings in Kyoto in 1997, Doha, Cancun in 2010 and most recently the Paris agreement which Belize signed and ratified in April this year. 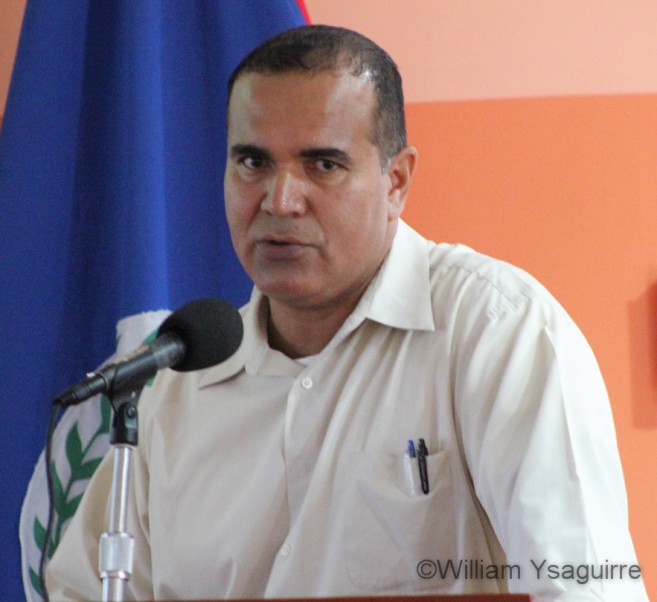 Ansel Dubon, Manager of the Energy Resilience and Climate Adaptation Project (ERCAP), cited how rainfall is now so important to Belize’s energy supply, that the Government of Belize is studying all radar images and forecasts of rainfall, to estimate the potential generation of hydro-electricity from this rain water, before it even hits the ground. Electricity is a key component of Belize’s Gross Domestic Product (GDP) of $3 Billion per year; Dubon noted that the one day Belize was without power after Hurricane Richard in 2010 cost US$4,211,600; since it has been calculated that every kilowatt-hour of electricity consumed adds US$3.19 to our Gross Domestic Product. 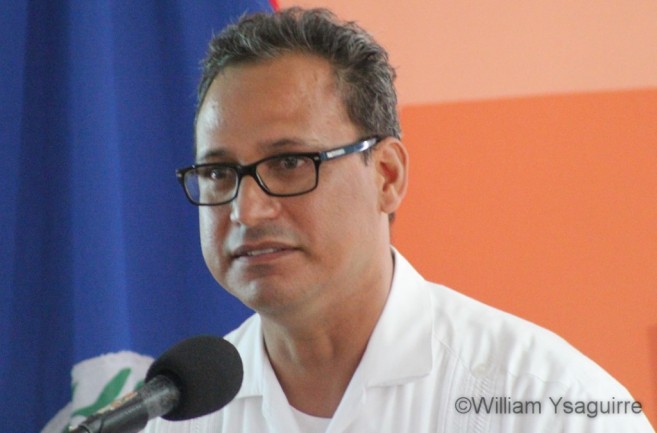 Roberto Pott, the coordinator for Healthy Reefs for Healthy People, weighed in on how the abundant fish catches of 50 years ago, as recalled by our grandfathers, are no more; and how overfishing has depleted fish stocks in some areas. Only proper management of fisheries resources can keep the industry sustainable; an issue the Fisheries Department has addressed by extending Managed Access to fishing areas nationwide.

Ms. Carolyn Trench-Sandiford, President of the Belize Association of Planners, cited the importance of proper urban planning to make Belize resilient to the destruction from tidal waves caused by hurricanes; and how these people will then meet their needs for food, water, employment, education, health services, energy and transportation 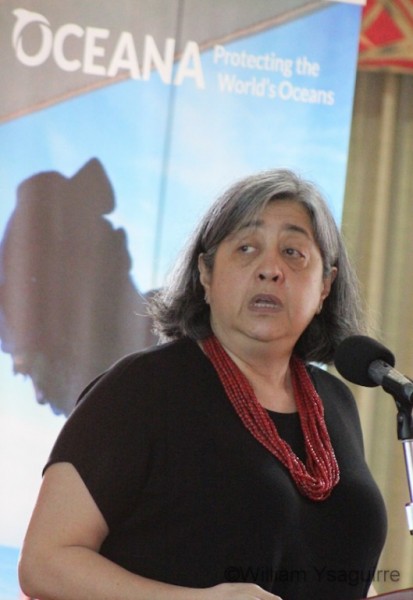 Visiting fisheries researcher Dr. Patricia Majluf, who is also Vice-President of Oceana in Peru, cited the Peruvian experience with a keystone species, the humble anchovy which was impacted by seasonal El Niño events, and how helping to preserve this important species, which had been used primarily for fish meal rather than human consumption, led to greater sustainability for all the other commercial species.

Minister of State for Environment, Sustainable Development Protected Areas and Climate Change Hon. Omar Figueroa Ph.D., in his opening address, cited how ocean acidification from acid rain threatens the survival of all coral reefs as he outlined the government’s National Climate Change Policy, Strategy and Action Plan drafted in March 2015. He emphasized the importance of considering climate change in all development plans, of the need to strengthen the institutions, government departments and universities to educate the young people with a proper understanding of Climate Change’s many effects, in that they may cope with this challenge in the future.

It’s an Island We Have to Keep Clean!