Under the Commonwealth Marine Economies Program, the Caribbean Regional Fisheries Mechanism (CRFM) and the Centre for Environment, Fisheries and Aquaculture Science (CEFAS), are preparing the first ever marine climate change report card for the Caribbean. The news was released through a press release on Thursday, December 8th, noting that the program will be funded by the Government of United Kingdom (UK). 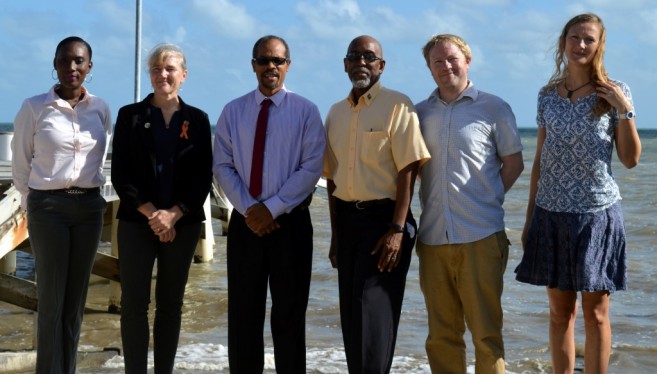 With an expected date of March 2017, the report card will provide comprehensive, peer-reviewed and highly accessible information on what is already happening, what could happen in the future, case studies from across the region, knowledge gaps and potential socio-economic impacts. It’s also aimed to raise awareness of climate change issues across the region in a way that will spur action and drive future change. The 12-page document will contain hundreds of pages of reports produced across the Caribbean.
CRFM’s Program Manager of the Fisheries Management and Development, Peter Murray, was part of the working group meeting in Belize that reviewed the major themes being assessed, as well as the “hot topics” emanating from those themes. “The CRFM is trying to ensure that the issue of climate change as it relates to the fisheries sector comes to the fore… because the Caribbean Community, Regional Integration (CARICOM) Heads of Government have put fish and fishery products among the priority commodities for CARICOM. It means that things that affect that development are important to us and so climate change is of primary importance,” said Murray.
He furthered explained that when the fisheries sector of the Climate Change Adaptation and Disaster Risk Reduction Strategy was approved by the CRFM’s Ministerial Council in 2013, climate change and potential impacts became very important to them.
Marine Climate Change Scientist at CEFAS, Bryony Townhill, is one of the experts who facilitated the working group meeting in Belize. She hopes that the initiative will bring together climate change knowledge in the region so that it is conveniently accessible, especially for those who need it for decision-making.
Townhill also reviewed the main themes chosen earlier this year for the review, a process which engaged a range of Caribbean experts. She elaborated on the important themes: (1) ocean processes – ocean acidification, extreme event (storms and surge) and sea temperature; (2) biodiversity – fish, shell fish, coral reefs and mangroves; and (3) civil society – fisheries, tourism and settlements.
Townhill said that for each of the areas cited, the working group members have helped to identify scientists and practitioners in the region who have provided the paperwork used for the review. Even before the initiative started in March 2016, CEFAS began by engaging the Caribbean Community Climate Change Center (CCCCC), another CARICOM agency which forms part of the working group.
Deputy High Commissioner at the British High Commission based in Belmopan, Grace Chun, said that the initiative originates from the Prime Minister of the UK’s commitment to put £5.6 million into helping Small Island Developing States (SIDS) in the Commonwealth.
Marine Climate Change Project Coordinator at the Marine Climate Change Center at CEFAS, Paul Buckley, is the second expert engaged from the UK. He said that they are trying to incorporate what’s been done in the UK over the last 10 years, and apply it at the Caribbean level.
CRFM Executive Director Milton Haughton is very grateful for the support being provided by the UK Government to improve awareness and understanding of the impacts of climate change on fisheries and marine ecosystems. He hopes that this initiative will empower government agencies, regional and local organizations, and persons to respond to these challenges on the basis of the best available scientific information.

More on Weather
Notice from BEL re: Hurricane Rina