« Older: Government of Belize Initiates the Development of a Groundwater Monitoring System for Aquifers
Newer: » Public Hospitals Benefit from Donation of Imaging Equipment


The Belizean capital of Belmopan has signed a motion calling for a Fossil Fuel Non-Proliferation Treaty, a global mechanism that aims to explicitly address the source of 86% of CO2 emissions that cause climate change: fossil fuels. The support was made official by a statement from the mayor with council approval.

Belmopan Mayor Sheran Palacio said: “Belmopan wants to lead the transition to a zero-emissions matrix. It is time for cities to see the economic opportunities for a new clean infrastructure (buildings, energy, transportation and waste) that avoids dependence on fossil fuels and that will not only benefit the planet but also reduce costs for the public and private sector. The Caribbean capitals must accelerate the transition to decarbonization to achieve independence in their operating systems that impact citizens above all”. 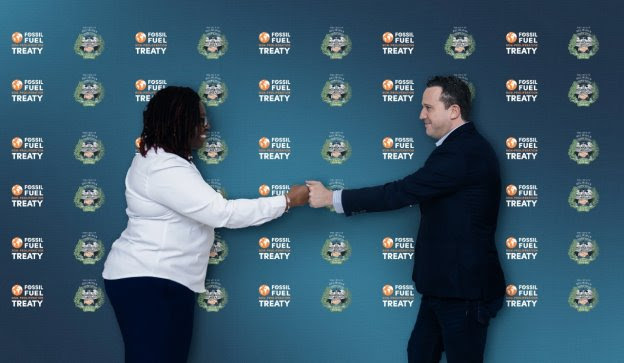 The capital of Belize itself is an example of climate adaptation, as it was founded in 1970 in response to the climate vulnerability of the previous coastal capital of Belize City, having been subject to major flooding and other impacts from tropical storms that disrupted government functions. While having an overall negative carbon footprint, Belmopan still faces climate challenges related to drinking water availability, population growth in flood-prone areas, and food security.

This endorsement is the latest in a series of serious climate actions by Belmopan, including a commitment to decarbonize by 2040 through CC35, a regional coalition building support for the Fossil Fuel Non-Proliferation Treaty across its 35 member capital cities within the Americas. It includes a follow-up action urging the national government to endorse this initiative as well. Belize as a whole already faces hurricanes, flooding, sea level rise, coastal erosion, coral bleaching and droughts, with impacts likely to intensify given the projected increase in climate volatility and sea temperature. Building resilience and engagement with development partners has been central to Belize’s policymaking and is also reflected in the country’s Nationally Determined Contribution to the Paris Agreement and work through its National Climate Change Office.

Sebastian Navarro, Secretary-General at CC35 Capital Cities Secretariat, said: “The commitments of many capitals of the Americas to Race to Zero are directly connected to adopting serious deadlines to abandon fossil fuel dependence. The climate emergency that the planet is experiencing needs clear political decisions that will also generate great economic opportunities for new players. We must protect the citizens of our region by changing the tax incentives for those who bet on the survival of humanity and also approve the necessary regulations to stop those who are leading us down the road to self-destruction.”

Latin American and Caribbean governments have been prioritising the climate fight, particularly seeking to strengthen and solidify global responses to climate change. This was evident at July’s Latin America and the Caribbean Climate Week where regional hope for action persevered as sea levels continue to rise at a faster rate than globally and population displacement is aggravated. This leadership will also be carried into the UN system as Simon Stiell of Grenada has been named the new Executive Secretary of the United Nations Climate Change Secretariat.

Tzeporah Berman, Chair of the Fossil Fuel Non-Proliferation Treaty, said: “Belmopan, like many Caribbean capitals and small island states around the world, is facing the devastating consequences of a climate crisis that they did not cause. By calling for an international Fossil Fuel Non-Proliferation Treaty, the Belizean capital is demanding a markedly different global future. One that phases out coal, oil and gas and the climate havoc they fuel and instead pivots to a renewable future where the Caribbean can thrive free from rising seas and the ravages of an unjust climate emergency.”

The Fossil Fuel Non-Proliferation Treaty Initiative is spurring international cooperation to end new development of fossil fuels, phase out existing production within the agreed climate limit of 1.5°C and develop plans to support workers, communities and countries dependent on fossil fuels to create secure and healthy livelihoods. Cities such as Vancouver and Barcelona have already endorsed the Treaty, with more considering motions to endorse. Hundreds of organisations representing thousands more individuals join the call for world leaders to stop fossil fuel expansion.

For more information on the Fossil Fuel Non-Proliferation Treaty, watch the introduction video and access the media centre.

CC35 is the coalition of Capital Cities of the Americas facing Climate Change. The organisation is elevating the voices and accelerating the commitment of the capital cities of the Americas to face the climate emergency. It was officially established under the leadership of the heads of government of the hemisphere as the first initiative born in Latin America but with the firm purpose of achieving the climate integration of the Americas through local diplomacy. Its Secretariat has the mandate to make a decisive contribution from a subnational perspective to the UNFCCC in legislation, financing and communication with the goal of raising the region’s ambition towards net-zero emissions before the international community.

Surviving A Climate Apocalypse in Belize