The students of Holy Cross Anglican School, located in San Mateo Area are facing some serious problems when accessing the school compound, especially in the early morning, as the entrance to the school is completely flooded. For the past few days there has been no rain, yet the entrance of the school campus has been constantly flooded. The cause of the sudden flooding has been attributed to the low terrain of the school and the increase in tidal activity. Despite initial assistance from the San Pedro Town Council (SPTC), more help is needed to alleviate the situation of the school that hosts over 400 hundred students, many from low-income families.

According to reports from the school’s principal Rodney Griffith, students and teachers are faced with quite a challenge accessing the school grounds as a huge pond of stagnant water covers the entrance to the school. “The students have had to literally walk through the water that covers all the area in front of the school entrance, or climb a fence and walk along it. There are some students that just go through it, and it’s a big Monday morning and students coming with their neat uniforms having to walk through water to get to school, is not something pleasant,” said Griffith. He mentioned that the reason for the flooding, according to what he has been hearing, is due to the high tides at this time, which seem to be higher than usual. One of the suggested ways to address the situation is by filling the area around the school and its entrance. “We are grateful for the six loads of sand that was given to us by the SPTC that filled the entrance of the school compound; however more is needed, especially in front of the school and the students’ playground area which is inundated.”The tidal phenomenon is a constant natural occurrence in this area of the island, but in the past months it has gotten worse, especially compared to past years. 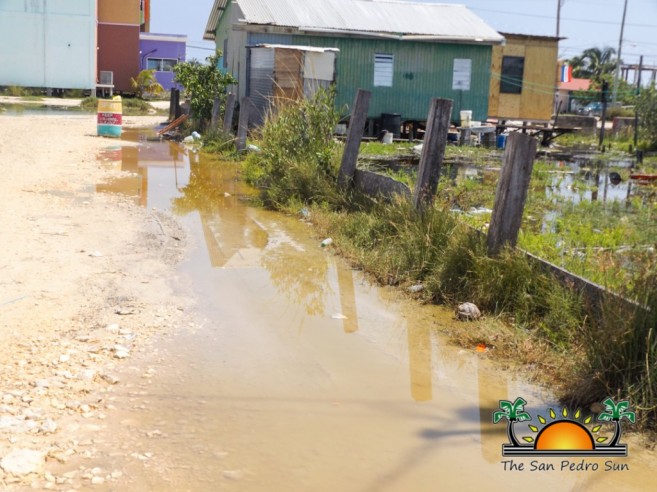 Another major concern for school administrators is the well-being and health of their students, since some of the septic waste from the neighbouring houses near the school is also affected with the rising tides. “The sewage water from the neighborhood is being lifted along with the tide, and it drains back into the school compound. We are aware that these areas are pretty low, but we also realize that the more you have the area filling up, the more sewage waste we have coming to the school,” elaborated Griffith. He went on to suggest that a short term solution is getting solid material to fill in the entrance to the school and more material (sand) to dump inside the school compound so it’s higher and suitable for the students. 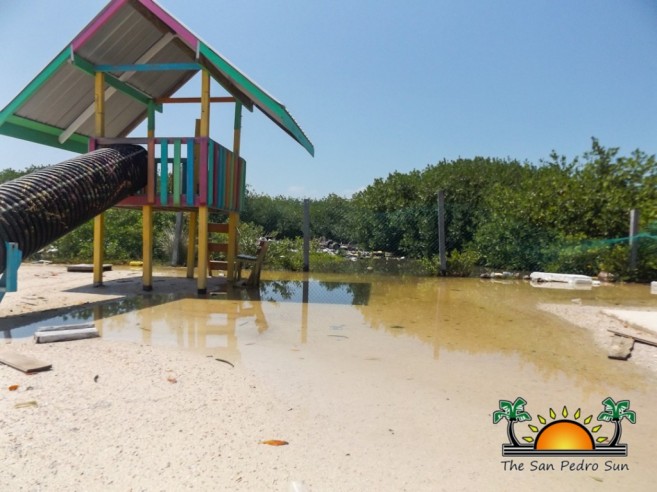 According to Griffith a letter was sent to the SPTC petitioning for help, which has yet to be answered. The San Pedro Sun contacted the SPTC regarding the matter, and was assured that they would look into the issue and render assistance as in previous occasions. However, SPTC’s administration did not make any further comments on any action plan to be taken to solve the situation at the school, since Mayor Daniel Guerrero was out of the country. Upon his return, the matter will be discussed with him to find ways to address the issue.

The school administration insists that the matter is urgent, and they are appealing to the local authorities for prompt assistance. Since the flooding began, students have not been able to fully enjoy the compound, including the school play ground.