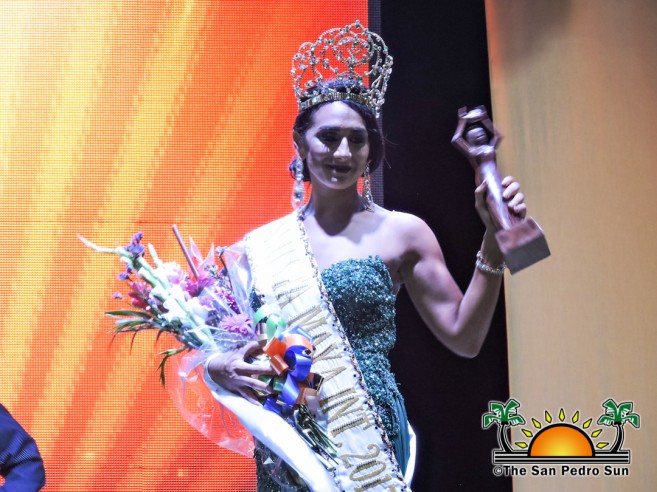 A night of beauty, glamour and cultural pride initiated the 2017 International Costa Maya Festival on Thursday, August 3rd at the Honorable Louis Sylvestre Sporting Complex. Eight lovely ladies representing the Central American countries and Mexico vied for the title of Reina de La Costa Maya 2017-18. At the end of the largest pageant held in Belize, it was Miss Belize’s Michelle Estrella Nuñez who charmed the judges and captured the crown and title. 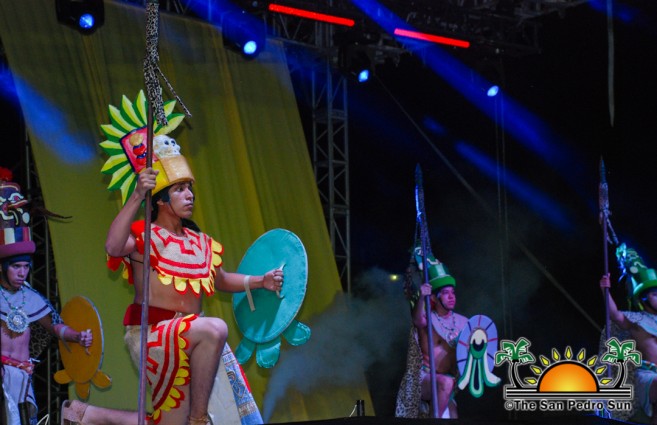 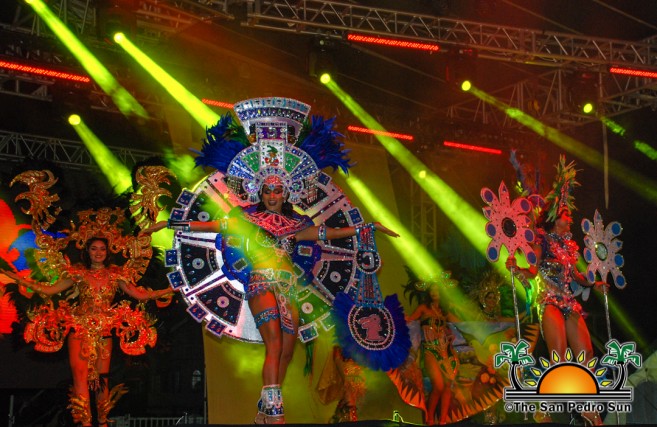 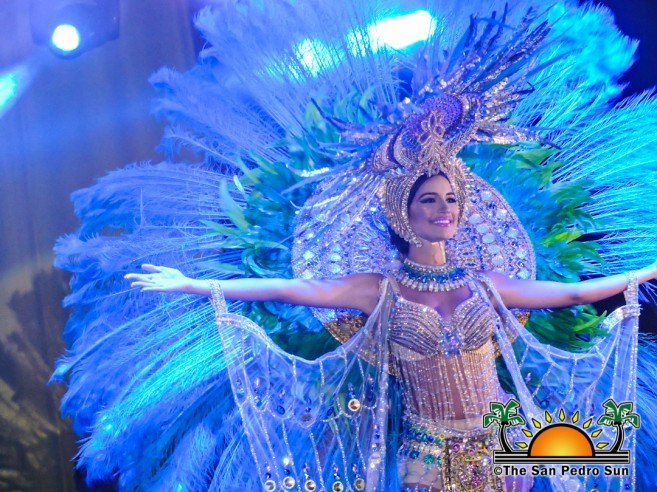 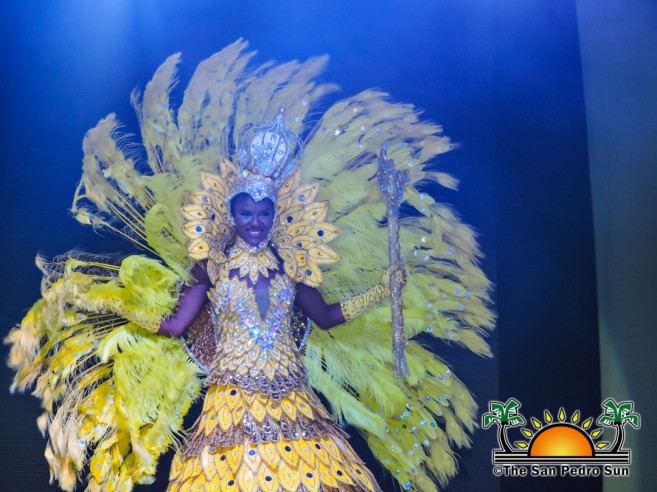 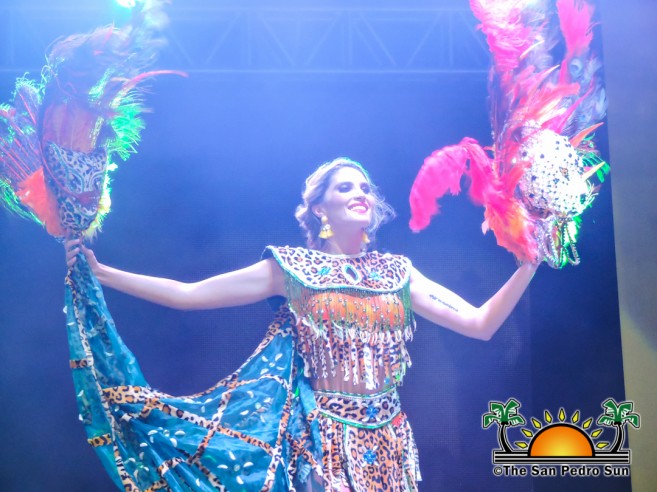 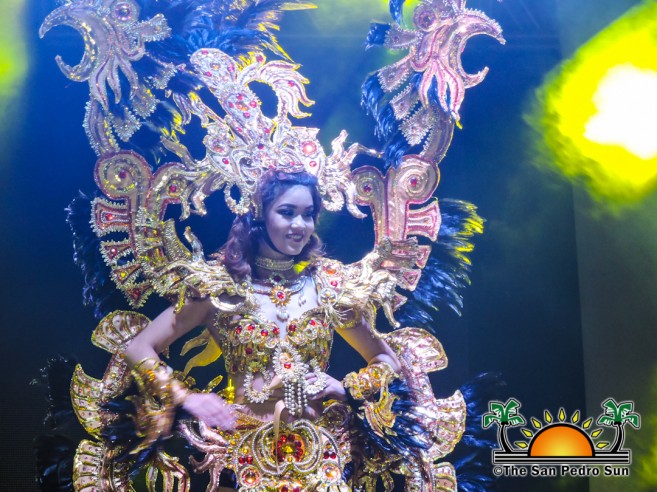 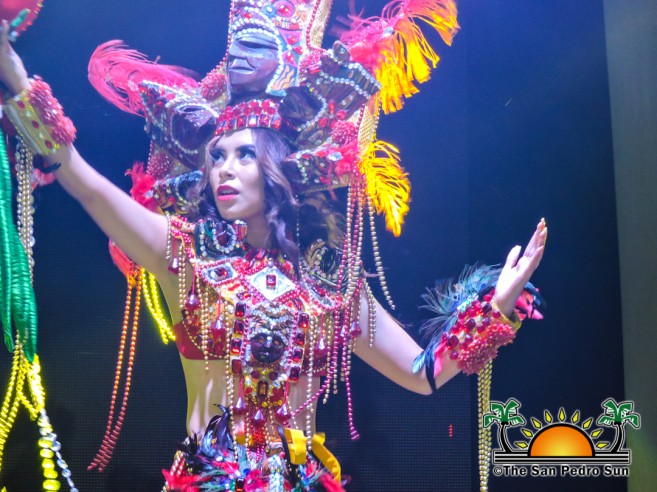 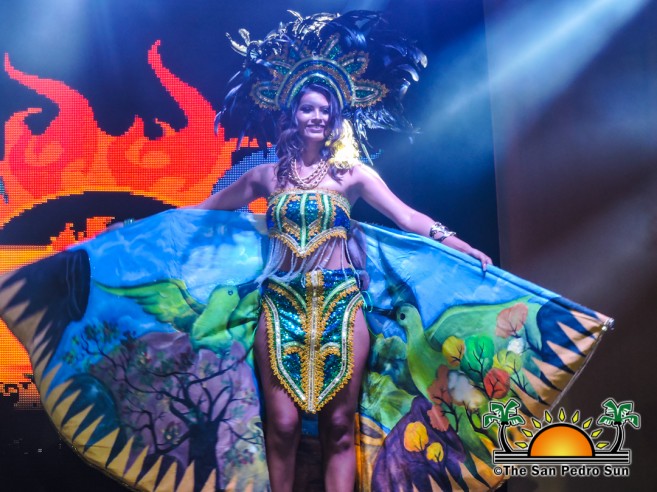 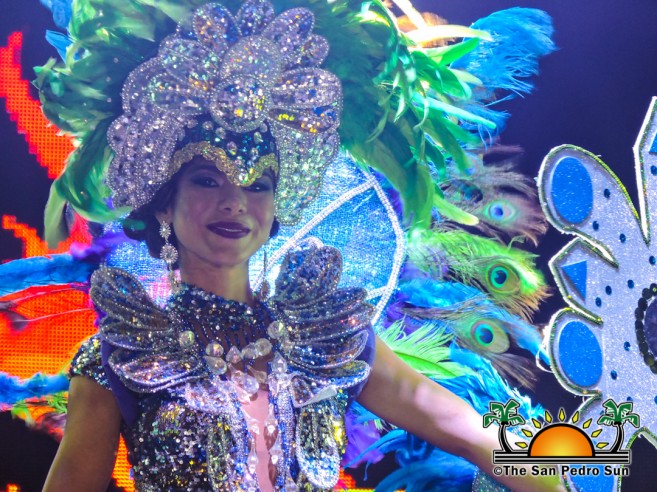 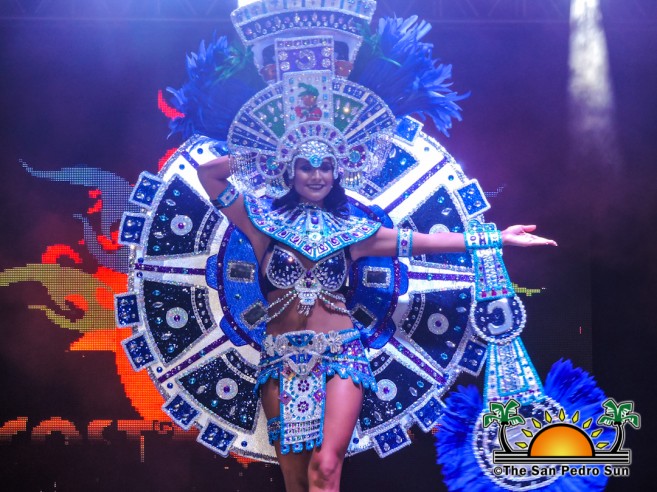 While the beauties retreated backstage to prepare for the next segment, the Ballet Folklorico de Quintana Roo performed for the crowd. With a routine demonstrating the rich Mestizo culture, the group surely kept the audience entertained. 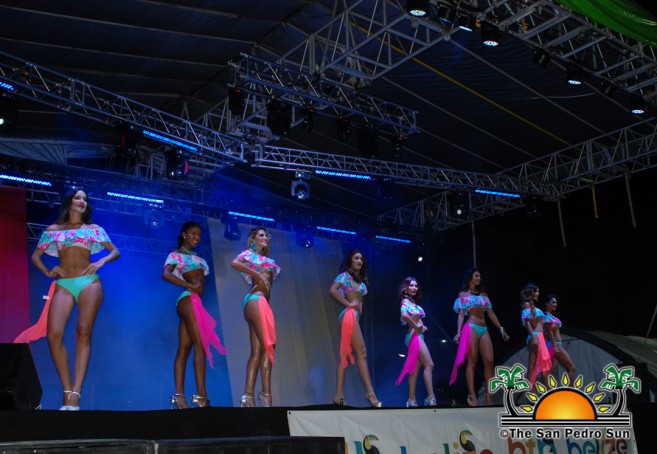 The next segment in the pageant was definitely another crowd favorite; the swimwear segment! Dressed in tropical swimwear, the delegates displayed both elegance and free spirit while onstage. Again, the judges had the difficult task of scoring the contestants during this segment of the program. 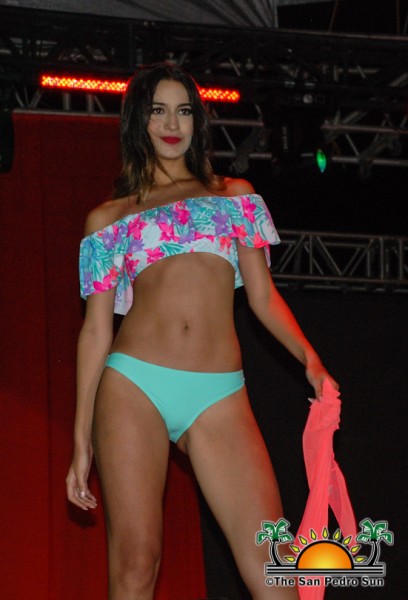 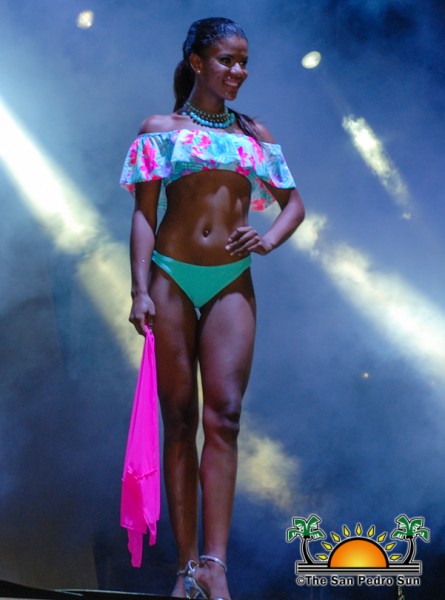 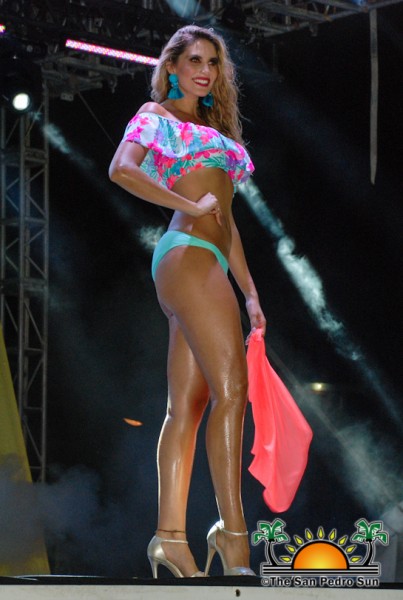 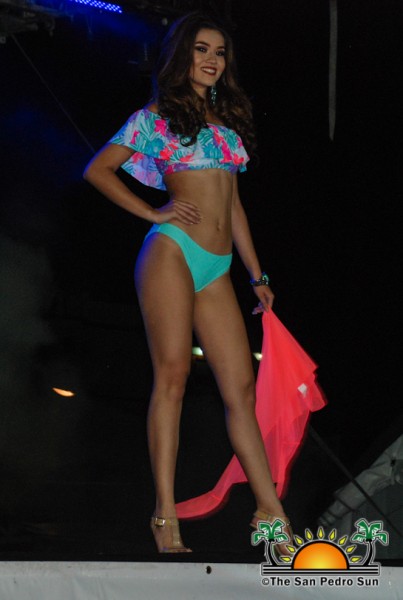 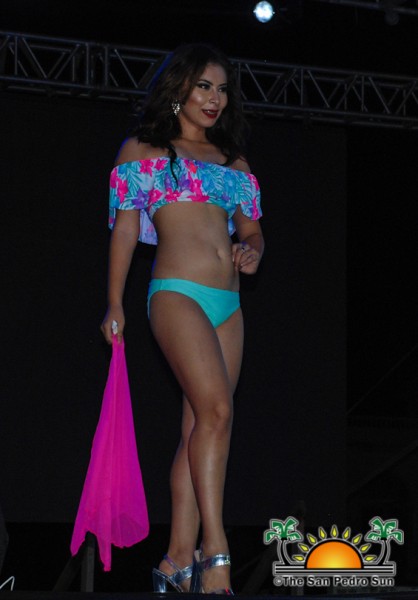 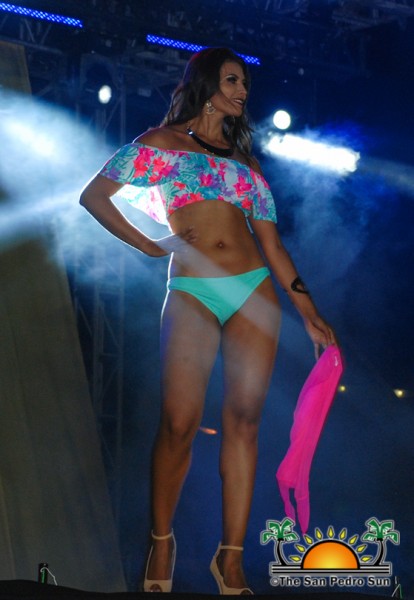 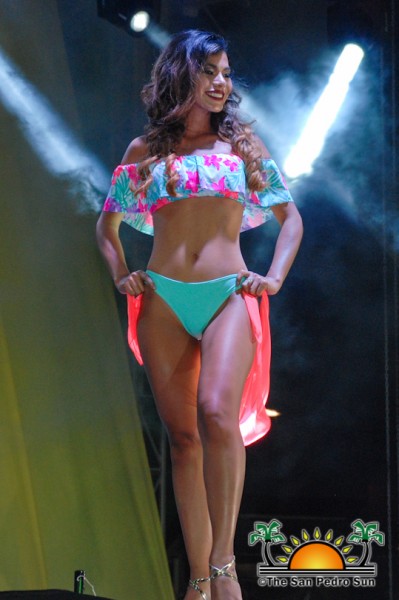 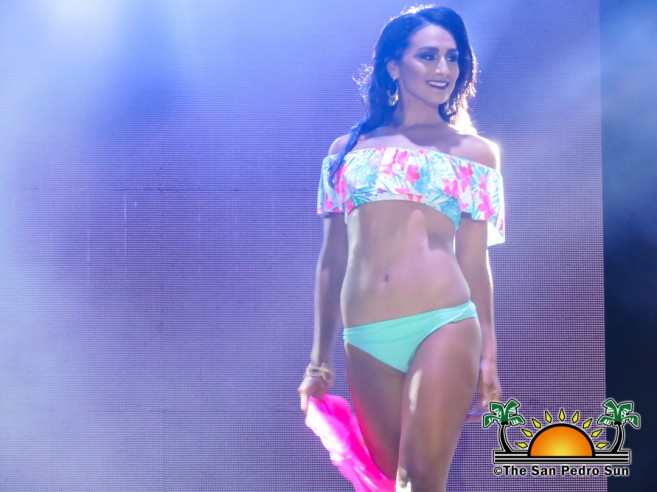 Upon their retreat from stage, the Ballet Folklorico de Quintana Roo presented dance routines once more, while the audience awaited the Evening Gown Segment. 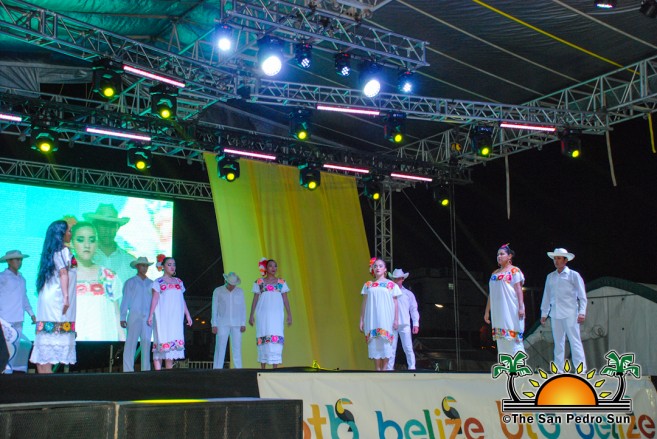 One by one, the eight beauties took the stage in stunningly elegant gowns. Demonstrating grace and beauty, each charmed the audience. 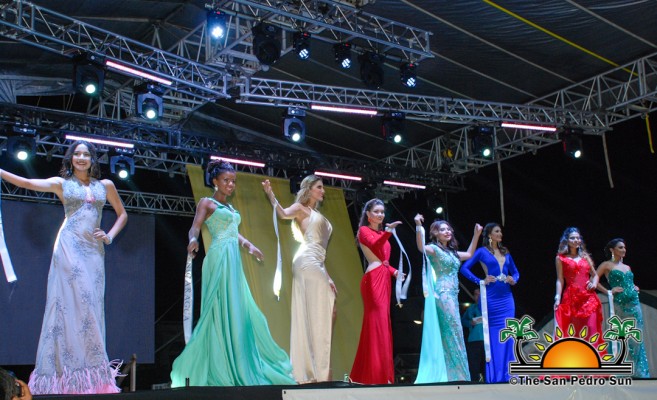 After each contestant had displayed their evening gowns, it was time for the most difficult segment of the night: the Question and Answer segment. Questions ranging from global issues to human rights, each delegate eloquently answered. As the ladies retreated, judges were tasked with selecting a winner.
Traditionally, during this time, the reigning Miss Costa Maya would deliver her farewell address. However, due to unforeseen circumstances 2015/2016 Reina de La Costa Maya Gabriela Vanessa Salazar Valle had to return home to Honduras. In her stead, Miss Belize’s contestant from last year’s (cancelled) pageant, Miss Yadira Argueta and former Miss Costa Maya 2000, El Salvador’s Sandra Glower Solis had the honors of crowning and sashing the winners.

Finally, the winner was announced, after a little bit of teasing from MC Eiden Salazar Jr.! Taking the 2017-2018 crown, title and honor of being Miss Costa Maya was Miss Belize Michelle Nuñez. The crowd erupted in applause and cheers as Michelle was crowned. 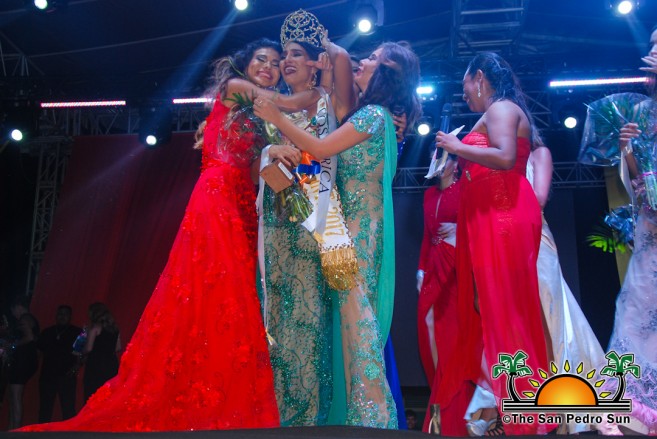 Immediately following the pageant, Caribbean Kings Band kicked off the after party. Attendees joined the newly crowned Reina de la Costa Maya and other delegates in the evening of celebration.
The San Pedro Sun congratulates Michelle on her win and wishes her a successful reign!

The International Costa Maya Festival continues on Friday, August 4th with the Opening Gala. Entertainment will be provided by Feliz LT of Panama, Grupo Yerbaklan of Honduras, Super G of Belize and Caribbean Soca Queen, Alison Hinds! The audience will also enjoy cultural presentations from El Salvador, Guatemala and Mexico throughout the night. International Night will be on Saturday, August 5th with entertainment from Grupo Crash from El Salvador; Stig da Artist, Larubeya and World Culture Band from Belize; and of course La Sonora Dinamita de Lucho Argain of Colombia. Sunday, August 6th will see an all-day beach party at Central Park as well as the Free Anniversary Fete with Gilharry 7 during the night. Gates open at 7PM all nights, with the show starting at 8PM.