Commissioner of Police (ComPol) Chester Williams, along with other senior members of the Belize Police Department began the 2020 Commissioner’s Country Tour in Caye Caulker Village and San Pedro Town on Thursday, February 6th. The tour included a visit to the police formations on the Cayes and meeting with Officer in Charge of the Coastal Executive Unit, Superintendent Christopher Noble. Later in the day, ComPol hosted a public meeting at the Angel Nuñez Auditorium in San Pedro Town. At 6PM, Williams addressed attendees, expressing his satisfaction on the decrease of crime on Ambergris Caye and informing islanders of the future plans the police department has for the island. 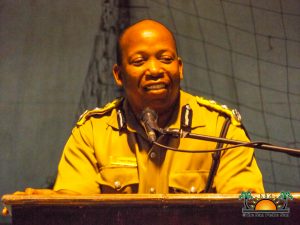 ComPol said that in the coming months, the local police formation will see additional police officers, security cameras will be installed in strategic areas around the island, and assured everyone at the meeting that police will continue working hard and enforcing the law for a safer Ambergris Caye. Williams was happy to announce that in 2019, major crime in San Pedro decreased by over 30%, something not seen in recent years. “We need to recognize the great work that Superintendent Noble has done on the island since he was posted here in July of 2019,” said Williams. “Moving forward, there will be challenges, but we should not make those challenges overtake us.” He explained some of the measures the police will take on the island to deter any illicit activities.

Williams stressed that vetting of such persons engaged in drug selling on the streets or along the beach with continue to be one of their main priorities. “We must ensure that these people do not operate in comfort,” he said. ComPol indicated that gangs and drug dealers tend to conduct their activities when allowed to do so. He stressed that their actions on the island will not be tolerated. 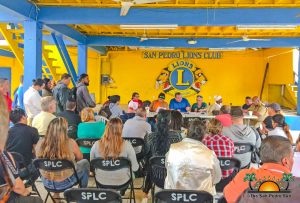 His presentation then touched on the issue of alcohol consumption on the island, including issues between the police and the liquor license board. ComPol stated that he understands that alcohol is a legal substance for sale, but emphasized that there needs to be a responsibility, especially if extensions are being granted for places to stay open after the legal business hours. “My instructions are that if the liquor license board issues an extension or a liquor license to a place that does not meet the legal guidelines, we will close it,” Williams said. He continued by saying that the police are the enforcers of the law, and when a liquor license is issued that does not comply with the law, the establishment will face the consequences. He added that every establishment should be operating under the regulations of its license. According to him, holding a receipt from the Town Council or the Chairman of the Liquor License Board for an extension to run a business after hours is not a license and the establishment can be closed if they are violating the law.

ComPol Williams is looking forward to increasing the police manpower on the island to 100 by the end of 2021. According to Superintendent Noble, there are currently 73 officers assigned to Ambergris Caye, by June of this year, 19 more will be assigned. ComPol stated that those police officers assigned to the island who do not have a place to stay will receive a living allowance of around $850 monthly. He briefly mentioned that this has become necessary in order to avoid letting officers stay in hotels, which left the police department with a six-figure debt at Pedro’s Inn. ComPol promised that they will settle that controversial bill via instalments. 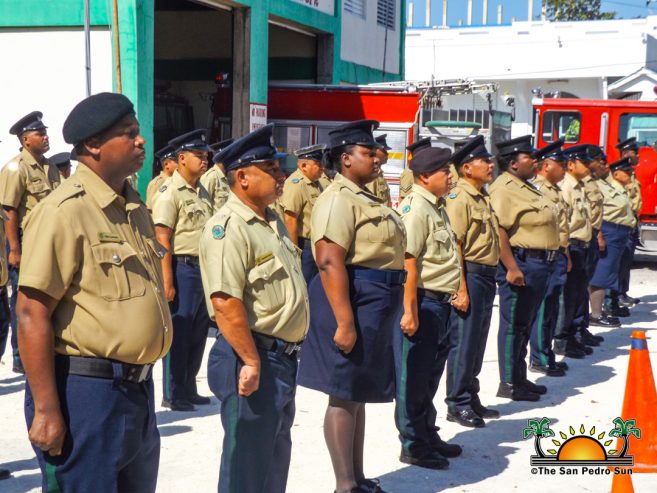 With the addition of more officers on Ambergris Caye, a broader coverage on the island is expected and officers will be able to respond to any situation within a short time. The plan aims to have patrols from south to north of town in order to have a strong presence and deter any potential criminal activities. The island police formation is also expecting to obtain a boat, so they can also conduct inspections around the coast jointly with the Belize Coast Guard from time to time.

In September 2019, the Belize Police Department acquired a set of cameras that will be installed in San Pedro. ComPol Williams said that the department is waiting on Belize Telecommunications Limited to start connecting the equipment. The cameras will be monitored from inside the San Pedro Police Station.

Noel Leal, Coordinator at Crime Stoppers Belize also gave a presentation about their services. He told the audience that any calls to them (922) are confidential and cannot be traced. Anyone can report a crime. Leal also spoke about their P3 Tips App, which can be downloaded to your smartphone and can be used everywhere in the world. “It’s very easy to get into, the procedures on how to use it are straight forward,” he said. Leal encouraged everyone to use the services of Crime Stoppers Belize whenever they see a crime taking place.

Crime Stoppers’ Chairlady Lauren Smith joined Leal encouraging everyone to take advantage of the service to help police solve a crime by providing them with vital information. “It takes the community to join together to fight crime,” said Smith. 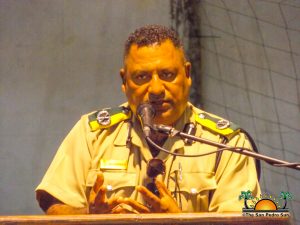 Before the presentations wrapped up, head of Community Policing countrywide, Aaron Guzman, shared a few words with the attendees. He stressed on the importance of police and the community working together. He agreed with Smith that teamwork is the best weapon against crime in any municipality around the country, and the community policing unit of the police will continue engaging the public to foster a strong working relationship.

At the end of the meeting, there was a short question and answer session. Attendees left the meeting satisfied with the work police have done on the islands so far and they look forward to even less crime in 2020.