Hundreds of business owners attended the annual Liquor Licensing Board meeting at the San Pedro Lions Den on Monday, January 6th to renew their liquor licenses. For many, it was a swift routine renewal, while others were notified about certain regulations, they must adhere to in order to enjoy the privilege of having a liquor license. The license applications were reviewed before approval by members of the San Pedro Liquor Board, comprised of Eiden Salazar Jr as Chairman, Vanessa Parham as Vice Chairlady, along with members Joseph Elijio and Carlos Barrientos. The board also counts with ex-Office members from The San Pedro Town Council (Councilor Ruben Gonzalez) and the Health, Police and Fire Department. Following the meetings, the licencing board commented on concerns regarding the enforcement of regulations governing the said licenses, and how they will deal with this matter in 2020. 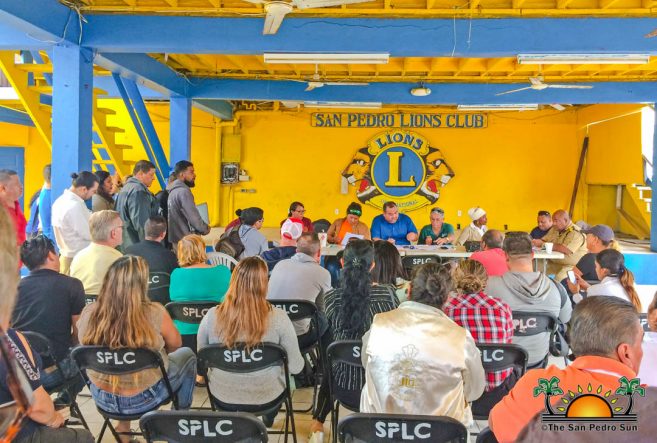 One of the issues brought up to the liquor board were reports of grocery store/shops selling alcohol after 9PM, when they are supposed to be closed. The Substantive Laws of Belize Chapter 287, under the ‘Shops’ section, states that ‘no shops shall be open for the serving of customers except between the house of six o’clock in the morning and nine o’clock in the evening on any one day.’ Another complaint is the alleged drinking that takes place outside of these shops, which again, is not permitted under the law. The island liquor board addressed this issue, stating it has been agreed upon that all shops will abide by the laws and close by 9PM. Those shops wanting to stay open beyond this time will need to adhere to the liquor and police laws. They also indicated that certain shops could stay open after 9PM and sell alcohol under a Convenience Store License. No consumption of alcohol outside of shops is permitted and the liquor board said that they will be exercising more checks and ensuring that businesses are adhering to these laws. They claim to have the full support of the San Pedro Police formation, which is said to be assisting with a ground patrol strategy.
The San Pedro Liquor Board did not provide much detail on the process of obtaining nightclub licenses. They could not explain how one island resident, who has been involved in two armed felonies, is now running a night club. He reportedly shot at a banker and recently in October 2019 shot a bartender inside a nightclub. He was charged for Attempted Murder, remanded, but, after a couple of days, was released from prison and now runs a nightclub in downtown San Pedro. According to the law governing liquor licensing in Belize, Chapter 150, Article 50 states; ‘Every license holder who is convicted of any offense under this Act may, on a second conviction within two years after a first conviction, be adjudged, in addition to any fine or penalty imposed by this Act, to forfeit his license, and immediately on such adjudication, the defendant shall deliver the license theretofore held by him to the magistrate and on his failure to do so, he shall be liable to a fine of fifty dollars for every day that he fails to deliver the license to the magistrate.’
Nightclubs must count with more than one fire exit, ample parking areas and no blockage of streets impeding the access to emergency vehicles (fire department/police). Soundproofing has also become an issue in some places, along with safety and the increase in fights in certain establishments. These issues were not directly addressed by the liquor board, but they claim to have new measures to enforce and uphold the laws which will address any matter that becomes a nuisance to the public.
In the meantime, stakeholders are asked to work along with the local authorities, respect the regulations and promote a safer business environment on the island.