Fuel prices, the referendum to take the Belize-Guatemala territorial dispute to the International Court of Justice, voter re-registration and who will succeed him as United Democratic Party leader going into the 2020 general elections were some of the hot topics Prime Minister Hon. Dean Barrow discussed at a press briefing held at the Belize Best Western Biltmore Plaza Hotel in Belize City on Wednesday morning, May 16th. 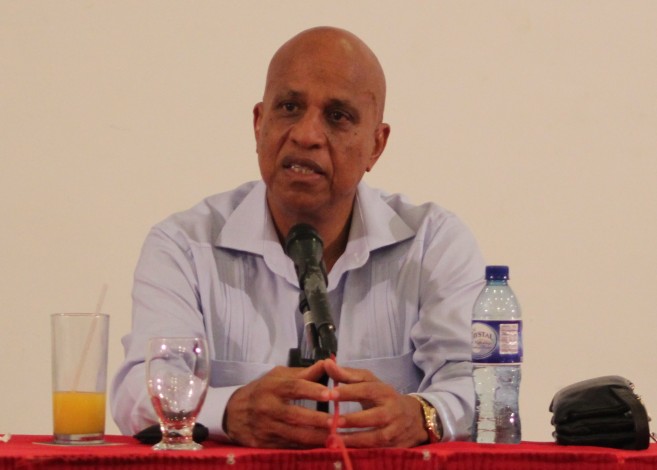 With fuel prices going up at midnight that same day, Barrow said the new prices at the pump are beyond the government’s control since the world price of oil is rising. He noted that the political situation in Venezuela and the economic and trade sanctions imposed on Venezuela has caused Belize to purchase fuel elsewhere, under not so favorable terms as existed under the PetroCaribe agreement with Venezuela. The situation in Iran, the third largest oil producer in OPEC (Organization of Petroleum Exporting Countries), is also causing lowered oil production, with the demand causing world oil prices to rise. Barrow said it was the “perfect cocktail” for world oil prices to go to US$100 per barrel, a circumstance that was totally outside the control of a small nation like Belize.
Barrow also made it clear that there is no way the government can lower its take on the taxes on imported fuel, as even a .10-cents per gallon reduction in tax would result in a $2 -$3 million shortfall in the government budget. He declared this is not just pious rhetoric, as the government has been working with the importer, PUMA, to get the best price from new sources. John Mencias, of ALBA- PetroCaribe, whom the media has described as Belize’s “oil czar”, explained that Puma is now buying fuel from Texas, U.S.A. with which it supplies all its customers throughout the Caribbean and Central America.
The new prices for Premium Gasoline – $11.36 per gallon – down by .3 cents; Regular Gasoline – $11.14 per gallon – up by .10 cents, Diesel Oil – $10.60 per gallon – up by .11 cents, Kerosene – $7.75 per gallon – down by .12 cents.
Barrow also discussed the successful completion of the Guatemalan referendum, with a YES vote to take its territorial dispute with Belize, to the International Court of Justice (ICJ) for final settlement. He said the date has already been set for Belize’s own referendum, and he will also be recommending that Belizeans vote YES, on Wednesday, April 10, 2019. He said the government has budgeted $2.5 million so far for a public education campaign to inform Belizeans about the issues they will be voting for, and why it should be a YES.
He noted that Government has also budgeted $8 million for the Re-registration exercise to create a new Voters’ List, which he hoped would be ready well before the Referendum and the 2020 General elections.
Barrow also clarified that he has had to make several trips abroad recently, mainly for health reasons, primarily his aching back, though he said he wishes to avoid surgery for as long as possible.
Other issues raised was the matter of Guatemalans legally residing in Belize seeking Belizean citizenship, the separation of the Nationality Department from the Immigration Department under different ministries, and how the government of Belize proposes to pay – or not – the various judgments and court rulings which the attorneys of the Ashcroft Alliance have won in U.S. court and at the Caribbean Court of Justice. On some of these matters, P.M. Barrow deferred to Financial Secretary Joseph Waight to answer. Waight said Belize has very few assets in the United States against which the Ashcroft attorneys might seek to enforce a judgment.