The United Nations Subcommittee on Prevention of Torture (SPT) made its first visit to Belize from Monday, April 22nd through to Friday, April 27th. After their visit to the country, UN experts stated that Belize must establish an independent National Preventive Mechanism (NPM) to avert and deter torture and ill-treatment of people deprived of their liberty.
According to the Head of SPT Secretariat, these are standard visits, per an established annual programme of visits, and therefore not triggered by any specific issues but in general preventive work to monitor places of detention and to assist the governments to establish its NPM. The SPT Secretariat further stated that the Government of Belize (GOB) is overdue in establishing the NPM and the SPT visited to advise them on the establishment.

During their time in Belize, the SPT visited the central prison, various police stations throughout the country, and a juvenile institution where members of the delegation freely interviewed staff as well as people in detention. The SPT delegation also met with members of civil society and held meetings with government ministers, the Chief Justice, and the Ombudsman. “Belize should strive to establish a national preventive body as soon as possible, ensuring that it is functionally independent, adequately resourced and mandated to carry out unannounced visits to places where people are deprived of liberty,” said Sir Malcolm Evans, who headed the SPT delegation. “When the national preventive mechanism is established, it will help the authorities improve the conditions of detention and ensure an effective policy for preventing torture and ill-treatment in the country.” 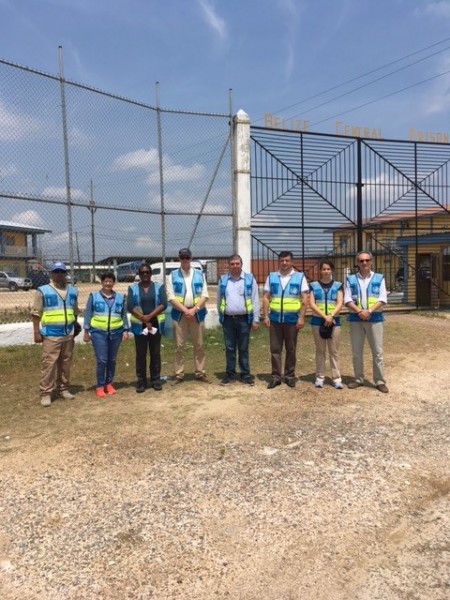 Head of the SPT Secretariat believes that the establishment of NPM will be beneficial to the country, stating “The establishment of an independent NPM, with appropriate resources and mandate, will assist the country to better respect its obligation under the Convention against Torture; that is to prevent torture and ill-treatment as well as to improve the condition of detention”. Once NPM is established it will be able to visit at any time, any places of detention, and to have confidential interviews with all persons in detention. It will also raise concerns with the GOB on these issues and share recommendations on how to improve the situation.
An NPM is an independent national body with the power to regularly examine the treatment of persons deprived of their liberty in places of detention and to subsequently make recommendations to the authorities. States party to the Optional Protocol to the Convention against Torture and other Cruel, Inhuman or Degrading Treatment or Punishment (OPCAT), which Belize acceded to in 2015, must establish such a mechanism within a year of ratification. The SPT will produce a confidential report containing its observations and recommendations which it will share with the Government of Belize, and encourage the government to make the report public. The SPT Delegation was composed of the following members: Arman Danielyan (Armenia), June Lopez (Philippines), Aisha Shujune Muhammad (Maldives) and Victor Zaharia (Republic of Moldova).
The Optional Protocol to the Convention against Torture and other Cruel, Inhuman or Degrading Treatment or Punishment has been ratified in 87 countries. The SPT’s work is guided by the principles of confidentiality and cooperation, which is composed of 25 independent and impartial experts from different regions of the world. For more information on the SPT and the work they do you can visit their website at http://www.ohchr.org/EN/HRBodies/OPCAT/Pages/NationalPreventiveMechanisms.aspx