Press Release – Attorney General’s Ministry – September 15, 2017 – Since acceding to the United Nations Convention against Corruption (UNCAC) on the 12th of December, 2016, significant preliminary steps have been taken towards implementation. The Government of Belize through the Attorney General’s Ministry, the designated Focal Point for UNCAC, has made a concerted and devoted effort to assess the legal and institutional framework in Belize, with the aim of identifying and strengthening anti-corruption regimes in Belize. 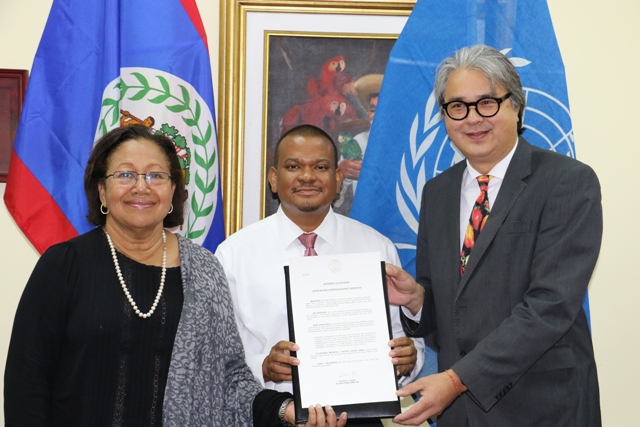 Contextually, Belize is considered as a country with an economy in transition, as such, any plans and programmes to combat corruption has to be measured in line with Belize’s capacity financially, technically and otherwise. Nevertheless, the Government of Belize on a voluntary basis has subjected Belize to the implementation review mechanism established by the Conference of the State Parties to review and monitor implementation of the UNCAC (the Mechanism). The Mechanism includes a review process that is intergovernmental in nature.

The review process is conducted in two review cycles based on a timetable, which is set and controlled by the Secretariat of the Conference of State Parties, which is also the Secretariat of the Mechanism. The First Cycle involves an assessment of the legislative and institutional framework of Belize in relation to Chapters III (Criminalization and law enforcement) and IV (International cooperation); and the Second Cycle likewise in relation to Chapter II (Preventative Measures) and V (Asset Recovery). Each review cycle includes: the submission of a Comprehensive Self-assessment Checklist; a desk review of the Self-assessment Checklist by the Reviewing States; and an optional country visit by the governmental experts of the Reviewing States. It is worthwhile to highlight that participation in the Mechanism is not mandatory for State Parties.

The Mechanism will technically assist Belize in the effective implementation of the UNCAC. It is capable of assisting us in identifying and providing solutions at the earliest possible stage to counter difficulties that will be encountered in the fulfilment of our obligations under the UNCAC. Additionally, the Mechanism promotes cooperation amongst States and facilitates the sharing of expertise and good practices. More importantly, the Mechanism takes into account the level of development of States and is an ongoing and gradual process.

Accordingly, a strategic and time-sensitive approach has been employed by the Government to enable Belize to implement the necessary reforms to our legal and institutional framework in line with the time-table set by the Mechanism.

Under the auspices of the Government of Belize, through the Attorney General’s Ministry (the Focal Point), United Nations Development Project (UNDP) and United Nation Office on Drugs and Crime (UNODC), the following steps have been taken towards implementation of the UNCAC, since accession in December 2016:

1. In February 2017, the project “Strengthening National Systems to Support UNCAC Implementation in Belize” (SNS4UNCAC) was initiated, as a partnership between the Government of Belize, inclusive representatives of various branches of Government, UNDP, UNODC and the stakeholders of civil society, inclusive of a representative from the opposition, the NGO community and a representative from the NTUCB. The Project Board is tasked, amongst other things, with assessing and identifying where national capacities are lacking and to create an action plan for the effective implementation of the UNCAC. The board conducts regular meetings to plan and evaluate its objectives and is in the ultimate stages of approving a rigorous public information and advocacy campaign in an effort to address the embedded cultural acceptance of corruption. This partnership is confirmation that it is the Government’s priority to streamline our legislative and institutional frameworks to satisfy the international anti-corruption standards set out in the provisions of the UNCAC.

2. On the 3rd and 4th of May 2017, a two day training workshop entitled “Implementation Review Mechanism of the United Nations Convention against Corruption (UNCAC) Training in Belize” was held at the Inspiration Centre, George Price Highway, Belize City where members of the Project Board and other stakeholders of civil society were given introductory training on the provisions of the UNCAC and what is required for implementation. This demonstrates Government’s commitment to specific training programmes to ensure its personnel responsible for preventing and combating corruption is equipped with the knowledge to effectively execute its obligations under the UNCAC.

3. On the 24th of May 2017, two Governmental Experts from the Attorney General’s Ministry participated in the Basic Training Programme in Public Procurement facilitated by a joint effort of the European Union and CARIFORUM held at the Biltmore Hotel, Philip Goldson Highway, Belize City, where the participants were given a general sensitization and awareness training to facilitate a wider understanding of public procurement, its value to society as a whole and its potential development impact through international trade. This is indicative of the Government’s efforts towards capacity building in the areas of competition, public procurement and customs and trade facilitation.

4. In June 2017, the Focal Point, the Honourable Attorney General of Belize, Michael Peyrefitte and a Governmental Expert from his Ministry participated in a training programme for Focal Points and governmental experts participating in the Review Mechanism for the UNCAC, at the Vienna International Centre, Vienna, Austria from 14th – 23rd of June 2017. The focus of the training was on the methodology, key concepts and guiding principles in the implementation review process. Further, there was sensitization on the Comprehensive self-assessment checklist that will support the development of a national anti-corruption Implementation Plan.

5. On the 16th of June 2017 to initiate the implementation of the UNCAC, Belize was selected, by the drawing of lots, as a State Party to be reviewed in the First Cycle, since we are the most recent State to accede to the UNCAC. We are to be reviewed by Haiti from the regional group and Tuvalu from the international group. Noteworthy, a State Party selected to be reviewed in any given year may, with reasonable justification, defer participation to the following year of the review cycle. However, Belize has taken a proactive approach and did not exercise its deferral option.

6. The review process commenced on the 25th of July 2017 and over the last month and a half the governmental experts at the Attorney General’s Ministry have been engaged in a rigorous analysis of the legal and institutional framework of Belize with the aim of completing the Self-assessment Checklist and submitting it to the Secretariat on the due date of the 25th of September 2017. Within three months of the submission of the Self-assessment Checklist, in December 2017, a desk review will be conducted, and two months after, in February of 2018, there will be a country visit to Belize by governmental experts from Haiti and Tuvalu.

7. A “South-South” exchange scheduled for the 12th – 16th of September 2017 with Jamaica was organised by the Project Board and facilitated through the UNDP to allow Belize to examine the legal and institutional framework of Jamaica and its best practices in the context of its anti-corruption regime; however, due to the unpredictable forces of nature and the devastation caused in Miami by Hurricane Irma the exchange was postponed to the 24th – 28th of September 2017.

In conclusion, the Government of Belize has made several successful steps towards the implementation of the UNCAC. Although a large portion of the work is foundational in nature, it is essential if we are to effectively execute our obligations under the UNCAC. The Government remains committed to combating corruption at any level it may exist, and affirms that the proper implementation of UNCAC is a priority at this time.