On Saturday November 12th, the 2011 Belize Optimist Class National Championship Regatta for sailors ages 8 to 14 was held in San Pedro. A first for San Pedro, it was an honour for the San Pedro Sailing Club to host the regatta where 38 children from around Belize participated. Chosen by their trainers and invited to sail in the National Championship Regatta, these young sailors rose to the occasion during a challenging day-long competition.
Each race consisted of two qualifying laps around a regulation Olympic triangular course.

With only 19 boats available, the 38 participants were divided into two groups. The skippers were assigned to one of the two qualifying races. At the completion of both qualifiers there were nine top finishers in each and in order to fill the 19th boat, there was a tenth finisher in the second qualifier with the fastest time. 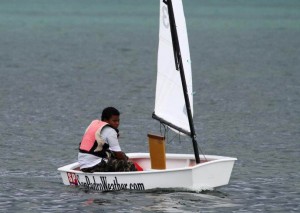 After surviving the qualifier, the top skippers challenged one-another to five more races. Each race was scored and the worst finish for each skipper was tossed out, with only his or her best four races counted. These young skippers demonstrated unfailing determination and endurance and sailed under grey skies, in chop seas, and in the face of gusting, variable, winds that became very strong for the last two races. Some skippers, who placed well in the early races encountered fatigue, faced difficulty concentrating in the late going and lost their edge, while underdogs rose to the challenge.

Heart is what all of these sailors showed the crowd, and at the end of the day, four of them showed endurance as well as especially fine seamanship and sailing skills. Although he finished out of the trophy places, Sea Scout Joshua Potts, skippering boat 25, missed third place by only one point, while outdistancing his nearest competitor for fourth by a full 11 points. It was another Sea Scout, Joshua McKenzie, in boat 25, who edged Josh Potts out to win the third place trophy. Only four points separated Joshua McKenzie from the Second Place finisher, San Pedro Permit team leader David Puc in boat 3, Palo Alto.

Alexander Rhaburn, age 11, of Holy Cross Anglican School, San Pedro sailed to a very quiet and very efficient racing-clinic victory winning the Belize Optimist Class 2011 National Champion. His final score was two points less than perfect, and that is no easy feat. His coaches say, “Hmmm….he was our dark horse.” Alexander sailed to victory in boat 23 sponsored by San Pedro Weather.com. In his best four races he took a very convincing three Firsts and a Third.

The San Pedro Sun would like to not only congratulate all 38 sailors in this impressive feat but applaud the efforts to all those who have worked so hard in establishing the San Pedro Sailing Club. The opportunity provided to our youth is truly admirable and community efforts like this to involve youth and family in wholesome activities is commendable!