The San Pedro Seadogs played their first home game at the Ambergris Stadium on Sunday April 1st, to a stadium of about 200 spectators. The Seadogs played an intense game against FC Belize that ended in a nil-nil draw. 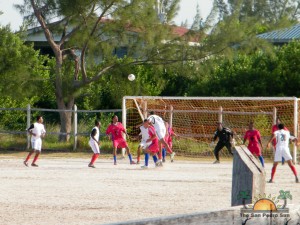 San Pedro had many opportunities to score but for some reason, just couldn’t seem to get a goal in. At the end of the game, they remained at fifth place in the Zone A standing while FC Belize takes second.

Sunday April 8th, Easter Sunday the San Pedro Seadogs will go up against Juventus in the second to last game in this leg of the Premier League Football Tournament.

Team Captain, Kent “Bob” Gabourel, spoke of the Sunday’s game, “This game, we had a weakness in the forward position, they couldn’t capitalize out there. This week coming we have to start training harder, putting in more hours. Some of the players were slacking off. We are working on more dedication and preparing mentally as well for the next two games.”

With Sunday’s draw, the Seadogs have now only to finish the tournament as they can no longer qualify to move onto the second round of competition. The winning team from the Premier League Football Tournament will move on to represent Belize in the up coming Confederation of North, Central American and Caribbean Association Football games.

Fans would have preferred a win but were happy with the draw, stating that they thought it was a good game all in.

The Seadogs would like to thank Mrs. Susana Eiley and Billy Leslie, the supporters that came out and everyone that continually supports the Seadogs.The team has two more games to play which will both be played here on the island on April 8th and 15th at 2:30pm. Bring the family out and show your support. There are lots of food and drinks on sale.

SAGA: How to Be a Good Dog Owner and a Great Neighbour5 Photos