After two days of grueling conditions and a close fight to the finish line, Carlos Ramirez and James Alford of Team ‘Hole Mi Tite’ took the first place win at the 11th Annual Lagoon Reef Eco-challenge. The boys, sponsored by The Environmental Defense Fund, conquered the 42 mile race in record time, earning them the coveted first place trophy and prizes. This year’s Eco-challenge kicked off on Saturday, May 23rd and finished on Sunday, May 24th. Not only did the race see the highest number of participants, but it also recorded the best overall times. Aimed at raising awareness on the importance of conserving the island’s fragile marine ecosystem, the kayak race offers a unique experience to all participants. 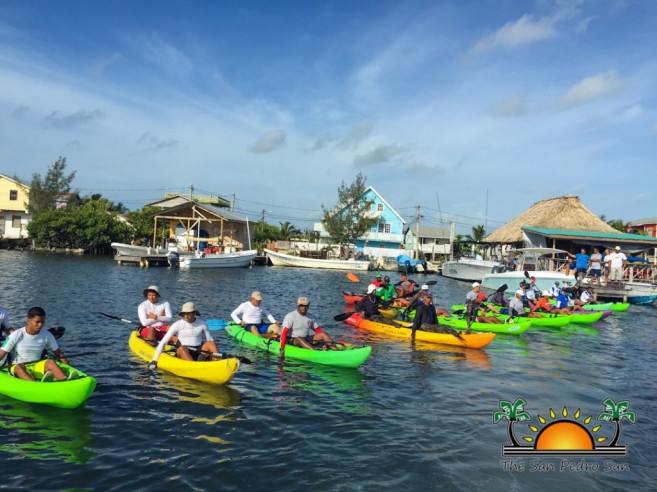 The 27 registered teams gathered at the Seaduced by Belize dock on the Sunset Boardwalk. Under calm water conditions, paddlers took off at 7:45AM, darting towards the north-western coast of Ambergris Caye. Spectators flocked the neighboring docks cheering on their favorite teams. 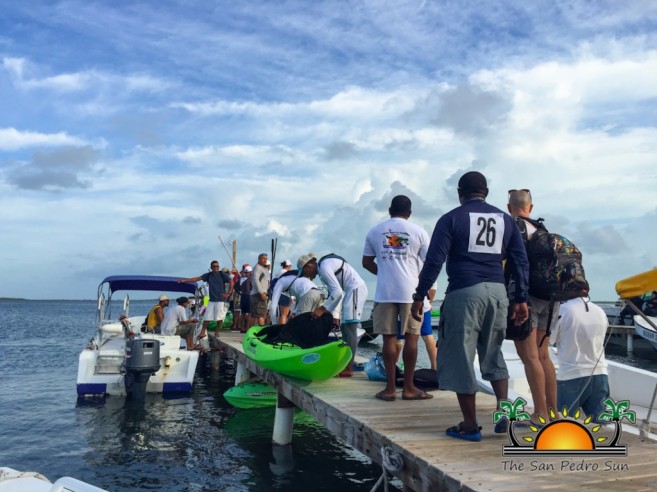 The first day of the race consisted of 25 miles through the mangrove channels in the lagoons of San Pedro. A designated route was mapped for the kayakers to follow, boats were stationed at the opening of several channels to provide water and supplements to the racers, or to assist them with equipment. A slight confusion arose in the Brasilete Area, as paddlers strayed from the assigned path and were forced to carry their kayaks across a mangrove patch and back into open waters. 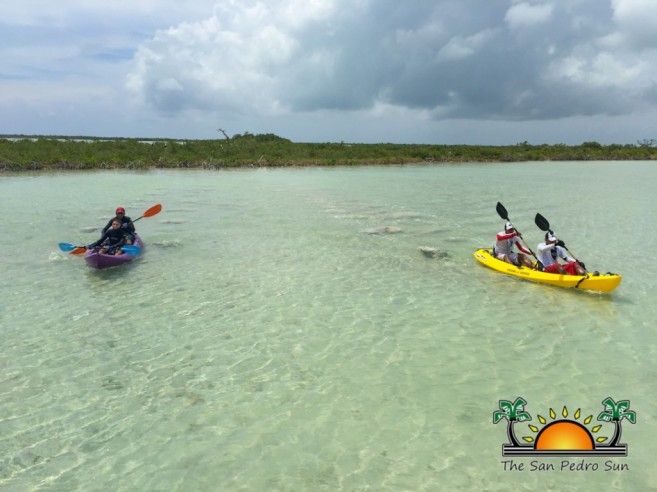 Once into the Laguna de Cayo Frances, the kayakers picked up speed as they hit deeper waters. Halfway through the race, Team ‘Cool Riders’, comprised of Victor Hernandez and Jesse Smith, was the first to drop out due to medical reasons. 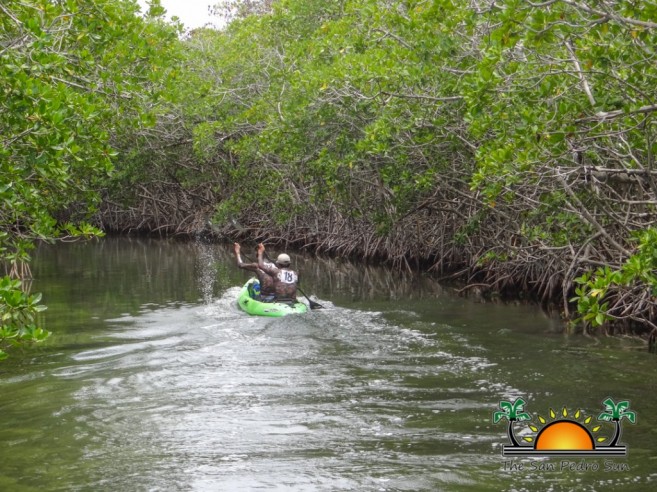 The race continued as far north along the Belize-Mexico border in the Bacalar Chico Area and then into the Laguna de Cantena. At this point, paddlers were once again forced to carry their kayaks across a muddy mangrove area that opens to the eastern side of the island. Kayakers made a final sprint across the clear water between the Basil Jones Area and the Belize Barrier Reef to the camp site and finish line of the first race day at the Robles Point Beach. Team ‘Hole Mi Tite’ were first to cross the finish line with a time of 6:30:42 (hours:minutes:seconds). Daniel Gregorio and Alfonso Lind of Team ‘BCG Boys’, sponsored by the Belize Coast Guard, made it in second place with a time of 6:40:51. In third place was Team ‘Bull Dogs’, Jimmy Polonio and Roy Bradley, sponsored by The San Pedro Sun and Belize Pro Divers. Charles Garay and Arden Garay of Team ‘2G’, sponsored by Captain Morgan’s Retreat finished in fourth, while Jesus Linarez and Jason Trapp of Team ‘Green House Boys’, sponsored by The Green House, took fifth place. 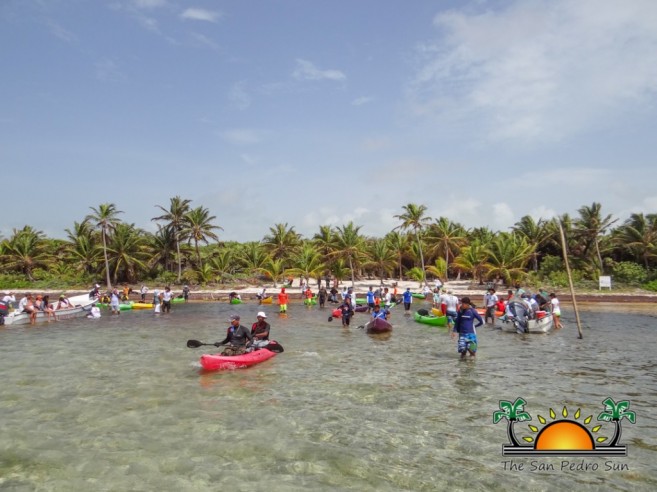 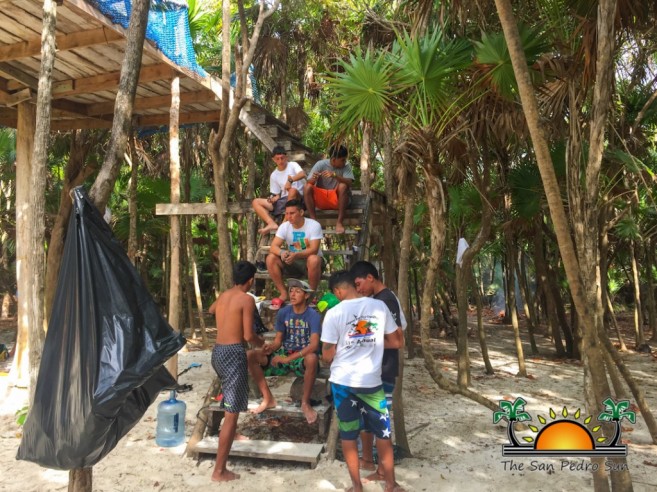 According to race organizer, Elito Arceo, this is the fastest time the first leg of the race has ever been finished in. “We had no major obstacle in the first day. We started a bit late, but surprisingly the first kayakers finished in record time. Usually the paddlers don’t start coming in until after 3PM but this year, the first kayakers came in around 1:30PM,” said Arceo. Some kayakers spent the night camping on the beach, while others came back to town for the night. 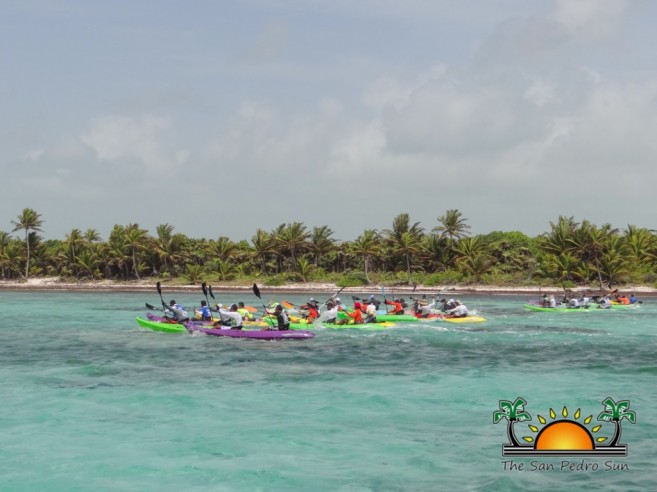 On Sunday, kayakers took off at 10AM for the second day of the challenge: a 17 mile journey from Robles Point to Central Park on the eastern side of Ambergris Caye. In moderate sea conditions, 24 teams sprinted to the finish line. Spectators had lined up at the docks along the route to get a glimpse of the kayakers as they passed cheering them on. Team ‘Hole Mi Tite’ and ‘BCG Boys’ were in a neck to neck battle for first and second place for the majority of the race. 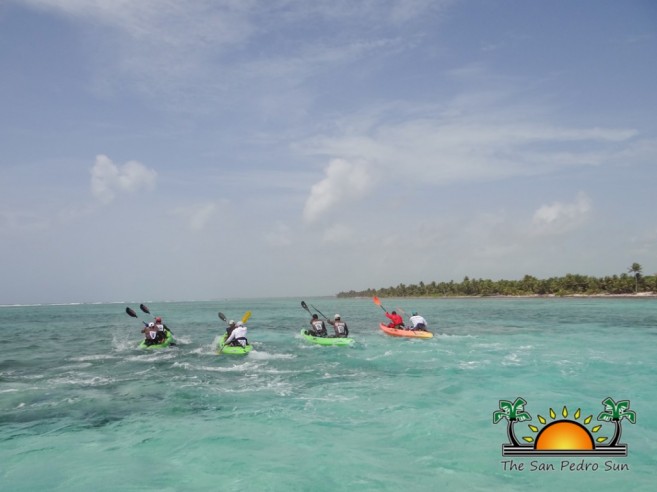 Other top finishers included: Charles and Arden Garay of Team 2G in fourth, Jesus Linarez and Jason Trapp of Team Green House Boys in fifth place, Cesar Salazarand Tony High of Team Venice Granddlers in sixth place, Jesus Castillo and Irvin Humes of Team Venecia Del Caribe in seventh, Will Lima and Adolfo Ayuso of Team Tiki Turtle in eight, Emir Recinos and Chris Rodriguez of Team Reef Boys in ninth, and Jason Chee and Lionel Cornejo of Team Chef Jennie’s Paddlers in tenth. The Dog Tired Award was given Team ‘Cool Riders’, while the MVP Award went to the youngest paddlers to complete the race, Carlos Esquivel and Miguel Castillo of Team ‘We Them Boys’. 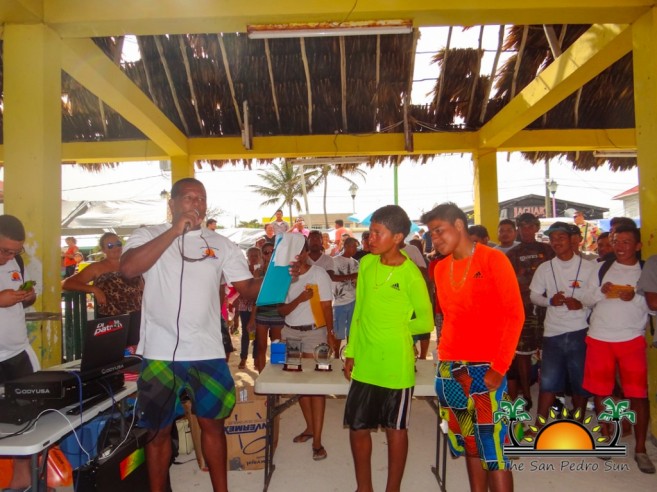 “It was a great race. We hope that it only continues to grow in the coming years and that it serves to promote the beautiful ecosystems across Ambergris Caye. This is no easy race; the elements are brutal, but most of these guys participate in the race year after year. I would like to congratulate all the participants of this year’s race, as well as to all those persons that helped out in making the race a reality,” said Arceo.

After the awards were handed out, the after party kicked off at Central Park with music and lots to eat and drink. The San Pedro Sun congratulates all the participants of the race for challenging themselves in this mental and physical test you are all winners!