The long awaited groundbreaking ceremony of the Ambergris Stadium Renovation Project took place in San Pedro, Ambergris Caye on Friday, September 18th. The event marks the official commencement for the construction of a new sporting facility which will replace the old one. Estimated to cost around 2.3 million dollars, the project is being funded by the Government of Belize in its commitment with youth and sports. Upon completion, this new stadium will meet the needs of the sporting population on the island and will be equipped with a FIFA international standard pitch in order to host international games. The completion of the sport complex is expected to take between eight to ten months at the most. The project is being coordinated by Belize Infrastructure Limited (BIL) in collaboration with the San Pedro Town Council (SPTC), and executed by AM Construction Company from the Orange Walk District.

The ceremony began with a rendition of the national anthem by students of the New Horizon Seventh Day Adventist School (NHSDA). This was followed by the opening prayer delivered by Pastor Clive Welch, who asked the almighty for Belize’s continuous prosperity. Mayor Daniel Guerrero then delivered the welcome address, stressing on the significance this new project has for the sporting community. “Today, I will like to welcome everyone to witness the groundbreaking event of a long awaited sporting project. I will like to emphasize that our island has a lot of sporting talent, be it in the area of volleyball, softball, basketball, or football; San Pedro has excelled in many sporting disciplines. For example in the area of basketball, San Pedro Tiger Sharks have been back to back champions in the National Elite basketball league. Similarly, our high school students have made the mark in the area of softball by representing Belize in Central American games, likewise in the area of Triathlon, Kent Gabourel has retained his national title and has represented Belize in the Commonwealth games in Glasgow Scotland while Jordan Santos has set a new record by being the first islander to take the national junior championships,” said Guerrero. He highlighted these facts, pointing out that even with the lack of sporting facilities, San Pedro athletes have managed to make their presence recognized nationally and internationally. “I applaud their accomplishments and we encourage our athletes to put our island on the map. With the building of this new facility, it will address some of our sporting drawbacks. Nonetheless, I will be the first to acknowledge that much more needs to be invested in the area of sports on the island. We may need a basketball court, a track and field arena and many other facilities. But small steps like this one we are taking today, gives us the hope that in the future we can look into investing more in the area of sports. As you may know, this project came about from a collaborative effort between our local municipality working together with the central government. We need the general citizenry on board, we want our beloved island to move forward, we need all hands on deck despite our political and other differences in order to ensure that our island moves forward,” said Guerrero.

However, the magnitude of the project left a few questions in the air, such as its design and if it can be accomplished. “Every project needs to start with a design and as we go along amendments are done. But I think it is realistic and it will be accomplished and it is a project that I think the sporting community will push for so that it is completed, and the council will be stay behind it to guarantee its completion as well,” said Guerrero. The project was designed by a private architect firm without any involvement of the San Pedro Town Council (SPTC). 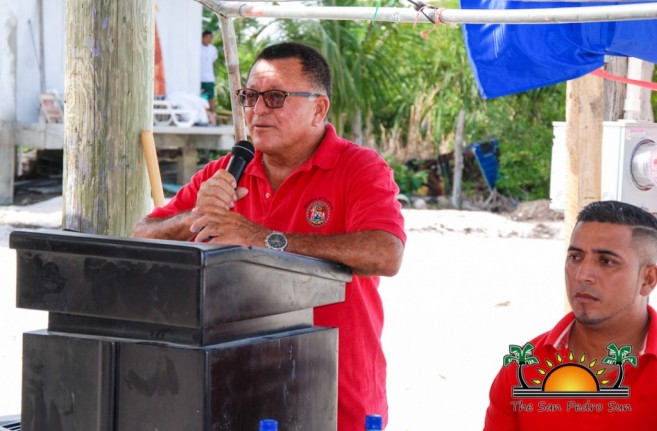 Guerrero also addressed concerns that a local island contractor is not building the facility. “I don’t think there is one contractor on the island that has the type of equipment needed to do this project. The mainland companies are bigger than the ones on the island, and I am not saying that the companies on the island cannot do the job, but they are not equipped to do this type of building. On the other hand, we also have other projects coming up which are part of the funds for this project. From the five million dollars, not only will the Ambergris Stadium be built, but we are looking to construct an enclosed prefab convention centre which will host events such as, volleyball, basketball and many other activities. So whatever funds are left over we need to find a way to use them in projects that will benefit the island,” said Guerrero. He reiterated that the SPTC will work along with BIL towards the satisfactory completion of the project.

According to general manager at BIL, Christy Mastry, the location of the Ambergris Stadium makes it ideal for such a project to take place and to be successful. “The design of the project was able to come through as we were looking for an area to get a grassed football field. When we worked on the Saca Chispas area, that venue had to stay as sand due to the different events that take place there, so we could not put grass at that location. So we had to find an area where we could dedicate into sporting and particularly football for athletes of all ages. After we received the design we sent out invitations to three to five contractors who have qualified for projects of this nature before, and a bidding process began. We use a standard pre-requisite for qualifying bidders and we look in their experience, the availability of funds and from there we look at the most competitive price,” stated Mastry. She mentioned that the contractor who will be spearheading the construction of the stadium has done previous works on the island. “We give priority to local companies within the area of the project, however, because of the requirements needed for this project and the budget; we need to make sure that the contractor has all the qualifications necessary. We did invite contractors from the island, but unfortunately they did not meet the necessary requisites. But that does not preclude them from being sub-contractors in the project and also it does not preclude us from using local labour wherever possible as well.”

Mastry further explained how the funds will be used. “There was never five million dollars allocated for this project. The understanding is that every municipality gets an allocation of five million dollars to diversify sporting. Most of the municipalities have decided to split those funds between football and basketball as the two priority sports. At the moment we are looking at the allocation of a bit over three million to complete the football component and we are looking for a potential site to do a semi-enclosed sporting facility, such as a basketball dome, as there is a great need to find a way to get a proper facility,” said Mastry. After the project is completed, the contractor will ensure that it is fully functional prior to handing it over to the municipality. However, according to Mastry, the success of the facility depends a lot on the management of the place, so proper care needs to be done and great commitment from a management team in order to maintain the facility.

The keynote address was delivered by Minister of Tourism, Culture, and Civil Aviation Honorable Manuel Heredia Jr. who made note of all the transformation in infrastructure that is happening countrywide. “Today we are seen a historical step in the sport area of San Pedro. This transformation in sports means a lot for our island. Sport is good for the youth, just as education, while infrastructure is the way that moves things around. Today we will see the beginning of what will be a first class facility for football, which will put our island to another level. The present government is investing in the country, we want to see our youth succeed, especially in sports and with this new sport facility we hope to encourage our young athletes, to stay in sports and develop their talents,” said Heredia.

As the ceremony wound down, Councilor Hector “Tito” Alamilla, in charge of Culture, Youth, Sports, and Leisure activities, gave the vote of thanks. He thanked the Government of Belize for giving back to San Pedro in the form of the construction new Ambergris Stadium. “I want to thank both the Minister Heredia and the Mayor for believing in that giving back in the area of sports will bring joy for the island, since San Pedro is a very passionate island when it comes to sports. Today, we see past players like the Gonzales brothers and other players in the island who represent us well nationally and internationally. To everyone who has always supported sport and our athletes, we thank them all,” said Alamilla.

Before the ceremony wrapped up, the San Pedro High School marching band entertained the attendees with a band presentation. This was followed by the ceremonial sand dig, the ribbon cutting and the unveiling of the project’s billboard with the stadium’s design.