The Belize Tourism Board in partnership with Love FM successfully debuted their first ever ‘Belize Sea Challenge,’ which saw kayakers enduring the odds of the sea in a five-day race from Punta Gorda Town to Corozal Town. Seven teams braved the 218-mile race that ran through Thursday, May 17th to Monday, May 21st, making stops in Placencia Village, Dangriga Town, Belize City, and San Pedro Town. After five grueling days, the A Team from the Belize Coast Guard, comprising of Daniel Gregorio, and brothers, Godfrey, James, and Mark Alford, emerged as the winning team, clocking a cumulative 35:59:14.
Teams competed in the male, female, and mixed category, leaving each departure point at 5AM every morning. The teams participating included The A Team, Belize International Water Sports, BDF Breaking Waves, Belize Territorial Volunteers, Wave Runners, Delta Squad, and Koop Sheet Metal/NICH. 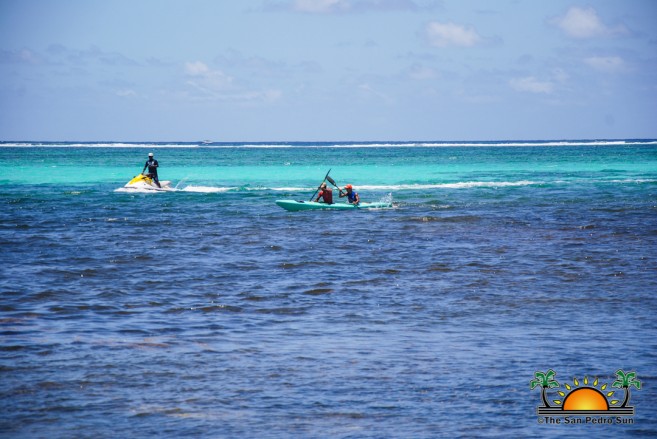 The first leg of the race took kayakers from Punta Gorda Town to Placencia Village, with mini-stops at Avalon Caye and Monkey River, where teams had the opportunity to change paddlers. On the first day the A Team finished in first place with a time of 07:02:45. They managed to keep nearly an hour in the lead over the Belize International Water Sports, who clocked at 07:50:00, and BDF Breaking Waves at 08:12:12, in the male category. The lone female team, Delta Squad, finished at 09:28:57, and Koop Sheet Metal/NICH’s mixed team clocked in at 09:33:42 followed by Belize Territorial Volunteers and Wave Runners.

The second day of the race saw the teams stopping at Riversdale and Hopkins to make changes before arriving in Dangriga Town. This time, Belize International Water Sports made it first, clocking in at 05:58:37, while The A Team clocked in 07:02:45. They were followed by BDF Breaking Waves at 07:03:11. Delta Squad clocked in at 08:41:42, while Koop Sheet Metal/NICH finished in 09:09:06. Finishing this leg of the race were Wave Runners and Belize Territorial Volunteers who continued on the race.

During the third day, the teams made stops to change paddlers at Gales Point and Old Belize. They then proceeded to the BTL Park in Belize City battling rough seas. Belize International Water Sports once again made it first to Belize City, followed by The A Team. Despite these wins, the Belize Coast Guard team was still ahead in terms of accumulative timing. 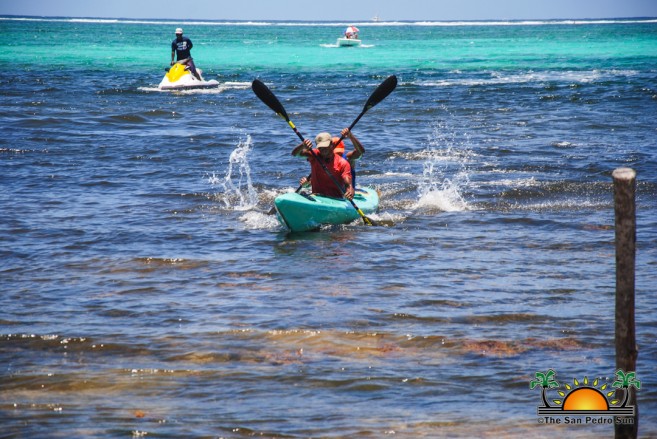 As the race approached its final leg, all seven teams departed early on Sunday, May 20th to Ambergris Caye for the fourth day. Stops were made at St. George’s Caye and Caye Caulker, and by midday, the first teams began arriving at San Pedro’s Central Park. Belize International Water Sports once again arrived first, with a time of 05:56:42. The A Team was close by at 06:07:54, followed by BDF Breaking Waves 06:48:09. The Delta Squad pulled this leg in 09:02:27 and Koop Sheet Metal/NICH did it in 08:53:34. Wave Runners and Belize Territorial Volunteers made it to San Pedro as well, finishing the fourth day of the competition.

Bright and early on Monday, May 21st all seven teams headed to Corozal for the final leg of the race. At Blackadore Caye and Sarteneja, the teams made the necessary changes before heading into Corozal Town. A huge crowd awaited the kayakers at Rainbow Beach overlooking the bay. Once again Belize International Water Sports finished first, followed shortly by The A Team and BDF Breaking Waves. As the other teams arrived they were greeted by a rejoicing crowd in Corozal, complete with live music in celebration of the event.

Winners were awarded prizes in their respective categories, and in the Mixed Category, Koop Sheet Metal/NICH was awarded first place with a cumulative time of 56:09:02. In the Female Category, Delta Squad received their award for the top team with a cumulative total time of 54:44:38.
In the male category, the grand prize and trophy went to The A Team of the Belize Coast Guard, who had a cumulative time of 35:59:14. Despite finishing first in four of the five legs of the race, Belize International Water Sports’ total time was 36:15:17, 17 minutes and 03 seconds more than The A Team. Thus, they had to settle for second place. BDF Breaking Waves completed the race in 41:45:04, taking the third place prize. All top teams in the various categories proudly accepted their prizes, and all participants who finished received a medal.

Congratulations to all the participants of this year’s BTB Love Belize Sea Challenge. Plans are already underway for the second edition in which The A Team will be back defending their championship. Kudos to all the organizers and sponsors for making the event possible and making history in this new tradition that aims to highlight the beauty of Belize and its Caribbean coast.