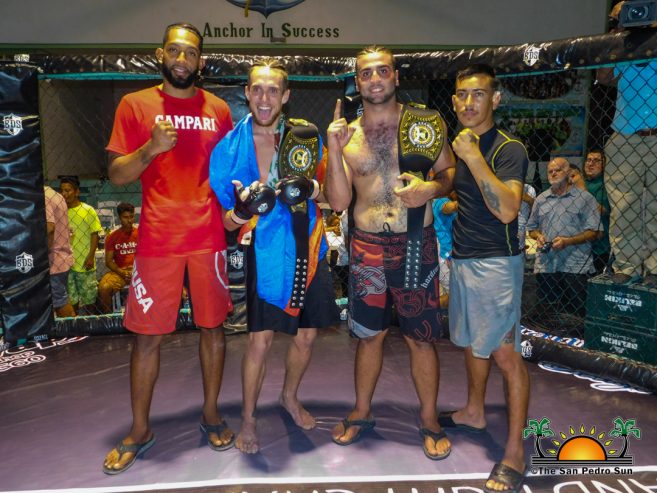 Bryce Peterson won his second Bantamweight belt after submitting his opponent Jonathan Campos via guillotine choke within the first two minutes of the first round. Omar Alyakhni was awarded the heavy-weight championship by default. Belizeans Ernesto Herrarte and Charles Richards claimed their victories by unanimous decision and a solid Knockout (KO) respectively.

The event included eight fights, each consisting of three rounds, featuring Belizean and Mexican fighters. The first bout started shortly after 8PM, between Belizeans Tyson Franzua and Travis Pollard. They went hard at each other, but after three rounds, the match ended in a draw. 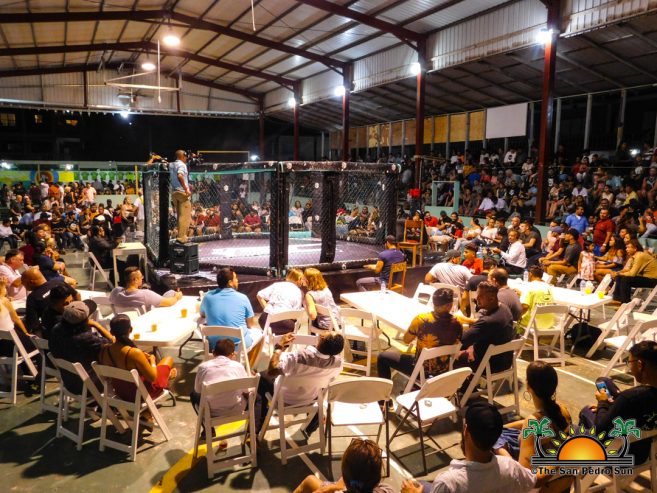 Next, was Belizean Ernesto Herrarte against Mexican Carlos Lagunas. Herrarte showed his strength and skills throughout the fight, and after scores were tallied, he was announced the winner via unanimous decision. While, Belizeans celebrated the win in the packed auditorium, the second bout of the evening saw Mexico even out the score. Belize’s Julian Rivero took on Edgar Tepatlan, who walked away with the victory via a technical knockout. 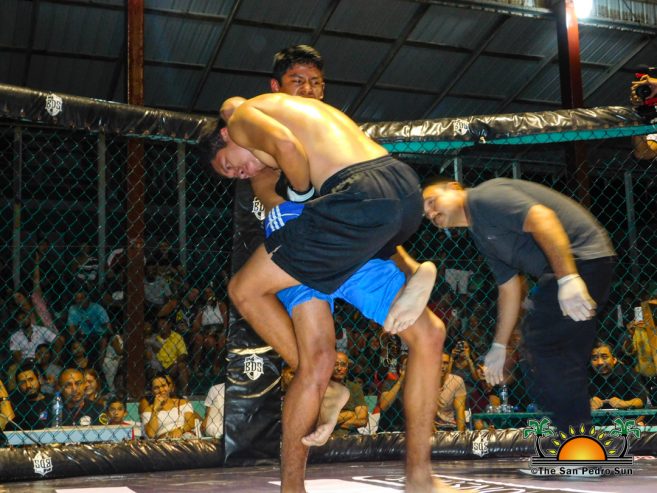 The match that followed was between Belizeans Jash Caballero and Marvin Garcia, and it ended in a draw. After a short intermission, it was time for another bout between Mexico and Belize. Mexican Manuel Solis, aka Caballo, stepped into the cage determined to destroy Belizean Charles ‘Raba’ Richards. 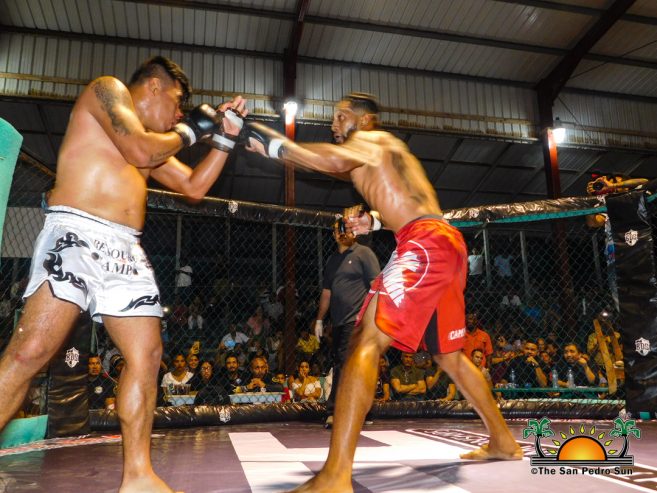 The match drew loud cheers from the crowd as Solis and Richards gave it all inside the cage. But in the third and final round, Richards threw a powerful right blow, sending Solis flat to the floor, claiming the victory via KO. 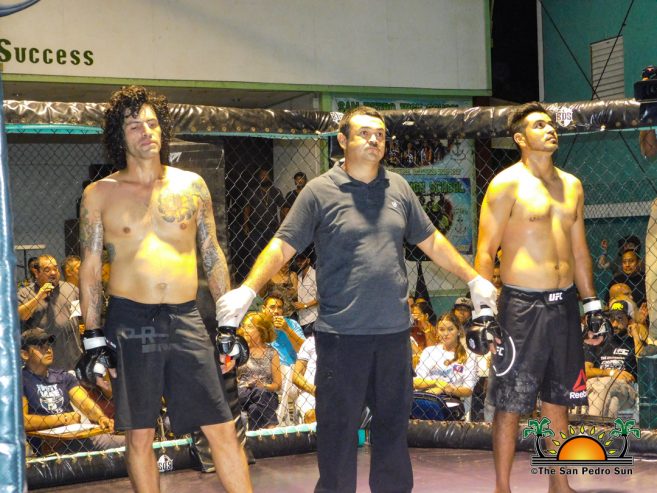 The next match was between Belizean Josh Zavala and Mexican Jose Medina. This was another intense battle, but ended without a winner after judges declared the match invalid due to illegal strikes from Zavala and called it a ‘no contest.’ 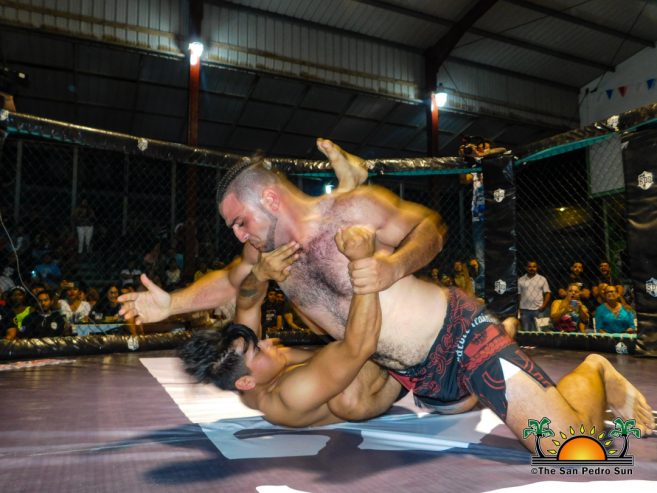 Omar Alyakhni’s heavy-weight fight did not take place as his opponent was a no-show. Instead, he did an exhibit Jiu-Jitsu match with Mexican Adriel Sanchez. Afterwards, Alyakhni was awarded the heavy-weight belt via default. 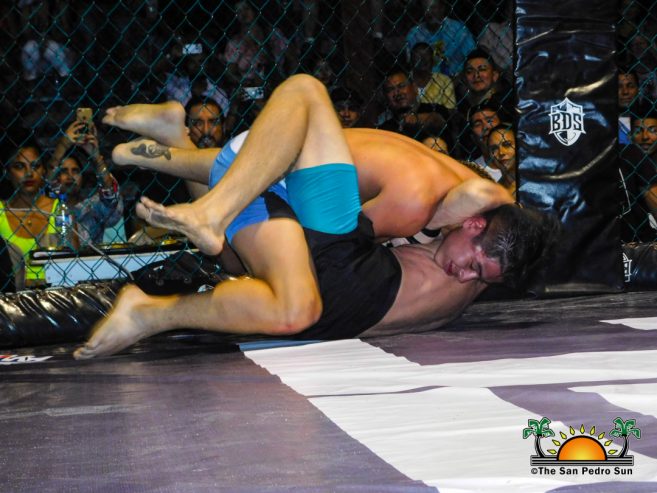 After the last intermission, the evening’s headline match saw an undefeated Bryce Peterson step into the cage, hungry for another victory, this time against Mexican opponent Jonathan Campos. The fight saw Campos attacking Peterson first, but he responded aggressively and managed to subdue him on the floor. As both grappled, Peterson quickly overpowered Campos with a guillotine choke, and at minute 1:58, the Mexican fighter tapped out and the match was over. 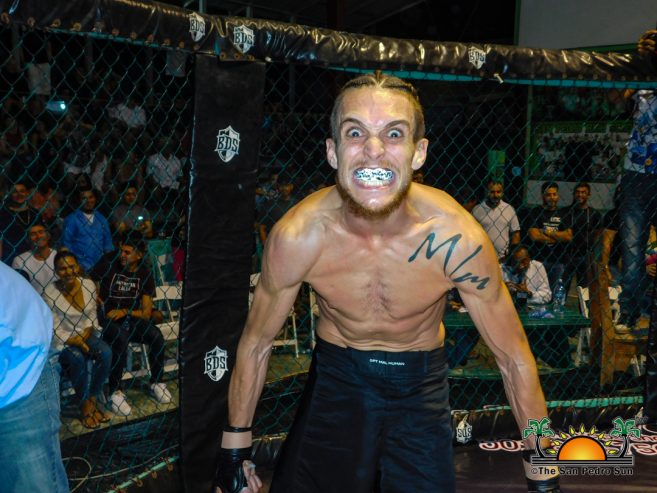 Peterson was declared the winner by submission and Belize scored its fourth victory for the evening. This is the second Bantamweight title Peterson wins; he won the first one on July 25, 2019 at the Pro FC 2 MMA ‘Island Takeover’ event. 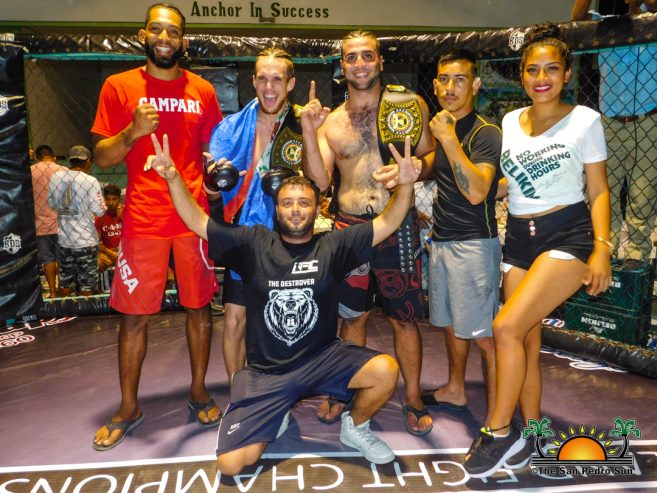 All Belizean athletes say they are proud to represent Belize in the sport, and they thank everyone who came out to support them. Peterson is ecstatic with his win, and looks forward to continue growing in the sport of MMA. “I am very excited for this win, this is another great achievement,” Peterson told The San Pedro Sun. He is also extremely proud of his teammates. “I am so proud of my guys, not just because of the outcomes of last night but the hard work they have put in leading up to most of their debut fights. The hard work and dedication of the guys who come to train and expand their knowledge is obviously paying off.” 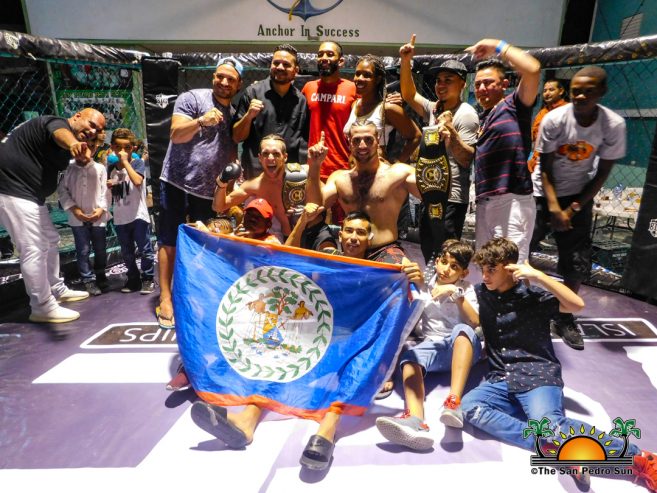 Organizers deemed the event a grand success, and announced that another MMA event is likely to take place on the island this year. A BIG thank you goes out to everyone who attended the fight night, and all sponsors who made the event possible and for continuing to support this sporting discipline on the island.