On Thursday, September 8th, a press conference took place at the Blue Water Grill to formally present the upcoming Mixed Martial Arts (MMA) tournament on the island dubbed ‘501 Fight Night I: Genesis.’ The fight is on Saturday, September 10th, at the Angel Nuñez Auditorium. Doors open at 5PM. 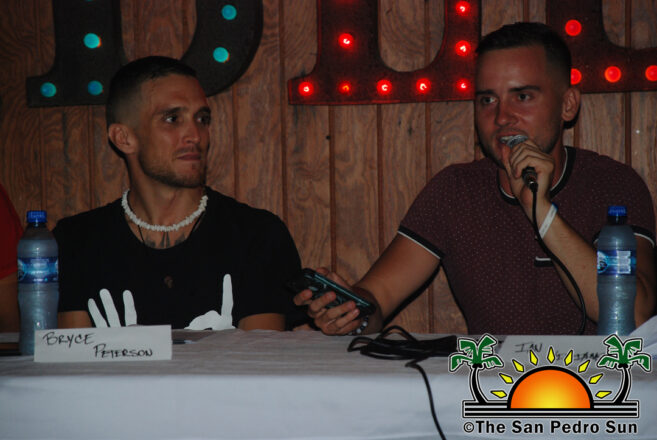 The press conference started at 7:30PM by promoter Ian Williams and San Pedro’s very own Bryce Peterson. Peterson is a leading MMA fighter who will also be competing in the tournament. The fighters hailing from across Belize, El Salvador, the United States, and Canada introduced themselves and shared a few words with the audience. Many thanked the opportunity and committed to giving their best on fight night. Peterson said he had been waiting for such an opportunity and, like everyone else, has been preparing and sacrificing for weeks to be in the best shape possible.

According to promoter Williams, there will be two Jiu Jitsu fights and three MMA matches in the prelims. After the prelims, there will be four additional fights leading to the main event of the evening. These fights are taking place in the following divisions, Bantamweight, Middleweight, Featherweight, and the final match will be a Bantamweight title fight.

On Friday, September 9th, there was an official weigh-in session, and later in the evening, there will be a short show by the beach for a session of face-offs. Tickets for the event on Saturday are still available and can be purchased from business establishments like the Juice Dive, Belize Fitness, Gill-E’s Pour House, Xsite Belize Sailing & Adventures, Mind Matter Academy on front street, and places at Secret Beach such as Blue Bayou and Maruba Beach Klub and Happy Island.