On Tuesday, November 15th, Tropic Air officially inaugurated a bi-weekly non-stop flight from the Philip Goldson International Airport (PGIA), north of Belize City, to the Ramon Villeda Morales International Airport in San Pedro Sula, Honduras. The Belizean airline based in San Pedro Town, Ambergris Caye, has scheduled these flights every Tuesday and Thursday, leaving at 7AM from Belize and 9AM from San Pedro Sula. 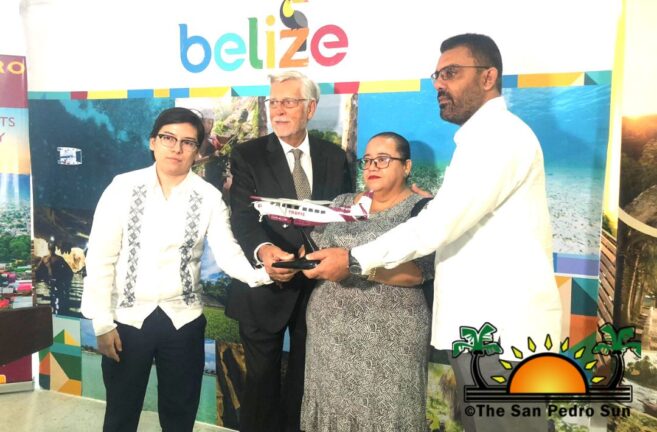 A short ceremony took place at PGIA to inaugurate the new route, where Tropic Air’s Chief Executive Officer Steven Schulte, Minister of Tourism and Diaspora Relations Honourable Anthony Mahler, among members from the Belize Tourism Board, personnel of the Embassy of Honduras in Belize, and special guests gathered to witness the first flight. Masters of Ceremonies Anthony Hunt welcomed the attendees and then turned over the podium to CEO Schulte. “This is another plus for Belize’s regional tourism, business, and cargo industry,” said Schulte. He spoke of the importance of having such routes active all year-round to support connectivity to the Central American markets.

Minister Mahler said his ministry has been working hand in hand with the private sector to achieve new flight routes like this one and with other airlines. “We have been going to airlines’ headquarters and pitching Belize. “Two years we promised that we would do everything possible to continue building the airlift, and with Tropic Air’s partnership, we have done so again,” said Mahler. The minister said his ministry will always support this type of business venture by Belizean companies. 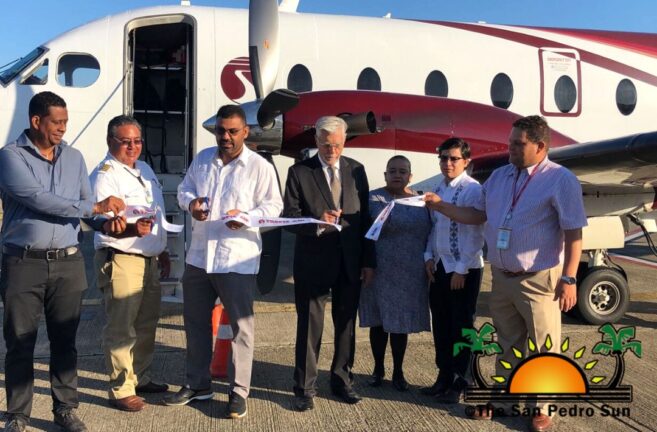 Following the formalities, Schulte and Mahler participated in the cutting of a cake bearing a Tropic Air airplane. Afterward, the official ribbon-cutting took place, and those traveling to San Pedro Sula boarded the airline’s Beechcraft aircraft. Based on bookings, service to San Pedro Sula will be via Tropic’s modern, glass cockpit (G1000) Cessna Caravan airplanes. They are air-conditioned and equipped with radar, GPS navigation, and terrain mapping.

In San Pedro Sula the arriving flight was welcomed with a ceremony celebrating the new service from Belize. Some of the passengers shared that this new route would make it easier to visit the Honduran mainland and for visitors from that country to visit Belize. Before this flight, one of the options to reach Honduras (mainland) was via boat from Dangriga Town or Independence Village, Stann Creek.
San Pedro Sula is Tropic Air’s second destination in Honduras after Roatan. To book your San Pedro Sula ticket visit www.tropicair.com or make your reservations by emailing [email protected] You can also call 226-2626 on Ambergris Caye or any of their branches countrywide.