After months in the works to further connect Belize with Central America, on Tuesday, February 1st, Tropic Air announced its new international route to San Salvador, El Salvador. The maiden flight is set for February 11th, and will initially be scheduled for Mondays, Wednesdays, and Fridays. For February, the airline is offering an introductory fare of US$99 each way, plus taxes.
The nonstop service between Belize City’s Philip Goldson International Airport and San Salvador’s International Airport Saint Oscar Arnulfo Romero y Galdamez will take approximately one hour. The schedule has flights leaving Belize at 3PM and returning from El Salvador at 5PM on the days assigned. The flights will be on Tropic’s twin-engine Beechcraft 1900D, which seats 19 passengers. This aircraft is designed for this type of regional route and is a favorite in the aviation industry for its speed and passenger comfort. 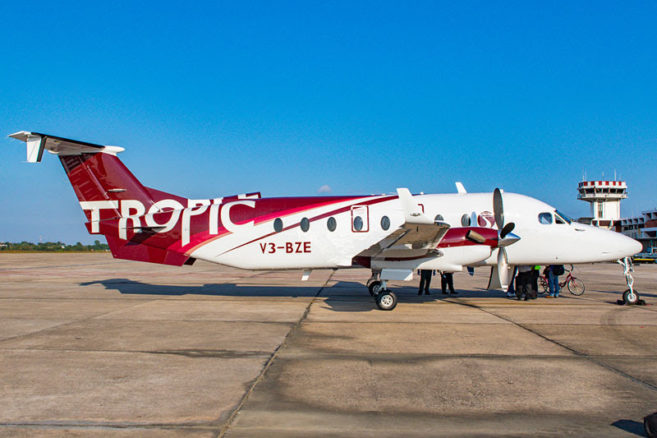 Tropic Air President John E. Greif III is said to be very proud of their international service growth, connecting Belize to several regional destinations in over a decade. “San Salvador is considered a second home to many in Belize, with many historical and economic ties, so our expansion into this market is a natural one,” said Greif.  Tropic’s Chief Executive Officer Steven Schulte added that San Salvador may turn into a major destination with lots of potential. Schulte said that regional air connectivity is a priority for Tropic Air and they believe this new route can quickly grow into a daily service.
This new direct flight to Belize from another Central American city broadens the opportunities for business and tourism as well. San Salvador is considered the economic epicenter of northern Central America and an important trading partner for Belize. Tropic Air is now proud to add this route to their other regional destinations including Cancun, Mexico, Roatan, Honduras, and Flores Peten, in Guatemala.
To book a flight visit www.tropicair.com or from any of their authorized sale agents.