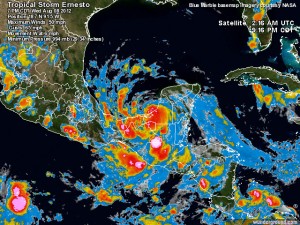 San Pedro Ambergris Caye was spared a direct hit from Category One Hurricane Ernesto which left behind mostly wind and rain. The National Emergency Management Organization (NEMO) first issued advisories beginning on Friday, August 3rd when Ernesto became a tropical storm, the fourth named storm to form in the Atlantic region this year. Computer modules from very early showed that Belize would be directly impacted by Ernesto.

By Monday, August 6th NEMO was fully activated including the Emergency Operating Committee (EOC) in San Pedro Town. The entire country was placed under a tropical storm watch which quickly elevated to a Hurricane Watch later that day. On Ambergris Caye, the San Pedro NEMO branch was in full operation advising residents to activate their hurricane preparedness plan.

Residents living in the low-lying areas were advised to make necessary arrangements for voluntary evacuation in preparation for the imminent impact of Ernesto, which was originally scheduled to make landfall over northern Belize and quite possibly over Ambergris Caye. Residents and business owners alike boarded buildings and windows, securing their properties while local tour operators and fishermen began moving their vessels to safe harbor. Over 1,000 people voluntarily evacuated the island by both air and sea.

By midmorning Tuesday, August 7th the projected land fall had changed and a more accurate predication from the Belize Meteorological Service and NEMO indicated that the newly formed Hurricane Ernesto would make land fall north of the Belize and Mexico, possibly between Xcalack and Mahahual in the southern most part of Quintana Roo, Mexico. None the less, Belize remained under a hurricane watch as Ernesto had hurricane force winds of 85 miles per hour extending outwards from the center up to about 35 miles. Tropical force winds extended for over 120 miles from the center reaching the northern portion of Belize, including the cayes. By Tuesday evening, the effects of Ernesto was being felt as thick black clouds from the feeder bands began to interact with land. Sea surge with waves of about three to five feet began crashing onto the eastern coast of Ambergris Caye. Gust of winds measuring 25 to about 40 miles per hour were felt as early as 3PM. Five hurricane shelters were opened to accommodate people living in the flood prone areas of San Mateo, San Pedrito Area, Elliot and DFC subdivisions.

An advisory read at 9:15PM by Chief Meteorologist of Belize Dennis Gonguez indicated that Hurricane Ernesto was 0 miles from Mahahual, Mexico in other words, had made landfall. Belizeans across the country began breathing a sigh of relief. Tropical force winds were felt in most parts of the northern districts and cayes including Ambergris Caye. In San Pedro Town Ernesto’s wind speed reached a maximum of 59 miles per hour. Strong gusts of wind and constant rain affected the entire island until about midday on Wednesday August 8th.  The “all clear” was declared at 9AM by the Government of Belize.

Chairman of the EOC of the San Pedro Branch of NEMO, Hon. Manuel Heredia Jr. said that while the island was not directly impacted the damage assessment shows significant beach erosion. “There was no structural damage reported. We noticed that some of the streets show signs of deterioration due to the storm. What we have noticed is significant beach erosion on the northern part of the town and where there is a direct channel to the reef.”  In the days ahead, Heredia will be meeting with local authorities to see what measures will be taken to reclaim the beach that was lost.

While Belize was spared once again, our direct northern neighboring communities in Mexico were not so fortunate. Ernesto slammed into Mahahual, Mexico a community of approximately 900, with winds of 85 miles per hour. Earlier in the day the government of Mexico had evacuated most of the people living along the coastal communities to higher grounds. The last time Mahahual experienced a direct hit as such was on 17th of August 2007 when Hurricane Dean crashed on to the Yucatan Peninsula as a category five hurricane.

San Pedro Town and its residents have enjoyed a very good relationship with residents and local authorities of both Mexican communities. Mayor of San Pedro Town Daniel Guerrero explained to The San Pedro Sun that his office will be in contact with our Mexican counterparts in Xcalak and Mahahual to see if any or what kind of support can be given to our neighboring residents.