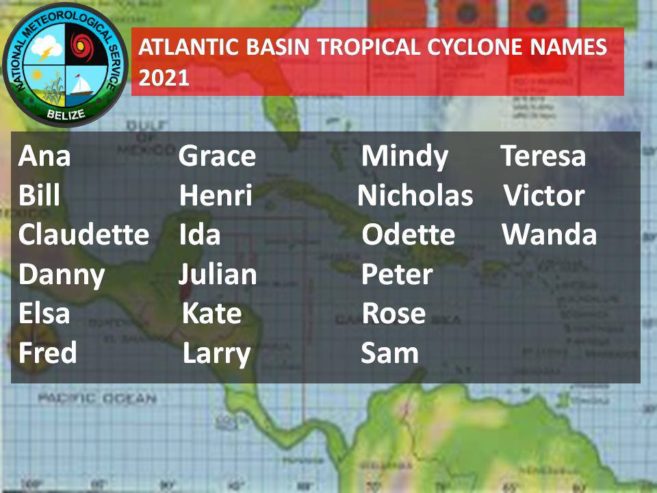 The 2021 forecast is suggesting that tropical cyclone activity will be above normal in the Atlantic Basin (North Atlantic Ocean, Caribbean Sea and the Gulf of Mexico). The prediction is for there to be 13 to 20 named storms, of those six to 10 are expected to become hurricanes and three to six are expected to become major hurricanes (Category 3 or stronger). Using the updated 1991 to 2020 climatology, an average season in the Atlantic Basin now consists of 14 named storms, seven hurricanes and three major hurricanes.
The main factors that are indicating an active 2021 Atlantic hurricane season are:
(1) No El Niño is expected this year, therefore, this factor will not contribute to the suppression of tropical cyclone activity in the Atlantic basin.
(2) Warmer than average sea surface temperatures are expected by the peak of the season in the tropical Atlantic Ocean and Caribbean Sea, which tends to favour hurricane development.
(3) Weaker vertical wind shear
What Does this Mean for Belize?
Seasonal predictions give us an indication of how active a particular hurricane season is expected to be but it does not tell us when a particular hurricane will develop or where it will track once developed. One or more of the 13 to 20 named storms forecast to develop this season could hit the country or none at all. Therefore, history teaches us, as a nation located in such a vulnerable area, we should be prepared each year no matter what the forecast is.
The National Meteorological Service (NMS) of Belize under the Ministry of Sustainable Development, Climate Change and Disaster Risk Management will use its team of experts along with all assets at its disposal, including its recently repaired and now functioning doppler radar, to monitor and track developing systems and alert the National Emergency Management Organization and the public in a timely manner should such a system pose a threat to Belize. The NMS advises members of the public to review their family emergency plans and to be prepared for any eventuality during the 2021 Hurricane Season.