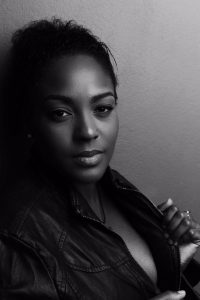 On March 27th and 28th, the Youth Advocacy Through Arts (YATA) will be putting on a production of “For Colored Girls” at the Bliss Center for Performing Arts. The show will start at 7PM both nights and is intended for a mature audience, so only people 18 years or older will be admitted. Tickets are on sale with general seats costing $15 and reserved tickets $20. “For Colored Girls” is a play written by Ntozake Shange in 1975. It follows the stories of seven women, who are only referred to by the color they are wearing (Lady in Red, Lady in Blue, etc.), and the oppression they have suffered in a racist and sexist society. The play broaches topics about rape, abandonment, abortion, and domestic violence. Since its initial release, it has been adapted into films, books, Broadway plays, and performed worldwide.
Cherysh La Touche, who hails from Trinidad and Tobago and is a member of YATA, directed the play. She has been involved in the Performing Arts from the age of five. Earning a Bachelor’s degree in Musical Arts (Special) with honors from the University of the West Indies (UWI), she has also stacked an array of over 20 musical theatre performances and has traveled across the Caribbean and North America as a vocalist and percussionist with the UWI Alumni Chorale. Most recently, she has been a member of the National Theatre Arts Company of Trinidad and Tobago and represented her country on stage as an actress, dancer, and vocalist in Carifesta 2019. 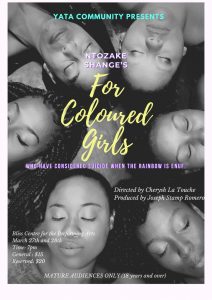 La Touche shared with The San Pedro Sun what drew her to the play was that “It’s truly a timeless piece. It’s disheartening to think that the problems of 1975 are still very prominent so many decades later, but I wanted to do a meaningful play that has a fluidity that any audience member could grasp, whether you’re male or female.” She said she is most looking forward to seeing the reactions of the audience on opening night. “I know it’s going to be a give and take, because most people can’t deal with raw truth in front of them- most times, as Caribbean people, we have a tendency to laugh off the seriousness so we can deal with our emotions better,” she commented.
After each performance, they will hold a question and answer segment, where the audience will have the opportunity to interact with the director, producer, and cast. “For Colored Girls” focuses heavily on controversial issues that affect women; however, La Touche believes these negative experiences are universal and bring an energy of togetherness within female circles especially. She said, “It’s a little morbid to think that something negative could bring people together, but if the togetherness allows everyone to understand that something has to change in society, then so be it.”
La Touche, along with the producer of the play, Joseph Stamp Romero, will continue to produce plays and performances within the country, including another play to tie in with International Men’s Day in November. The goal of the YATA is to incorporate their knowledge in technical theatre with the “ground roots” in Belize. YATA encourages the general public to come out and experience the play on either night. The San Pedro Sun congratulates Cherysh La Touche on her directorial debut and wishes her good luck on opening night!