The current standstill outside Orange Walk Town by the sugar factory continues with a possibility to come to an end on Monday, January 3, 2022. The main area of contention between the Belize Sugar Cane Farmers Association (BSCFA) and the Belize Sugar Industry (BSI)/American Sugar Refinery (ASR) is an interim agreement regarding the handling/ milling of the sugarcane expected to last throughout the crop in August of 2022, instead of only up to the end of April. Farmers fear that if the commercial agreement ends in April, it could jeopardize the sugar season of the upcoming year. 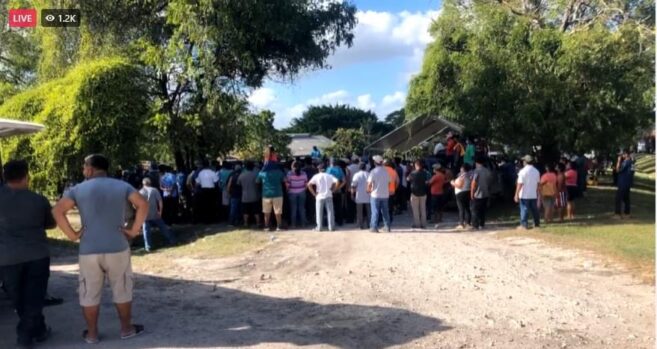 Since Tuesday, December 28th, BSCFA has refused to deliver cane to the factory at Tower Hill unless there is assurance regarding the interim agreement. The impasse has seen the blockade by cane trucks in front of the installations of BSI/ASR. The negotiations even saw the participation of Minister of Agriculture Honourable Jose Mai and Prime Minister Honorable John Briceno, but no agreement could be reached. On Thursday, December 30th, the cane farmers cleared the blockade for about two hours, as a meeting was to take place, and by 3PM the interim agreement was to be signed lasting up to August 2022. However, no agreement was reached, and the farmers once again reportedly blocked the entrance of BSI/ASR.

There are reports that farmers are so upset that they threaten to block the Philip Goldson Highway linking Orange Walk and Belize City. A group of them marched in front of Prime Minister Briceño’s residence in Orange Walk Town. They demanded better assistance and for his resignation as well.

BSI/ASR said the blockade is illegal and damaging to the broader industry, preventing cane farmers from all associations from delivering their cane. In a press release, BSI/ASR said the situation is worrying. They expect an improved cane crop where sugar prices combined with the benefits from investments have resulted in a 10% improvement in the first cane price estimate for this crop. The delay, if prolonged, will risk leaving cane standing in the ground as a direct result of the blockage and BSCFA’s deliberate breach of its cane purchase and sale agreement with BSI that remains in effect through January 19, 2022.

BSI added that it does not condone the illegal tactics and threats of violence to pressure concessions from the mill. There is no place for such tactics in the modern sugar industry and will only damage the credibility of the

On December 23rd, Prime Minister Briceño noted that a decision to open the season had already been taken. In a press release from the BSCFA, they detailed that the Sugar Industry Control Board (SICB) held a meeting to discuss the starting date of the 2021/2022 crop season. BSCA tabled a resolution that the start date is to be set and declared only after the interim agreement granting an extension of the current commercial contract for a period ending August 1, 2022.  The season’s opening was set for December 27th by a mandate from Prime Minister Briceño, and SICB Chairman Marcos Osorio asked it to be gazetted. According to BSCA, the prime minister wrote to both them and BSI/ASR proposing consideration of the following in the current commercial agreement for the 2021/2022 crop: BSI/ASR and BSCA engage in good faith negotiations beginning January 2022 and conclude a new commercial agreement before April 30, 2022. If such an agreement is not concluded before April 2022, the interim agreement will expire. The note from the prime minister added that after the expiration of the agreement, only Associations and registered cane farmers who have signed commercial agreements with BSI/ASR would be permitted to deliver cane to the mill. The BSCFA, however, has expressed to Prime Minister Briceño that it can only come to an agreement with BSI/ASR on this interim agreement if it contains a provision for an automatic extension of the expiry date of April 30, 2022, to August 1, 2022. The BSCFA said they had proposed such an interim agreement to end the crop in August of next year, but BSI/ASR has rejected such a proposal. Members of the BSCFA say that ending the season in April will affect the flow of their cane delivery; they need more time to deliver every load of cane effectively.

As the delay continues in the crop season, tons of sugar cane remain in the plantations. According to the SICB’s Chairman Osorio, over 40,000 tons of sugarcane ready for harvest during the last crop was left in the fields. This was due to the inconvenience that the mill could not take all the cane production.

The association hopes this is not the case during this season and is looking forward to signing the interim agreement on Monday, January 3rd, in the manner it has been proposed. Meanwhile, the BSCFA calls on its members to obey the SICB directive by commencing deliveries of clean and mature cane to the mill as of the declared date-December 27th. The association also discourages its members from engaging in any activity disrupting the cane delivery schedule.