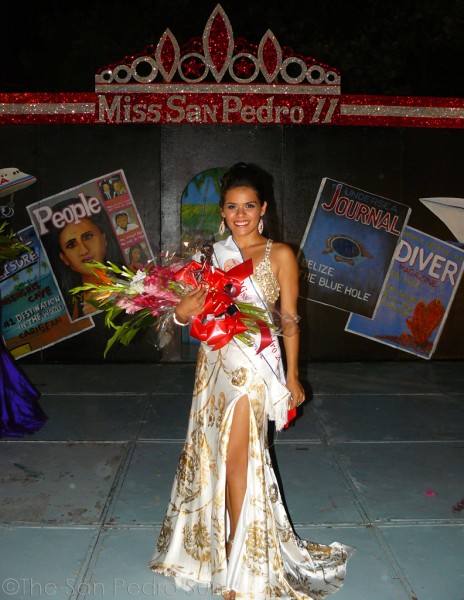 There are many words that can be used to describe this year’s Miss San Pedro Pageant: stunning, elegant, fun, spectacular and festive. At the end of the night, those same words can be used to describe San Pedro’s newest beauty ambassador. She is none other than the gorgeous Yakarelis Hernandez. Chosen from amongst five contestants, Yakarelis represented Victoria House, and will be officially crowned on Saturday, September 10th at the Old Football Field before the uniform parade celebrating “St. George’s Caye Day.” 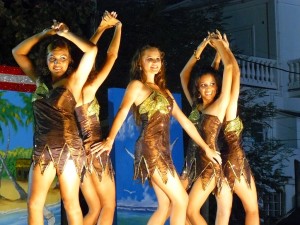 As is customary, the pageant was held at the Old Football Field under the theme: “A Unique Paradise, An Island Fiesta.” The always engaging and dynamic Eiden Salazar Jr. was Master of Ceremonies, and as part of the show planned for the night, he narrated specially prepared stories that were acted out by members of the San Pedro Dance Company. The first story involved the history of the coconut plantations, and showed the evolving of the San Pedrano culture. Afterwards, Eiden called the five candidates on stage for their opening dance number. Josie Lopez (Captain Shark’s), Leonela Eiley (Castillo’s Hardware), Christine Syme (Fido’s Courtyard), Trisha Acosta (Jaguar’s Temple Night Club) and Yakarelis Hernandez (Victoria House) were joined by outgoing Miss San Pedro Natasha Stuart. The contestants then introduced themselves and their sponsors before heading off to prepare for the costume presentation.

During the intermission, entertainment was provided by the San Pedro Dance Company and Truth in Motion. To the delight of the audience, there were other changes taking place onstage as well. Strong young men swiftly changed the backdrop of the stage, and panels painted by Efrain Guerrero changed from showing the coconut plantations, to the lobster industry. The delegates then presented themselves in a variety of costumes depicting the different celebrations that San Pedro hosts. There was the Carnaval (Josie), the September Celebrations (Leonela), the Dia De San Pedro Festival (Christine), Lobsterfest (Trisha) and San Pedro’s many Fishing Tournaments (Yakarelis). The costumes were beautifully detailed and colorful; each showing the wonderful celebratory spirit that San Pedro is known for.

After the applause died down, the audience was once again breathlessly anticipating the next segment, the swimsuit portion of the evening. Once again, organizers showcased immense creativity when a large, festive lobster trap was strategically placed on stage. Helping out was a member of the San Pedro Dance Company, dressed like a fisherman, ready to swing open the trap door and reveal his “catch”. Each gorgeous young woman stepped out to thunderous applause, modeling elegant swimwear sponsored by Sunrise Realty Ltd. Around their shoulders were specially commissioned “fishnet” shawls that added to the fishing theme. All five girls presented themselves with confidence and poise, modeling their white cut-out one piece.

All too soon, it was time for the elegant evening gowns. And again, the organizers surprised the audience with their final stage backdrop change: from Coconut Plantation, to Lobster Industry, to our current Tourism Industry. Showing how tourists arrive via air or sea, and how Ambergris Caye has been recognized and featured in many publications worldwide, the final stage piece capped off the evening. To the tune of Bruno Mars’ “Just the Way You Are”, Josie, Leonela, Christine, Trisha and Yakarelis flaunted their gorgeous gowns. Each contestant radiated elegance, beauty, poise and grace, with dazzling smiles that showed confidence, all five young ladies took the audience’s breath away.

Also blown away were the five judges who had the difficult job of choosing the winner of the night. They were Miguel Guerrero, Clyve Myers, Yvette Graniel-Martin, Karen Burke-Young and Gaylene Tesucum. All five judges listened attentively as each girl faced the most difficult part of the night – the Question and Answer section. Host Eiden Salazar read out the questions twice for each of the girls, and they all answered confidently, much to the delight of the crowd. Then, as the judges deliberated, Miss San Pedro 2010-2011 Natasha Stuart bid her final, emotional farewell to her beloved San Pedro.

Before the winner was announced however, there were other prizes to give out. Taking the title of Miss Congeniality was Christine Syme, and she was gifted with a bouquet of tropical flowers, statuette and a Relaxation Massage by Shirley Eiley. Yakarelis Hernandez was named Miss Photogenic, and she received a statuette, sash, bouquet, framed portrait from Belicolor and a gift from Danny’s Snacks. As excitement grew, MC Eiden announced that Christine also took the honor of being named first runner-up. She won $500 cash from the San Pedro Town Council, a savings account at The Belize Bank, gift certificates from Island Secret Boutique, Mar De Colores, Marina’s Store, Holiday Hotel and Top Notch, and dinners from Celi’s Restaurant and Elvi’s Kitchen.

Then, finally, it was the moment of truth: to the sound of drum-roll, the crowd positively roared when Eiden announced that the new Miss San Pedro 2011-2012 was Miss Yakarelis Hernandez! Along with the title of Miss San Pedro and a gorgeous crown, Yakarelis takes home $3,000 courtesy of the San Pedro Town Council, a framed portrait from Belicolor, a photo package from Conch Creative, Cindy Lu Photography and Jose Luis Zapata Photography. She also won gift certificates from Lynn’s Boutique, Rapidito Loans, Island Gear, and the Beauty Club. Also included in her gift package was a facial from Clinica Los Pinos, dinner at Wild Mango’s, two-month membership at Train Station Fitness Club, a stereo speaker system from CSM, a gift from Moon Dancer, and a savings account at First Caribbean International. All other gracious participants received consolation prizes of cash, gifts, dinners and more.

The San Pedro Sun commends all the young ladies, their sponsors and the pageant coordinators for a job well done, and we join the community in congratulating Yakarelis Hernandez as the new Miss San Pedro 2011-2012.