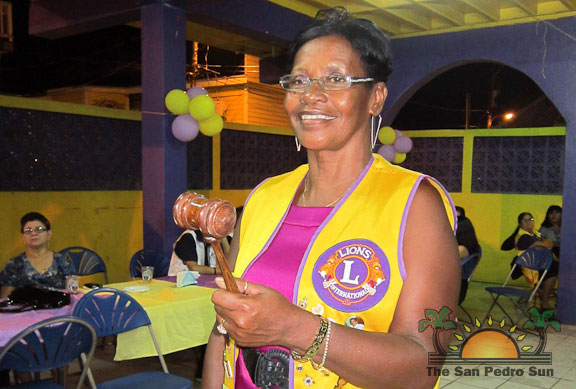 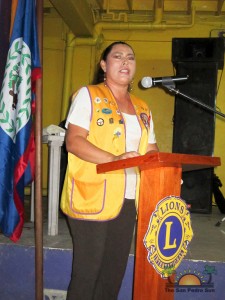 The event had representation from the Belize City Lions Club and the Chetumal City, Mexico Lions Club. In giving the welcoming remarks, SP Lions Club Queen Shantell Pascascio reiterated the solemnity of the installation. She also encouraged Lion members to take the installation as an opportunity to renew their commitment to the Lions organization, “to serve.” Afterwards Kay, in her remarks, explained that one of her leading projects came to a reality with the chartering of a Leo’s club. She also thanked the community and members for lending their support during her year of presidency and pledged to work with the new president in moving the club forward. After Kay’s remarks the installation was conducted.

It is the first time in the history of the SP Lions that three females have been elected as Presidents consecutively. For President Spain, she was happy to be making history and said that she finally accepted to take up the challenge. “It is a very special privilege for me to stand here as the incoming new president of the San Pedro Lions Club. I will say that I have finally decided to take the challenge of leading one of the most dynamic clubs in the entire Zone 59. I say finally because I have been running and dodging from being the President for some years now but I think that time has caught up on me,” said Spain. 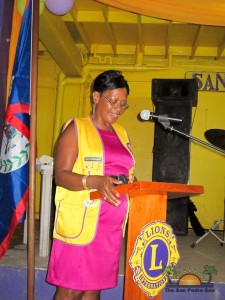 In setting the stage for her presidency Lion Spain said her mantra is to foster a better relationship between the club and the community. “I believe in working hard and at the same time ensuring that everyone has some fun as well. I also believe that if something is working fine and is not broken, then there is no need to fix it. I want to make it absolutely clear that I am not taking the leadership to change things in the Lions, but I am taking the leadership to foster more ‘Lionistic’ spirit in our community,” explained Spain. In terms of moving forward Lion Spain said that, “Our club can only do as much as our members intend to get involved in. Not because I am the president means that entire work must be left on the shoulders of one person. Neither do I intend to leave all the work to our members. From past experiences I can tell you that I have seen very good example of successful presidents and behind every good president there were working members. Our club is the most active club in the entire country, one that is the envy of the entire Zone 59. Let’s keep it that way or make it even better. Those members who have been active and hardworking, congratulations, and let us continue to work in touching the lives of the blind and sick. Those members who are not as active as others, I want to encourage you to get more involved, I can guarantee you that the feeling of serving others is rewarding.”

Guest speaker at the event was the manager of the Ramon’s Village Resort Einer Gomez. In congratulating the outgoing and incoming presidents, Gomez said that, “The Lions Club gave a new meaning to volunteerism and signified a status in our growing community. Many of today’s successes are attributed to the countless community projects that this Club embarked on, especially in its younger years. This unselfish group has demonstrated to me that unity is power and that giving is strength… there is no doubt in my mind that the San Pedro Lions Club will continue to succeed because of its unselfishness and the willingness to serve.”

Following the installation, awards were given out to different members for their support over the past year. Special pins were presidents to 10 year and 25 year members of the club. The club also took the opportunity to president Lion Mel Paz with a special plaque for her outstanding contribution to the club during her two year presidency, from 2009 to 2011.

The San Pedro Sun joins the island in congratulating President Lion Mel Spain on her installation and wishes the newly installed board all the best during their term in office.

Dr. Graham presents on the Status of Sharks in Belize30 Photos