Wayne Miller is the new Chairman of Caye Caulker village and is taking over from Alberto Villanueva. Miller was elected on Sunday June 16th following elections for local government. He will head the local government in Caye Caulker along with six councilors for the next three years once they are sworn in by a Justice of the Peace.

From early during the day, most candidates – all who ran independently were busy bringing in their supporters to the polls. Nominations started at 9AM sharp and polls were declared open by 10AM and remain opened until 5PM. The entire process went peacefully. Three hours following the closure of the polls, preliminary results were out. Results indicated a clear advantage for Miller over the other opponents. But while the Belize Elections and Boundaries Department has not officially released the results, The San Pedro Sun spoke to a few candidates that contested the election to confirm the results.

Miller topped the polls for chairman capturing 303 of the over 727 votes casted. He captured 69 more votes than the next closest next candidate Mineli Young who got 234 votes. Other candidates were Eduarda Crescencio Arceo who got 108, Phillip Guizar who secured 53, and Marcial Alamina who got 29 votes .The six councilors that were elected are Enelda Rosado (404), Tracy Young (315), Julian Rosado (298), Ilda Marin (270), Ralph Humes (258) and Raul Young (243).

Despite being an election that was not politically polarized as is the case of many villages in other parts of the country, Minister of Tourism and Culture and Area Representative Manuel Heredia Jr was present, observing and speaking to his villagers as they entered the polls. Speaking to The San Pedro Sun, Heredia said that he is willing to work with any candidate elected. “The residents have tried to hold on to their tradition to conduct elections independently of political parties. I believe it’s a good process and one we must respect. What I am doing out here is just meeting the villagers as they come to the polls. Prior to today, I spoke to almost all the groups telling them that I wish them the best. I told them that whoever wins, and whoever the people of Caye Caulker elects, I am willing to work with them as part of my constituency,” said Heredia. He said that while speaking to the residents as they went to the polls, two key issues that electorates considered before determining their candidate of choice were issues of better roads and more beach restoration.

In an interview on the day of election, Wayne Miller was confident, indicating that people were receptive to him and his approach. “I do believe the people supported me and you can feel that from them that; they were honest in expressing so. What I see is the electorates were asking for in choosing a candidate is that they want good leaders. They carefully scrutinized and have looked at all the candidates and they decided who is the best person to lead this village forward,” expressed Miller, a full-time residents for 13 years and businessman of Caye Caulker. 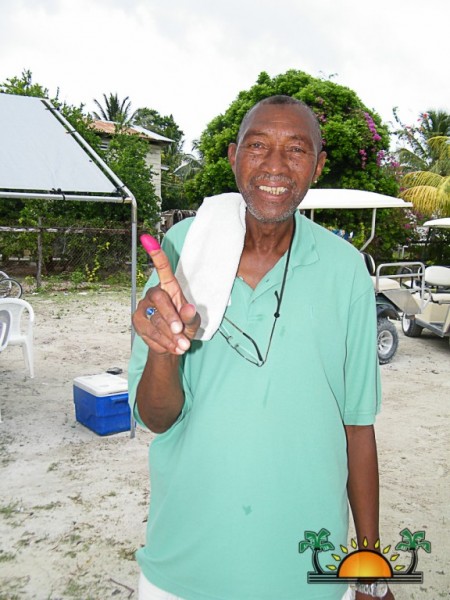 Following the elections, The San Pedro Town Council sent a congratulatory message to Miller and the six councilors.”The SPTC would like to congratulate Mr. Wayne Miller and his six village councilors on their triumph for the Village Council elections in our neighboring island, La Isla Cariñosa, Caye Caulker. We wish you all the best and a successful term.”